April 29, 2013 at 3:22 PM ET by Colleen Curtis
Twitter Facebook Email
Summary:
The President praised advances in science, engineering, infrastructure, innovation, education and environmental protection that can be attributed to the 150 years of work by the brilliant and committed scientists who have been elected and volunteered to serve their country. 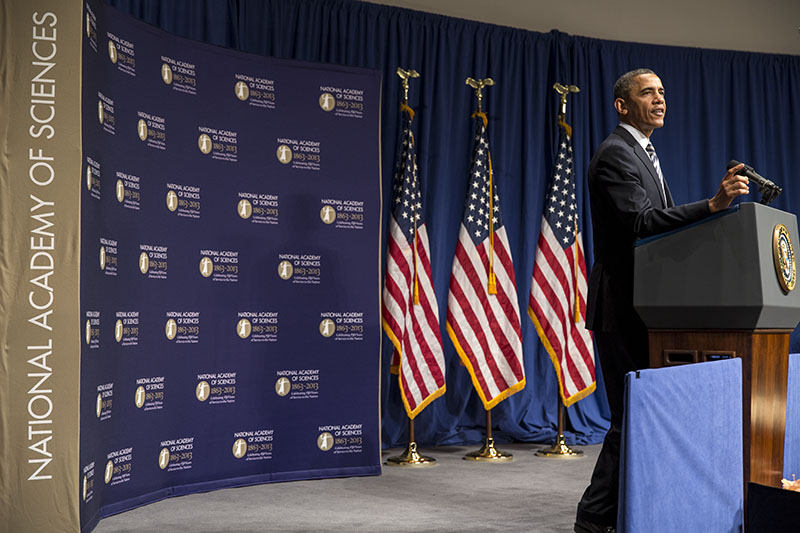 In March of 1863, President Lincoln and Congress established the National Academy of Sciences as an independent and nonprofit institution charged with providing the government with the scientific advice that it needed. Today President Obama joined the current members of that body to celebrate the advances in science, engineering, infrastructure, innovation, education and environmental protection that can be attributed to the 150 years of work by the brilliant and committed scientists who have been elected and volunteered to serve their country.

While the National Academy of Sciences was created during the Civil War to help the Union understand the challenges new iron-clad battleships would create for the Navy, President Obama praised President Lincoln's wisdom in looking forward and recognizing that finding a way to harness the highest caliber scientific advice for the government would serve a whole range of long-term goals for the nation. And he highlighted the Academy's legacy of answering big questions and solving tough problems for the benefit of the nation:

When you look at our history, you’ve stepped up at times of enormous need and, in some cases, great peril.

When Woodrow Wilson needed help understanding the science of military preparedness, he asked the Academy’s eminent scientists to lay it out for him. When George W. Bush, more recently, wanted to study the long-term health effects of traumatic brain injuries suffered by soldiers in Iraq and Afghanistan, he set your scholars to the task. Today, my administration relies on your expertise to answer critical questions like: How do we set our priorities for research? How can we get the most out of the nanotechnology revolution? What are the underlying causes of gun violence?

And more important than any single study or report, the members of this institution embody what is so necessary for us to continue our scientific advance and to maintain our cutting-edge, and that’s restless curiosity and boundless hope, but also a fidelity to facts and truth, and a willingness to follow where the evidence leads.

Find out about the Brain Initiative

Read about the Educate to Innovate initiative