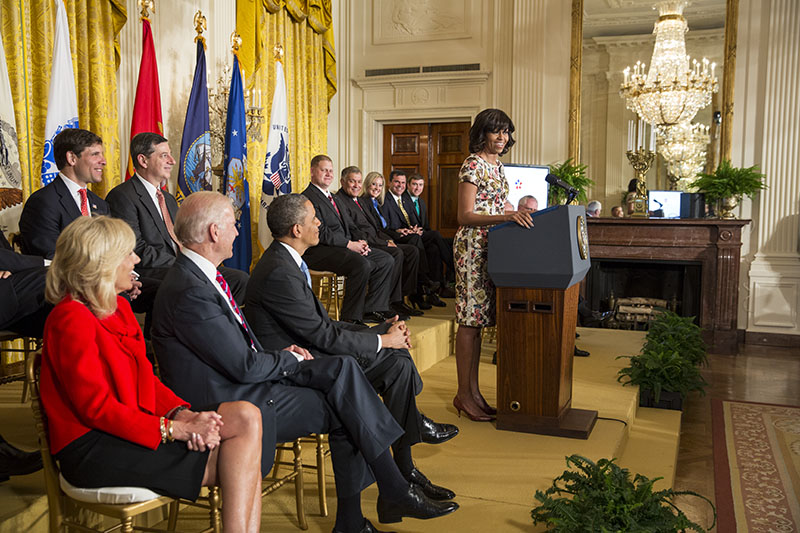 Two years ago, President Obama announced a challenge to the private sector to hire or train 100,000 unemployed veterans or their spouses by the end of 2013.

The First Lady announced that America’s businesses nearly tripled the goal set by President Obama and did so eight months early. The private sector has already hired or trained 290,000 veterans and military spouses.

The First Lady also announced that American companies have committed to hire or train another 435,000 veterans and military spouses over the next five years.

The First Lady also shared the stories of veterans who have successfully transitioned into second careers. For example, she shared the story of Staff Sergeant Shaun Murphy, an Army veteran who taught sixth grade special education in Delaware for Teach for America. Today, he leads TFA’s efforts to hire more veterans as teachers.  He said, “When you hang up those fatigues and put those boots away, you don’t want to feel like you’ve given up your sense of service.”

And Chryssy Johnson, who is an Army wife and mother. Her family moved around frequently because of her husband’s service, making it hard to keep a job. But USAA gave her an opportunity, and she is now senior financial foundations specialist pursuing her MBA.

With the Iraq war over and the war in Afghanistan drawing to a close, more than one million service members are projected to leave the military in the next several years and transition to civilian life.

Good civilian jobs not only help our veterans and military spouses manage this transition smoothly, but also demonstrate that our nation truly honors their service.

Even with all the wonderful announcements today, it is clear we have more work to do. We still need every business that has not yet joined this effort to make a commitment to hire or train our veterans and military spouses. Together, let’s work to serve our military families as well as they have served us.

Watch the video below or on YouTube to learn more about Joining Forces work to help veterans and military spouses find jobs: