May 2, 2013 at 4:00 PM ET by Cecilia Muñoz
Twitter Facebook Email
Summary:
On his trip to Mexico and Costa Rica, the President hopes to highlight and reinforce the deep cultural, familial, and economic ties that so many Americans share with Mexico and Central America, and to promote economic growth across the region.

Today, President Obama will make his fourth visit to Mexico and continue on to Costa Rica on what is also his sixth visit to Latin America. On this journey, the President hopes to highlight and reinforce the deep cultural, familial, and economic ties that so many Americans share with Mexico and Central America, and to promote economic growth across the region.

Ahead of these visits, President Obama convened two important consultations at the White House to hear from U.S. businesses and U.S. Latino leaders. The purpose of these meetings was to hear from business working directly in the region, and organizations with a particular interest in Latin America and its diaspora in the United States, about ways to foster economic development and growth for our shared future as a hemisphere.

Last Friday, a group of business leaders, representing a cross-section of companies doing business in Mexico and Latin America, held a lively discussion with the President. The meeting was a chance for the President to hear about emerging trends in the Western Hemisphere and what the United States government can do to foster economic growth in the Americas to help companies create jobs for middle class families on both sides of the border.

Business representatives offered strong support for measures intended to facilitate global and hemispheric trade, such as the Trans-Pacific Partnership. They highlighted the growing importance of the energy sector throughout the Americas and the need for infrastructure improvements to facilitate cross-border trade. The President made clear that immigration reform continues to be a top legislative priority this year; business leaders agreed on the need to enact commonsense immigration reform as quickly as possible. The meeting also underscored that increased trade throughout the region translates into jobs and growth here in America. 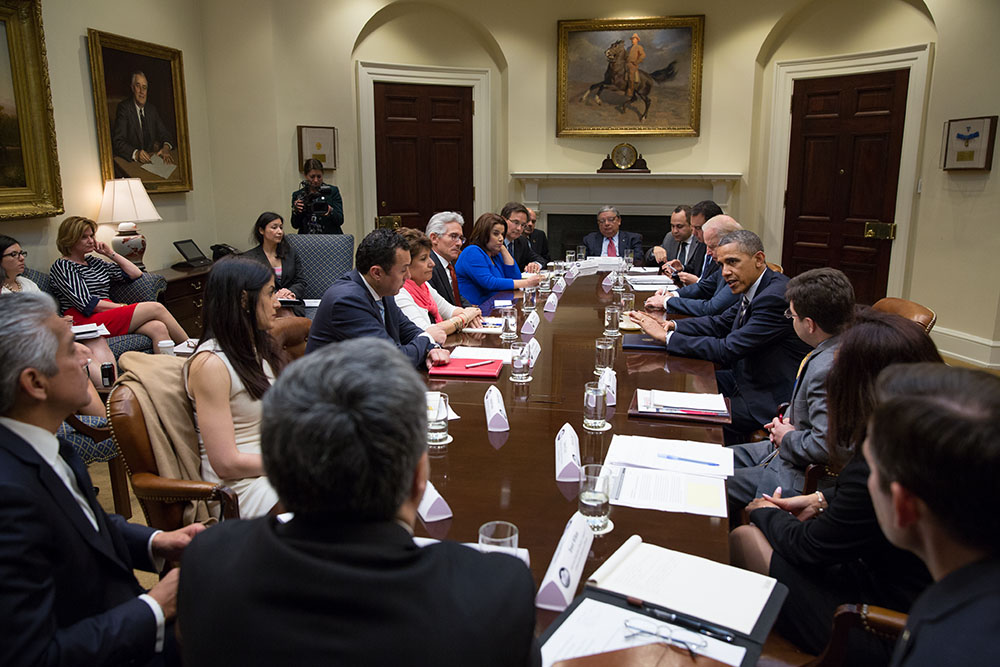 On Monday, the President met with Latino leaders who work both domestically and across borders to enhance social and economic development. The President heard various perspectives on how to strengthen collaboration in the region, further develop our economic relationship, and ideas for how the hemisphere can fit into broader strategic priorities. He emphasized that the long term trends in the hemisphere are clearly moving in the right direction, with growing middle classes, declining poverty and inequality in much of the region, and countries such as Mexico, Brazil, and Colombia taking a more active global role.

The Latino leaders offered support for the Administration’s current engagement with the region and emphasized the opportunity for job creation and economic growth that hemispheric integration could have in our country. Immigration reform was a backdrop for these conversations, just as it will factor into the President’s travels this week.

Over the next three days, the President will be traveling to Mexico City, Mexico and San Jose, Costa Rica. We hope you will follow @whitehouse, @lacasablanca and @nscpress for live updates from the President’s trip or get more information about the trip here.