May 6, 2013 at 3:36 PM ET by Matt Compton
Twitter Facebook Email
Summary:
President makes a pitch for civic connection -- for participation in public life, for engagement in national debates, for community service -- as he speaks to the Class of 2013. 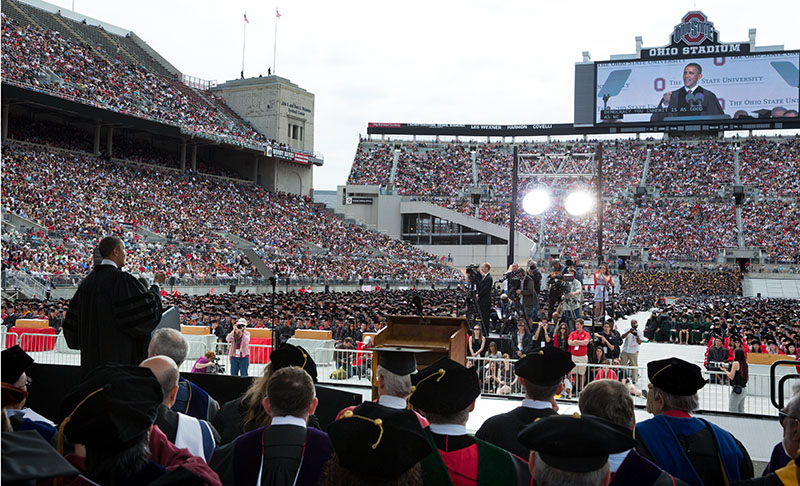 The Ohio State University is an institution that dedicates itself to “Education for Citizenship” -- the Buckeye motto emblazoned on the school seal.

So when President Obama spoke to the Class of 2013 at the school's graduation, citizenship was his theme.

"As citizens, we understand that it’s not about what America can do for us," he said. "It’s about what can be done by us, together, through the hard and frustrating but absolutely necessary work of self-government. And, Class of 2013, you have to be involved in that process."

The President made a pitch for civic connection -- for participation in public life, for engagement in national debates, for community service. He pointed to those who stand up in moments of crisis -- running toward the damage inflicted by the bombs in Boston to care for survivors, helping neighbors dig out from Hurricane Sandy last fall -- as examples.

"We've seen courage and compassion, a sense of civic duty, and a recognition we are not a collection of strangers; we are bound to one another by a set of ideals and laws and commitments, and a deep devotion to this country that we love," he said. "And that's what citizenship is."

Above all, he urged survivors to break through the cycle of cynicism that too often cripples progress in this country.

"Only you can make sure the democracy you inherit is as good as we know it can be," President Obama told the graduates. "But it requires your dedicated, and informed, and engaged citizenship. And that citizenship is a harder, higher road to take, but it leads to a better place."

Read the full remarks. Or watch the video: