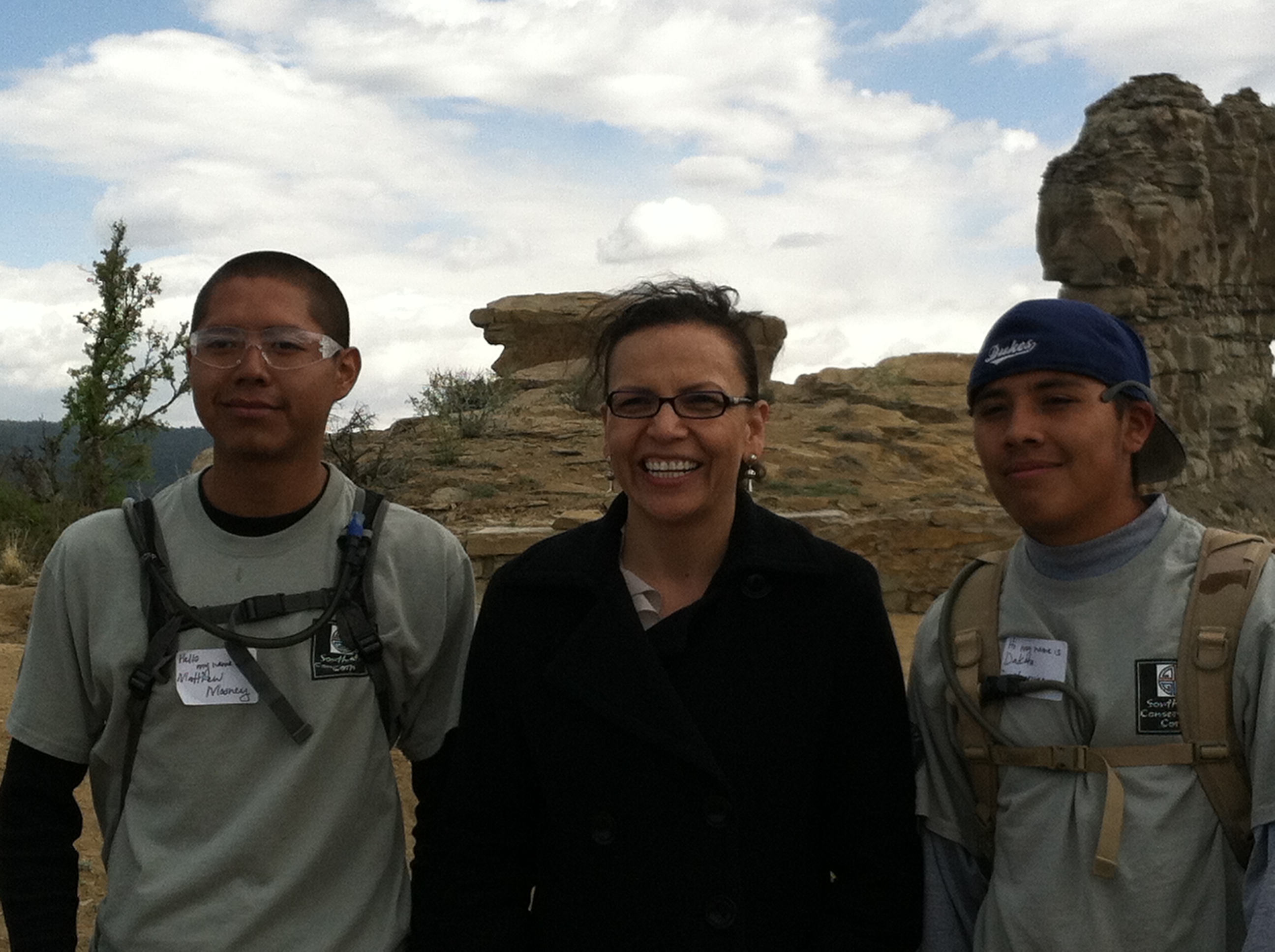 I recently had the honor of attending an event to mark the 2nd Anniversary of Let’s Move! in Indian Country at Chimney Rock National Monument in southwestern Colorado. I hiked and learned about this magnificent landscape on our way to the top with fifty youth from the Southern Ute Montessori Elementary, the Deputy Undersecretary of Agriculture Butch Blazer, and a handful of youth from the Pueblos who work with the Southwest Conservation Corps, an AmeriCorps partner organization that engages and trains a diverse group of young women and men and completes conservation projects for the public benefit.

I had lengthy conversations with Aaron Lowden, an Acoma Pueblo, regarding the strength and resiliency of the ancient people who built and lived in that space, and how their journey is connected to his own. Below I’d like to share some of his thoughts:

Our day began in the way I began this blog with a greeting to all attending the Let’s Move! in Indian Country (LMIC) 2nd Anniversary event and by saying a prayer. The prayer was done for the entire group before we entered the ancient Puebloan site of the recently designated Chimney Rock National Monument, CO.  It is as a sign of respect for those who came before to let them know we were there to learn from them. When we started at the trail head we were joined by Southern Ute schoolchildren, the Southwest Conservation Corps, the US Forest Service and US Department of Agriculture to celebrate the 2nd anniversary of LMIC. We were also joined by Jodi Gillette, the White House Senior Policy Advisor for Native American Affairs and Butch Blazer, the Deputy Under Secretary for Natural Resources and the Environment at the Department of Agriculture.

Finally, we were ready to do what we all came there to do: get outside and get active. Led by the Chimney Rock Interpretative Association guides, we hiked with anticipation to see the ruins. Walking through the Great Houses on steep inclined trails the group gained knowledge by experiencing the difficult and active living conditions of the original occupants of these sites. 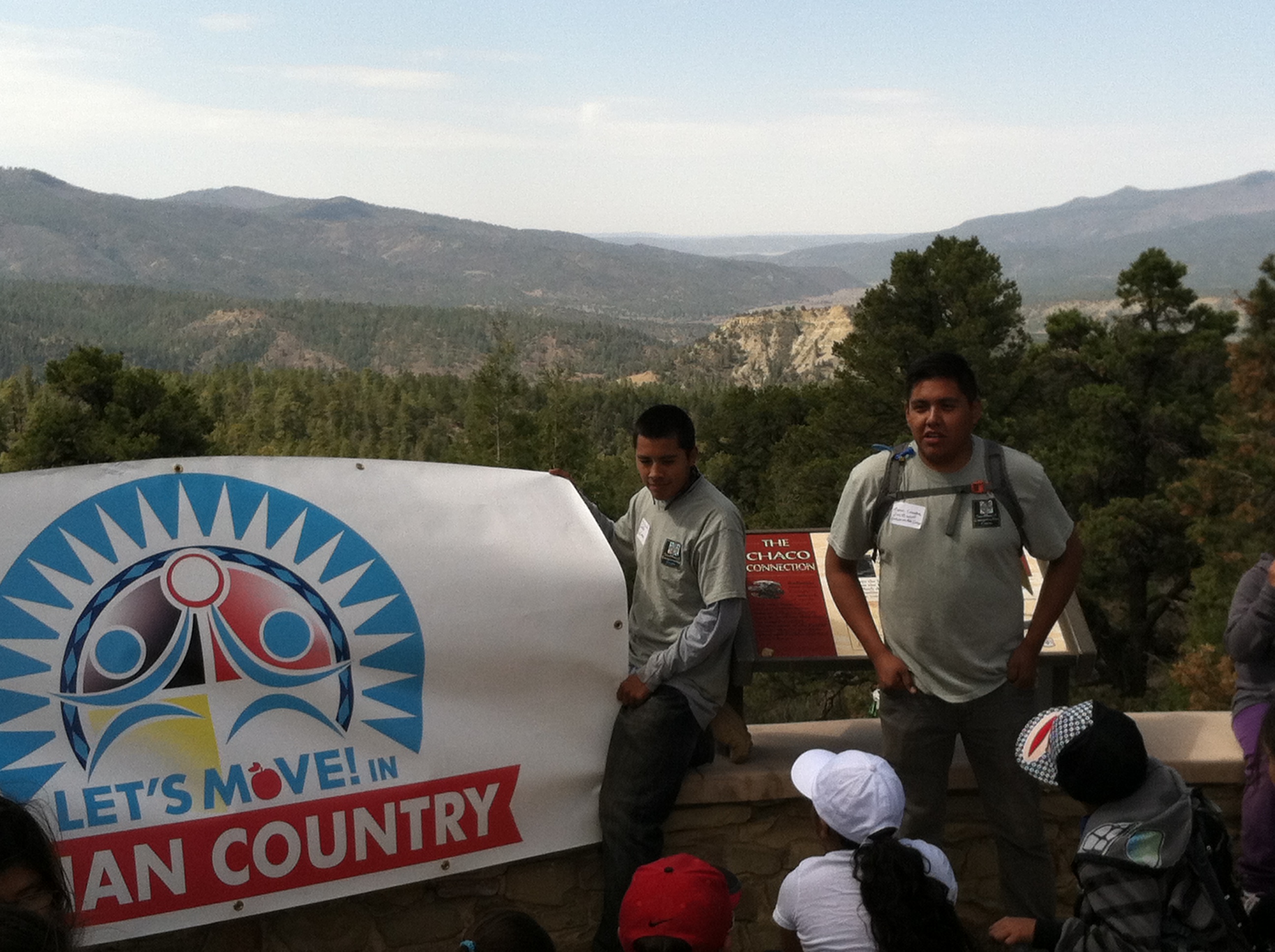 We learned how every single bit of rock and mortar had to be transported up to the top of this steep peak. If you were to talk with one of the ancestral inhabitants today and ask them about environmental stewardship, exercising, and eating right it’s reasonable to assume that they wouldn’t know what you were talking about, it’s just how they lived.

Today, Native Americans – particularly youth – have one of the highest obesity rates in the country. Although progress can be a good thing and has made our lives extensively easier, it is imperative that we keep these reminders and retain our old ways to have a healthy future as indigenous peoples. I feel this is even more appropriate when on the subject of Native American issues of our health and environmental stewardship. After all, if we can’t take care of the haatsi (land), how can we expect it take care of us.  By getting outside and being active in our country’s public lands, and by eating right and caring about where our food comes from, we can raise a healthier, more environmentally conscious generation.

After the group finished the hike, the Southwest Conservation Corps Ancestral Lands staff prepared a popular Pueblo dish: green chili stew. We were all ready to eat after our hike! Everyone enjoyed the nutritious meal and discussed the hike while the students played outdoors.

As the day winded down and once everything was finished, we all headed home thankful for the beautiful day we had been given.