May 9, 2013 at 2:23 PM ET by Tom Armstrong
Twitter Facebook Email
Summary:
Today, in conjunction with a series of landmark steps announced by the Obama Administration to unleash troves of useful data from the vaults of government, the interagency US Global Change Research Program (USGCRP) launched a new online tool that promises to accelerate research relating to climate change and human health—the Metadata Access Tool for Climate and Health, or “MATCH.”

Ed. note: This is cross-posted from the Office of Science and Technology Policy blog

Today, in conjunction with a series of landmark steps announced by the Obama Administration to unleash troves of useful data from the vaults of government, the interagency US Global Change Research Program (USGCRP) launched a new online tool that promises to accelerate research relating to climate change and human health—the Metadata Access Tool for Climate and Health, or “MATCH.”

The Administration announcements made today include an Executive Order signed by the President declaring that information is a valuable national resource and strategic asset, and a new government-wide Open Data Policy requiring that, going forward, data generated by the government shall be made available in open, machine-readable formats. The move will make troves of previously inaccessible or unmanageable data more readily available to entrepreneurs, researchers, and others who can use open data as fuel for innovation, businesses and new services and tools.

MATCH is one such tool, driven by open data, which could open the door for new scientific insights in the public health and climate science communities. It is a publicly accessible digital platform for searching and integrating metadata—standardized contextual information—extracted from more than 9,000 health, environment, and climate-science datasets held by six Federal agencies. 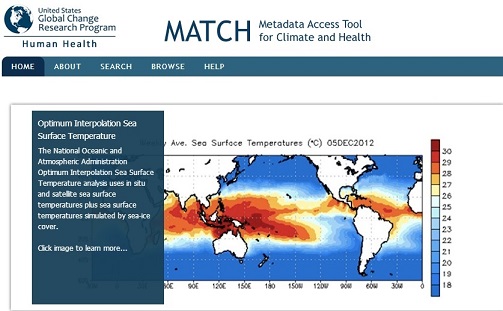 Screenshot of the Metadata Access Tool for Climate and Health (MATCH), the US Global Change Research Program's online tool for researchers that offers centralized access to metadata ‐ standardized contextual information ‐ about thousands of government-held datasets related to health, the environment, and climate-science.

The public health community has long recognized that environmental factors, including climate change, can have both direct and indirect impacts on human health. Increasingly severe heat waves, for example, have already wrought serious negative impacts on the elderly and other sensitive populations in parts of the United States and other regions of the world.

As climate change continues to boost the frequency and intensity of hurricanes, floods, and droughts—and as temperature shifts and related phenomena alter the endemic ranges of disease-carrying mosquitoes and other vectors—it has become more important to understand how these phenomena could affect—and in some cases already are affecting—the occurrence and severity of respiratory illness, allergies, infectious diseases, heat stroke, and other conditions that affect millions of people across the United States and in other nations.

MATCH will help researchers and public health officials integrate the latest information from across environmental and health disciplines in order to inform more effective responses to climate and health threats. For instance, using MATCH, a scientist can search metadata records to pinpoint environmental datasets about flooding frequency in a certain region of the United States and health datasets about outbreaks of waterborne diseases in the same location in order to investigate correlations between the two—a synthesis that could produce actionable insights for public health professionals, regional planners, and policy-makers.

MATCH is a product of interagency collaboration coordinated by USGCRP, involving the CDC, EPA, NASA, NIH, NOAA, and USGS, and based on input from members of the academic community, and professional groups such as the American Public Health Association and American Meteorological Society. Many of the metadata records now retrievable through MATCH—and their corresponding datasets—were previously in difficult-to-access agency archives or stored in non-interoperable formats.

MATCH is an important addition to the growing stores of datasets and data-processing tools being made available in open and machine-readable formats by the Obama Administration and whose expansion will accelerate under the Executive Order and Open Data Policy released today.

That policy—which is dedicated to making the government more transparent digital data more widely available to the public, entrepreneurs, and innovators while protecting confidentiality and security—promises to help scientists and researchers generate insights and products that protect health and improve lives.