May 10, 2013 at 5:20 PM ET by Megan Slack
Twitter Facebook Email
Summary:
With Mother’s Day just around the corner, President Obama talked to a group of women — including many moms — about the ways the Affordable Care Act is already helping millions of Americans. 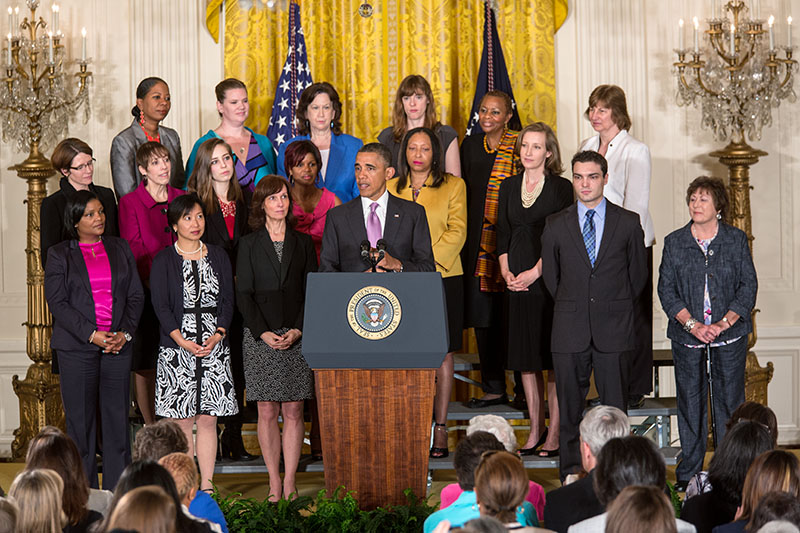 President Barack Obama delivers a statement on the Affordable Care Act in the East Room of the White House, May 10, 2013. (Official White House Photo by Lawrence Jackson)

With Mother’s Day just around the corner, President Obama today spoke to a group of women – including many moms – about the ways the Affordable Care Act is already helping millions of Americans like them.

"Women in particular now have more control over their own care than ever before," the President said. "And I’m pleased to be joined today by many women who wrote in to tell us what the Affordable Care Act means to them."

Carol was one of the women who wrote to the President, and today, she introduced him in the East Room. Carol's son, a 22-year-old college grad and traumatic brain injury survivor with a rare genetic lung disease, was able to stay on his family’s health insurance policy instead of being kicked off the plan this year. Finding coverage on his own would have been nearly impossible, as Carol wrote to the President: “Given his history, he would be virtually uninsurable under the old set of ‘rules.’  Instead of contemplating law school, all of his resources would have been channeled into somehow, somewhere, finding health insurance.”

Carol and her son are why the Affordable Care Act lets young people stay on their parent’s plan until they turn 26, President Obama said.

Alycia was also standing behind the President today.

"Alycia is the mother of Avey, who is a beautiful, sweet, 3-year-old girl who also happens to have Leukemia," he explained. "Imagine what that’s like for a parent. While you’re just figuring out how to take care of a baby, you’ve got to figure out how you’re going to pay for expensive treatment that could save your baby’s life.

"That’s why the Affordable Care Act made it illegal for bad actors in the insurance industry to discriminate against kids like Avey."

President Obama talked about a few more ways the Affordable Care Act is already helping people across the country.

“Insurance companies can no longer impose lifetime limits on the amount of care you receive, or drop your coverage if you get sick, or discriminate against children with preexisting conditions,” he said.  “And women now have access to free preventive care like checkups, and mammograms, and cancer screenings, so you can catch preventable illness on the front end.”

“Because of the Affordable Care Act, seniors on Medicare receive free checkups and preventive care with no co-pay or deductible, and get a discount on their prescription drugs,” he said. “That has already saved over 6 million seniors more than $700 each”

Insurers are now required to spend at least 80 percent of the money you pay in premiums on actual health care -– not on profits, not on overhead, but on you.  And if they fail to meet that target, they actually have to reimburse you -- either with a rebate or lower premiums.  Millions of Americans discovered this last year -- they opened an envelope from their insurance company that wasn’t a bill, it was a check.

“That’s already happened,” he added. “A lot of people don’t know it, but that’s what the Affordable Care Act is all about.”

President Obama also talked about some of the law’s provisions that will take effect in 2014.

Soon, bad actors in the insurance industry will never again be able to discriminate against you just because you’ve gotten sick in the past.  They can't discriminate against you because you've got a preexisting condition.  And, by the way, they can’t charge you more just for being a woman. Pregnancy will no longer be considered a preexisting condition.

And finally, beginning this fall, if you’re one of the millions of Americans who don’t have health insurance, you’ll finally have the chance to buy quality, affordable care just like everybody else.