May 13, 2013 at 5:02 PM ET by Matt Compton
Twitter Facebook Email
Summary:
The two leaders meet to discuss issues ranging from economic development to the unfolding conflict in Syria. 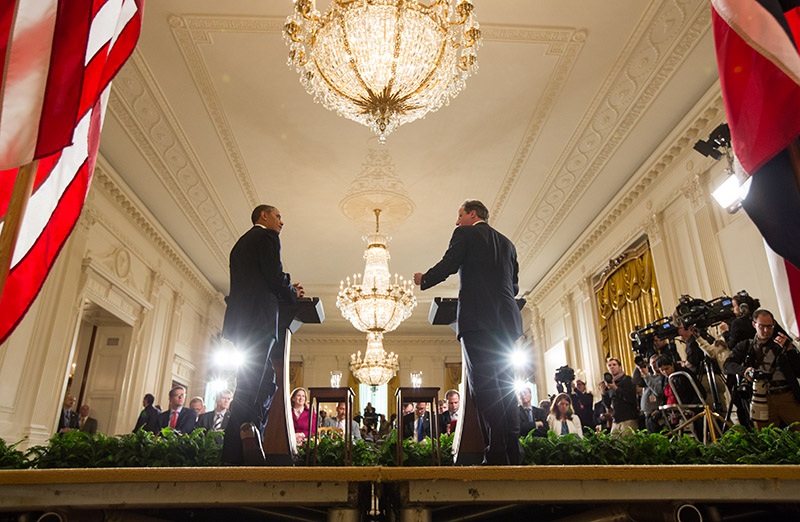 President Barack Obama and Prime Minister David Cameron of the United Kingdom hold a joint press conference in the East Room of the White House, May 13, 2013. (Official White House Photo by Chuck Kennedy)

"[T]he great alliance between the United States and the United Kingdom is rooted in shared interests and shared values, and it’s indispensable to global security and prosperity," President Obama said. "But as we’ve seen again recently, it's also a partnership of the heart."

The President thanked the people of the United Kingdom for their support in the wake of the bombings in Boston. In London, marathoners observed a moment of silence and dedicated their race to the victims in Massachusetts.

Prime Minister Cameron echoed the President's sentiments on the strength of the alliance between the United States and the United Kingdom.

"[The] relationship between Britain and the United States is a partnership without parallel," the Prime Minister said. "Day in, day out across the world, our diplomats and intelligence agencies work together, our soldiers serve together, and our businesses trade with each other."

In his remarks today, Prime Minister Cameron made a point to focus on three issues under discussion: the economy, the G8, and Syria. The United Kingdom currently holds the presidency of the G8 and will host the group's next summit in June -- in Northern Ireland.

Watch the full video of the press conference here: