May 13, 2013 at 5:51 PM ET by Nick Sinai and Haley Van Dyck
Twitter Facebook Email
Summary:
Yesterday, President Obama visited Austin, Texas, to kick off his Middle Class Jobs and Opportunity Tour. At Capital Factory, a local start-up incubator, he met with technology entrepreneurs and innovative companies that are helping grow our economy and create jobs by building new products and services. One of those companies, Stormpulse, uses freely available government weather data to help businesses protect themselves.

This article is cross-posted from the OSTP blog

Yesterday, President Obama visited Austin, Texas, to kick off his Middle Class Jobs and Opportunity Tour. At Capital Factory, a local start-up incubator, he met with technology entrepreneurs and innovative companies that are helping grow our economy and create jobs by building new products and services.

One of those companies, Stormpulse, uses freely available government weather data to help businesses protect themselves and their assets from potentially hazardous weather.  Stormpulse CEO Matt Wensing has said that “open government data is one of the giants on whose shoulders we stand.  Easier access to government data means growing companies like ours can offer significant value to citizens and enterprises.” 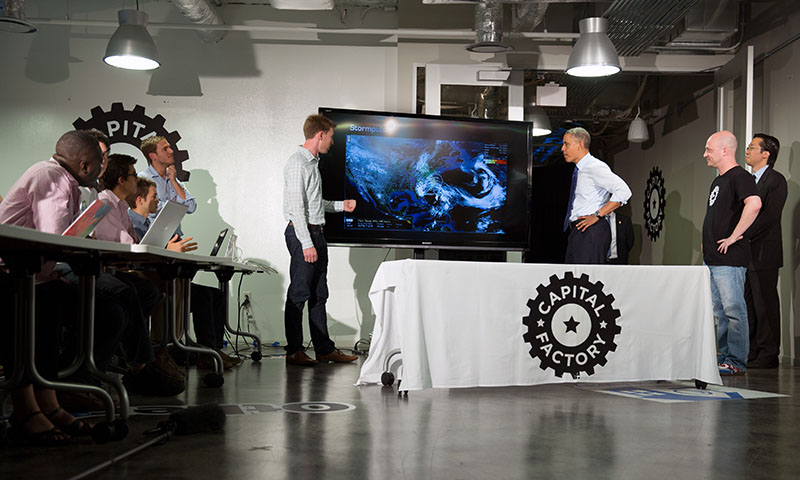 Indeed, earlier in the day, in a major step to provide innovative companies like Stormpulse with increased access to government data, the President signed a groundbreaking Executive Order and published a new open data policy requiring that going forward, data generated by the government be made available in open, machine-readable formats, while appropriately safeguarding privacy, confidentiality, and security.

Many innovators, entrepreneurs, and open government leaders across the country have embraced these historic steps. Below are selected statements of support:

Scott Chacon, Evangelist, GitHub: “Communities have been using GitHub for years to create software code, and it's amazing to see those practices, practices that embody a culture of openness, egalitarianism, and transparency being applied to the creation of White House’s Open Data policy as well. Technology is increasingly allowing us to blur the line between government and the public, bringing us to a tipping point where it is easier to work together than alone. If this is just the start, I can't wait to see where putting this kind of collaborative cultural technology in the hands of the already vibrant open government community is going to take us next.”

Ron Conway, Special Adviser to SV Angel: "The President has taken an historic step in making government more open and accessible to the people, just as the Founders intended. As tech entrepreneurs improve our lives through transformative innovations, open government data will be an important tool in their success."

David Eaves, Public Policy Entrepreneur, Open Government Activist, and Negotiation Expert: “The new "open data by default" executive order shows not only the White House's continued commitment to being a world leader in open data, but an effort to foster a 21st century government that is both more efficient and a more effective servant to the private, public and non-profit sectors.  Two things leave me particularly excited. The executive order positions both the United States government to be leaner and its economy to be more productive thanks to the reduced transaction costs of sharing open data. The emphasis on health, energy and safety data could improve lives and save money if entrepreneurs enable citizens to access this important information at key decision making moments.”

Hudson Hollister, Executive Director of the Data Transparency Coalition: "Open data, as the White House has defined it, will transform our government - by automating reporting processes; by bringing appropriators and managers granular spending and performance knowledge; and by enabling analytics to detect waste and fraud. Open data will also boost our economy - by providing actionable intelligence for investors; by streamlining compliance to energize private-sector productivity; and by creating untold opportunities for entrepreneurs and innovators to build the platforms and apps that will do all these things. Our members are eager to help implement the ambitious road map the Open Data Policy has laid out."

Carl Malamud, President, PublicResource.Org: “This memorandum is the most significant advance in information policies by the federal government since the passage of the Freedom of Information Act."

Sean Moulton, Director of Open Government Policy at the Center for Effective Government: “President Obama's executive order reaffirms the administration's commitment to transparency and lays a framework for agencies to improve public access to, and use of, government data. For too long, valuable public information has been locked away in file cabinets and poorly designed IT systems. Today's policy points a new way forward and takes concrete steps to make public information open by default. Properly implemented, this policy will allow Americans to know more about their government's activities and critical issues that affect their lives, including public health, safety, and the environment.   Access to this information is crucial to our democracy and the government's effectiveness. It allows Americans to actively engage in policymaking in a thoughtful, informed manner and to hold public officials accountable for decisions that impact us all.”

Beth Noveck, Founder and CEO, GovLab (and former US Deputy CTO):“The President's steadfast commitment to open government makes clear that the public's information must be accessible and reusable. Open data enables people to help government solve problems. We're on our way to tackling the hardest problem of all: rebuilding trust and partnership between government and citizens.”

Tim O’Reilly, Founder of O’Reilly Media (via Twitter): “Open data is to the 21st century as the highway system was to the 20th. POTUS recognizes this with an executive order…”

Kevin Richards, Senior Vice President of Federal Government Affairs, TechAmerica: “Access to the monumental amount of government data will fuel untold numbers of new innovative ideas in this country. By making open data the default policy of the entire federal government instead of discretionary, President Obama has handed the U.S. technology industry a key to expand our global leadership in this era of Big Data.”

Yaron Samid, Founder & CEO, BillGuard: “BillGuard is a national transaction monitoring and resolution network fueled by private and public sector consumer complaint data. Today's groundbreaking executive order to open government data will put millions of hard earned dollars back in the pockets of American citizens. We're grateful and proud of this forward-thinking administration and inspired by all the innovation that will come from today's order. Data drives innovation. Innovation drives economies.”

Jennifer Toney, CEO, WeMakeItSafer: “WeMakeItSafer builds web applications to help bridge the safety-information gap between manufacturers and their end-user customers. Since launching about two years ago and growing almost purely by word of mouth, our web apps have been used by a million people, preventing an estimated 3,000 injuries.  We would not have been able to accomplish this without the availability of government data related to product safety and recalls. We are thrilled that President Obama continues to make open data a priority and, with his recent Executive Order, we know that we will be able to more efficiently add new features and applications to better serve US consumers and companies in the future.”

John Wonderlich, Policy Director, Sunlight Foundation: “We're thrilled that the President (and some very dedicated staff) have been listening, and are aggressively pursuing a strong vision for what open data should mean. Changing the default to open takes more than political commitments and enthusiastic rhetoric, and today's new policies mark a new aggressive move to pursue that idea.”