May 15, 2013 at 4:26 PM ET by Cristin Dorgelo
Twitter Facebook Email
Summary:
The National Eye Institute (NEI) launched the Audacious Goals Initiative last year to drive innovation in vision research for the next decade and beyond. To encourage the broadest possible range of ideas and participants in this Initiative, the NEI held a prize competition to identify “Audacious Goals in Vision Research and Blindness Rehabilitation,” open to submissions from August through November 2012. 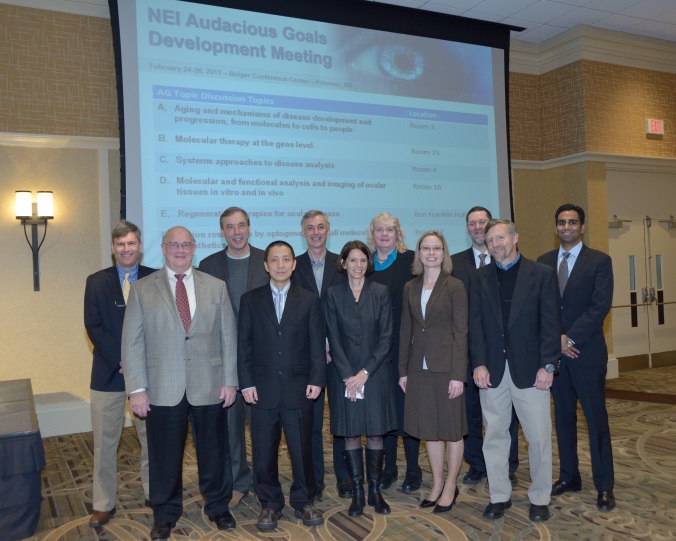 The National Eye Institute (NEI) launched the Audacious Goals Initiative last year to drive innovation in vision research for the next decade and beyond.

To encourage the broadest possible range of ideas and participants in this Initiative, the NEI held a prize competition to identify “Audacious Goals in Vision Research and Blindness Rehabilitation,” open to submissions from August through November 2012. The winners were invited to present their ideas in February at an NEI Audacious Goals Development Meeting—a gathering of more than 200 researchers and experts working to develop a set of bold goals that will guide vision research priorities for the NEI and other organizations going forward.

NEI’s approach makes good sense. Well-designed incentive prizes can harness the diverse expertise and perspectives of people who are not typically involved in a particular field. That’s why, with more than 250 prizes offered by more than 50 Federal agencies so far on Challenge.gov, incentive prizes are now a standard tool in every Federal agency’s toolbox to spur innovation and solve tough problems.

In addition, Grand Challenges like the audacious goals NEI plans to set forth are important elements of President Obama’s Strategy for American Innovation. In fact, just last month, the President called on companies, research universities, foundations, and philanthropists to join with him in identifying and pursuing Grand Challenges of the 21st century.

Below, Dr. Paul Sieving, director of the NEI at the National Institutes of Health, answers questions about the NEI Audacious Goals Initiative.

What is an audacious goal?

An audacious goal—in the context of vision research—is a bold, innovative idea that would fundamentally change vision research or vision care. We challenged vision researchers and the greater community of scientists, clinicians, and engineers to think about what may be possible, rather than what can be done now or what the next set of experiments in one lab might be. These ideas should have a broad impact, address the NEI mission, and be considered reachable in about 10 years. They also may require collaboration with researchers from multiple disciplines.

Why did you decide to use a competition to award cash prizes for audacious ideas?

The authority to offer prizes and challenges granted to Federal Agencies in the America COMPETES Act provides us with a new tool, not only to stimulate vision researchers to think differently, but to reach out to individuals in disciplines that do not typically participate in our planning and research. The challenge allowed us to attract ideas from new people with new perspectives.

How successful was your challenge in attracting audacious ideas from new sources? And, tell us about the winners.

NEI received 476 entries in our prize competition. Almost half of the submissions came from people who had never received NIH research funding.The winning ideas came from across the country: California, Oregon, Utah, Alabama, Missouri, Tennessee, Michigan, New York, Washington, and Massachusetts. About half of the winners were clinicians. The other half were research scientists.The winning entries fell into six themes that we used to organize the discussions at the Audacious Goals Meeting:

What process did you use to select the winning ideas?

Eighty-one clinicians and scientists with expertise in relevant disciplines evaluated the submissions according to the competition’s specific criteria, narrowing the submissions down to 81 entries, which then were sent for evaluation by a Federal judging panel. That panel met in January and selected our ten winners. The selection criteria during the judging process included relevance to the NEI mission, audaciousness, feasibility, scope, and potential for transformative impact.

What were the benefits of this program for NEI? Would you recommend this approach to other NIH Institutes and Federal agency program managers?

Without question, I recommend other Federal agencies consider prize competitions as a means to attract new people with new perspectives. As a tool to expand our strategic planning process, the NEI challenge was instrumental in alerting the vision research community that the NEI was taking a fresh approach to planning for the future. The buzz that surrounded the challenge was very effective in attracting input from leading researchers, engineers, philanthropists, patient advocates, and venture capitalists, many of whom had not previously received NIH funding.  The competition allowed us to reach out to everyone in the Nation—even those not engaged in vision research.  And offering a prize was a novel way to solicit new ideas, all for the benefit of spurring innovation and propelling vision research into the future.

When will you announce the final audacious goals that were defined and selected through this initiative?  What’s next after that?

The NEI, in consultation with our National Advisory Eye Council, is currently considering the presentations of proposed goals as well as other output that stemmed from the discussions at the Audacious Goals Development Meeting.  We expect to announce a final goal or set of goals in late spring or early summer 2013.  At that point, we will begin to chart how the NEI will encourage and support our research community to achieve these audacious goals.

In the meantime, you can watch this video to learn more about audacious goals in eye research:

Cristin Dorgelo is the Assistant Director for Grand Challenges at OSTP