Coming Together to Stop Slavery

May 17, 2013 at 5:28 PM ET by Valerie Jarrett
Twitter Facebook Email
Summary:
Today at the White House, we convened the 10th annual meeting of the President’s Interagency Task Force to Monitor and Combat Trafficking in Persons.

Today at the White House, we convened the 10th annual meeting of the President’s Interagency Task Force to Monitor and Combat Trafficking in Persons. Secretary of State Kerry led the meeting, which was attended by Cabinet secretaries and representatives from agencies including State, Justice, Defense, Labor, Human and Health Services, Homeland Security, Interior, Agriculture, Transportation, Education, as well as USAID, the Office of the Director of National Intelligence, the Equal Employment Opportunity Commission, Office of Management and Budget, and White House policy offices.

Each department, agency, and office shared their strategies to prevent trafficking, protect victims, prosecute offenders, and partner with civil society— both at home and around the world.

We reflected on the significant progress we have made over the last year, as well as the work left to do. 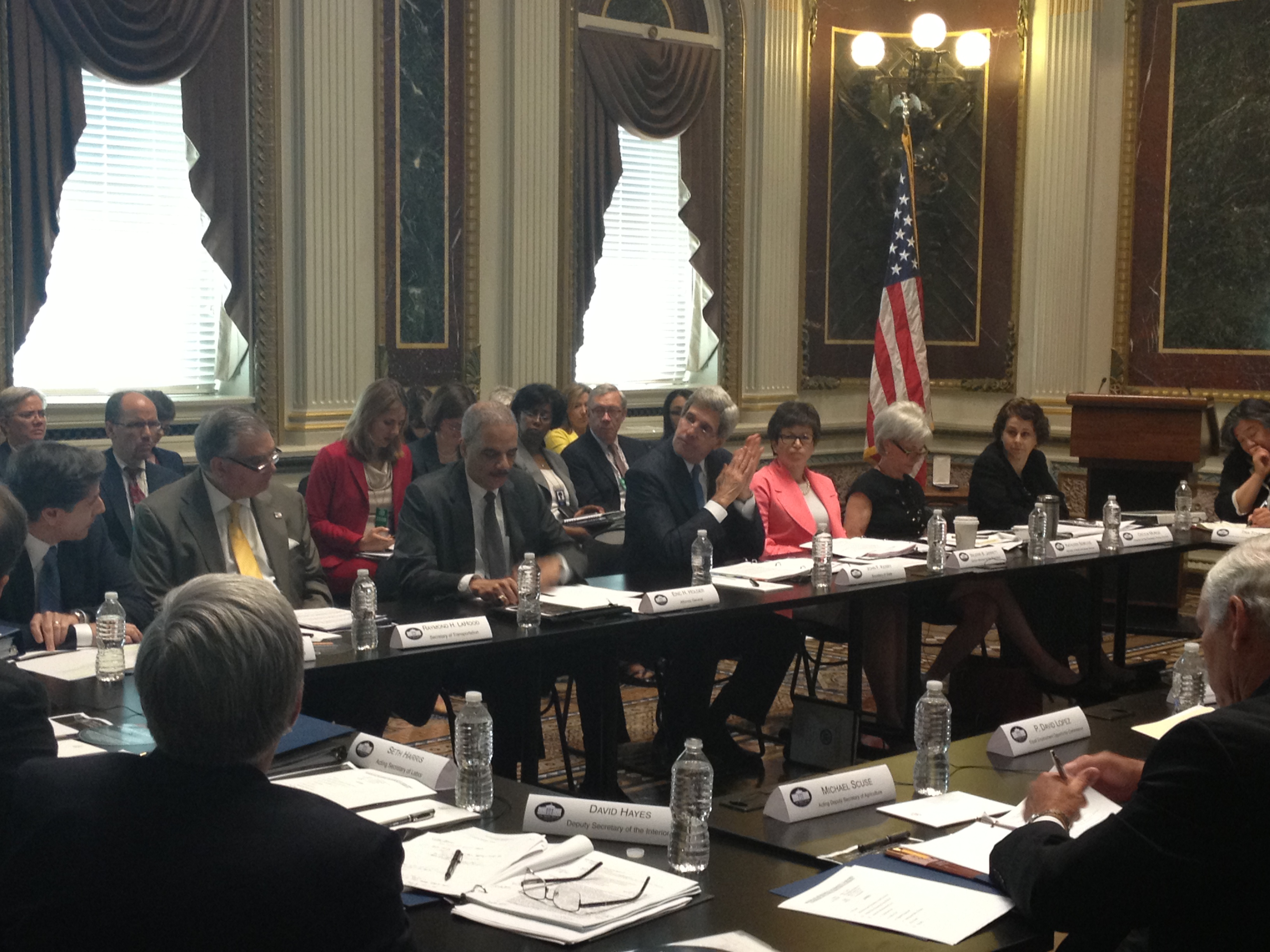 Cabinet secretaries, senior agency officials, and senior White House staff met at the White House as part of the President's Interagency Task Force to Monitor and Combat Trafficking in Persons on May 17, 2013. (Photo by Avra Siegel)

Last September, during his speech on human trafficking at the Clinton Global Initiative, President Obama announced several initiatives that build off the strong record of this task force.

These initiatives cover a wide range of areas, from government contracting regulation, to more coordinated responses to trafficking, to better victim services, to innovative public-private partnerships that will create technology tools for survivors and law enforcement.

The meeting today follows the first-ever White House Forum on Human Trafficking last month, as well as the convening of the President’s Advisory Council on Faith-Based and Neighborhood Partnerships that focus its entire report on human trafficking the next day. Furthermore, we celebrated the reauthorization of the Trafficking Victims Protection Act in March.

Today, we each committed to specific goals to combat trafficking.

First, we will implement our existing commitments, such as finalizing the victim services strategy, finalizing the T-Visa regulations, and implementing appropriate recommendations from the President’s Advisory Council on Faith-Based and Neighborhood Partnerships.

Second, we’ll continue to promote the rule of law to hold traffickers accountable. We will do this by ensuring law enforcement has the tools it needs at the state, local, federal and international levels. We will also seek to launch pilot technology projects that aid law enforcement and reach out to survivors.

Third, we will continue to make sure that our entire federal supply chain is free of trafficked labor. We’ll do this by implementing the Executive Order both at home and abroad.

And finally, we will develop a simple, straightforward way for citizens to report possible instances of human trafficking. We will reach out to schools and the general public to make sure everyone has the resources they need to stay vigilant and prevent their classmates, students, and neighbors from being trafficked.

Our goal is to finish these next steps by this coming September, which marks the one year anniversary of President Obama’s speech at the Clinton Global Initiative.

Today’s meeting was another step forward in our fight to end human trafficking. Together, we can create a future free of slavery.