May 19, 2013 at 4:33 PM ET by Megan Slack
Twitter Facebook Email
Summary:
President Obama delivers the commencement address to the 2013 graduates of Morehouse College in Atlanta, GA. 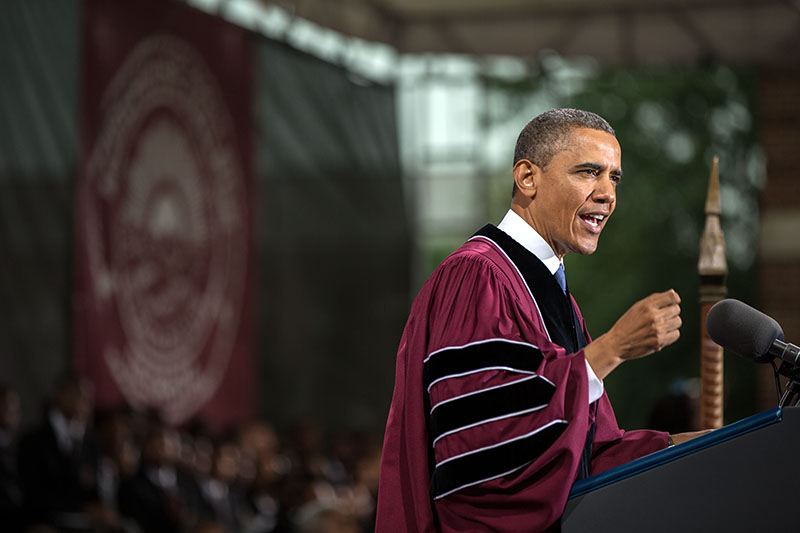 Today, President Obama delivered the commencement address to the 2013 graduates of Morehouse College in Atlanta, GA.

“It is one of the great honors of my life to be able to address this gathering here today,” President Obama told the graduates. He spoke about Morehouse’s history, and “ the unique sense of purpose that this place has always infused -- the conviction that this is a training ground not only for individual success, but for leadership that can change the world.”

“Your generation is uniquely poised for success unlike any generation of African Americans that came before it,” President Obama said.

But that doesn’t mean we don’t have work -- because if we’re honest with ourselves, we know that too few of our brothers have the opportunities that you’ve had here at Morehouse.  In troubled neighborhoods all across this country -- many of them heavily African American -- too few of our citizens have role models to guide them.  Communities just a couple miles from my house in Chicago, communities just a couple miles from here -- they’re places where jobs are still too scarce and wages are still too low; where schools are underfunded and violence is pervasive; where too many of our men spend their youth not behind a desk in a classroom, but hanging out on the streets or brooding behind a jail cell.

My job, as President, is to advocate for policies that generate more opportunity for everybody -- policies that strengthen the middle class and give more people the chance to climb their way into the middle class.  Policies that create more good jobs and reduce poverty, and educate more children, and give more families the security of health care, and protect more of our children from the horrors of gun violence.  That's my job. Those are matters of public policy, and it is important for all of us -- black, white and brown -- to advocate for an America where everybody has got a fair shot in life. Not just some. Not just a few. 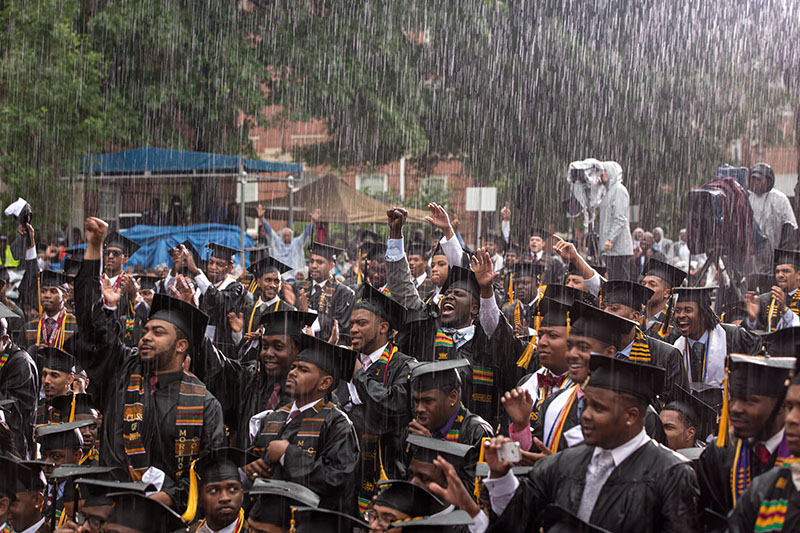 “But along with collective responsibilities, we have individual responsibilities,” the President said.  “As Morehouse Men, you now wield something even more powerful than the diploma you’re about to collect -- and that’s the power of your example. So what I ask of you today is the same thing I ask of every graduating class I address:  Use that power for something larger than yourself.”

So, yes, go get that law degree. But if you do, ask yourself if the only option is to defend the rich and the powerful, or if you can also find some time to defend the powerless. Sure, go get your MBA, or start that business.  We need black businesses out there.  But ask yourselves what broader purpose your business might serve, in putting people to work, or transforming a neighborhood.  The most successful CEOs I know didn’t start out intent just on making money -- rather, they had a vision of how their product or service would change things, and the money followed.

Some of you may be headed to medical school to become doctors.  But make sure you heal folks in underserved communities who really need it, too.  For generations, certain groups in this country -- especially African Americans -- have been desperate in need of access to quality, affordable health care.  And as a society, we’re finally beginning to change that.

Success may not come quickly or easily.  But if you strive to do what’s right, if you work harder and dream bigger, if you set an example in your own lives and do your part to help meet the challenges of our time, then I’m confident that, together, we will continue the never-ending task of perfecting our union.