Our Land of Limitless Opportunities

Nearly everyone in America has an immigration story to share. Our voices are louder when we speak together, so please share your stories and highlight the work that’s being done in your communities. Together we can achieve commonsense immigration reform. 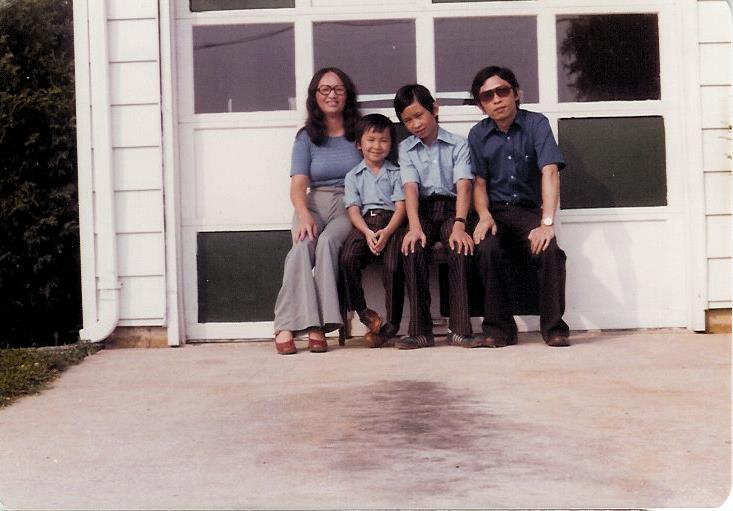 Dr. Nguyen is pictured with his mother, father and brother in 1976, shortly after their arrival to the United States. (by Personal Nguyen Family photo)

May is Asian American and Pacific Islander Heritage Month. For Vietnamese Americans, this time of year is an anniversary of great importance to us. Most Vietnamese Americans can trace their presence in the U.S. back to April 1975, the end of the Vietnam War. It is a bittersweet memory for us commemorating a time when we left all that we once held dear for an uncertain future. This is the time that we grieve for what was lost but exult in what was found.
My immigration story started in April 1975 when my mother, my four-year old brother, and I found ourselves stranded on a barge floating in the South China Sea. In the chaos that followed those final days of the South Vietnamese government, we were separated from my father. My memories of those days on the barge included the warm rain that fell down on us and the sound of crying, those of grown men who wept for their lost world and those of children who were scared and hungry. As a ten-year old, I remembered no fear, only the exhilaration that came with a new adventure. Looking back on the experience as a father of three, I can only shudder at the anguish, horror, and fear in my mother's mind.
Unlike many stories with this beginning, ours had a happy ending. We were picked up by a freighter ship, and within hours, we also found my father among four thousand other refugees. Reunited, my family began life in the U.S. in Pennsylvania, where there was no time for fear because survival kept us busy. Comfort could not even be found in food since ingredients for our familiar Vietnamese dishes were nowhere to be found. So, seeking warm weather and fish sauce, my parents were among the first groups of Vietnamese Americans to relocate to Santa Clara County, California, now home of the second largest Vietnamese community in the U.S.. Life for my parents remained hard; they were small business owners who worked 12 or more hours every day except for Christmas, New Year's, and Tết (Lunar New Year).
My parents’ journey and accomplishments laid the foundation for my own professional and personal path, which steered me to my current position as Professor of Medicine at the University of California, San Francisco (UCSF) and as a Commissioner on the President’s Advisory Commission on Asian Americans and Pacific Islanders. These are professional successes that amidst the storms and tears on that barge in the South China Sea, no one could have foreseen.
My story as a refugee to where I am today is not uncommon. There are many similar stories among Vietnamese Americans and other AAPI groups. According to the Department of Homeland Security, in 2011, approximately 58% of the refugees admitted to the United States were from Asian countries. Many immigrants contribute to the success of the U.S. through innovation and hard work. America gave my family and me a second chance, and continues to be a welcoming land of opportunity for everyone to achieve the American dream. America offers everyone the hope of limitless opportunities. Let us come and let us stay, for in return, we will bring the fresh perspectives and the blood, sweat, and tears that a great nation needs to continue to grow.
Immigrant stories are never finished. The stories of Asian, African, European, Middle Eastern, Mexican, Central American, and other immigrants to this country must tell what their descendants are accomplishing now, as those are the next chapters in their stories. The accomplishments of our descendants are the immigrants’ reward for giving up everything we knew for a future that is limitless for ourselves and our children.

Dr. Tung Thanh Nguyen is a member of the President’s Advisory Commission on Asian Americans and Pacific Islanders.  Dr. Nguyen is also a Professor of Medicine at the University of California, San Francisco.