President Obama Responds to the Tornadoes in Oklahoma

May 22, 2013 at 3:15 PM ET by Ezra Mechaber
Twitter Facebook Email
Summary:
This evening the President spoke with Oklahoma Governor Mary Fallin to express his concern for those who have been affected by the severe weather beginning last night and continuing today.

Ed. Note: You can help people affected by the recent tornadoes through American Red Cross Disaster Relief. If you are in the affected areas, click here to apply for assistance and learn about other resources that are available to you. Check back here for more information — we'll continue updating this post as the response effort develops.

President Obama continues to receive updates on the response to the devastating tornadoes in Oklahoma, and continues to direct his team to provide all available resources to support state and local partners leading the response.

More than 400 federal personnel remain on the ground in the impacted area, including teams that are working directly with families and individuals who were affected by the tornadoes.  As of last night, more than 2,200 individuals impacted by the tornadoes had registered with FEMA for direct assistance available through the major disaster declaration provided Monday night. (For those in affected areas, find out how to apply for assistance here or learn about other resources available to you)

According to FEMA, since Monday night, the national Urban Search and Rescue teams completed searches of more than 1,200 structures in the affected area.

FEMA and federal partners have established an Incident Support Base to stage commodities. More than 127,000 liters of water and nearly 30,000 meals have been delivered to the state to support response efforts.

Update 2: Press Secretary Jay Carney announced in today's briefing that on Sunday, May 26, President Obama "will travel to the Oklahoma City area to see firsthand the response to the devastating tornadoes and severe weather that have impacted the area on Sunday night and Monday. He will visit with affected families as well as thank first responders."

Update 1: Overnight, the President continued to receive updates from his team on the ongoing response in Oklahoma. Following yesterday's call to the Mayor of Moore Oklahoma, Glenn Lewis, the President spoke again to Governor Fallin expressing his concern for those who had been impacted and to reiterate that he had directed his Administration to provide all available resources to support the response led by the Governor and her team. Last night, the President also spoke with Senator James Inhofe to make clear that FEMA stood ready to continue to support the people of Oklahoma through the immediate response phase as well as the recovery, and to let the Senator know that Oklahomans remained in his thoughts and prayers.

On Tuesday, at the President’s direction, FEMA Administrator Craig Fugate arrived in Oklahoma to ensure that federal resources were effectively supporting the response efforts. Administrator Fugate is on the ground again today, and this morning Homeland Security Secretary Janet Napolitano will also travel to the affected area to meet with local officials and see ongoing response efforts first hand.

As of this morning, FEMA has more than 400 personnel already on the ground supporting the response, including three national Urban Search and Rescue Teams, an Incident Management Assistance Team, as well as personnel focused on helping survivors register for and receive the federal assistance made available by the major disaster declaration signed by the President on Monday night. As of 2 a.m. this morning, more than 1,000 individuals affected by the tornadoes and severe weather in Oklahoma had registered for assistance with FEMA.

The President received a briefing this morning by his team, and will continue to be updated on the response throughout the day. 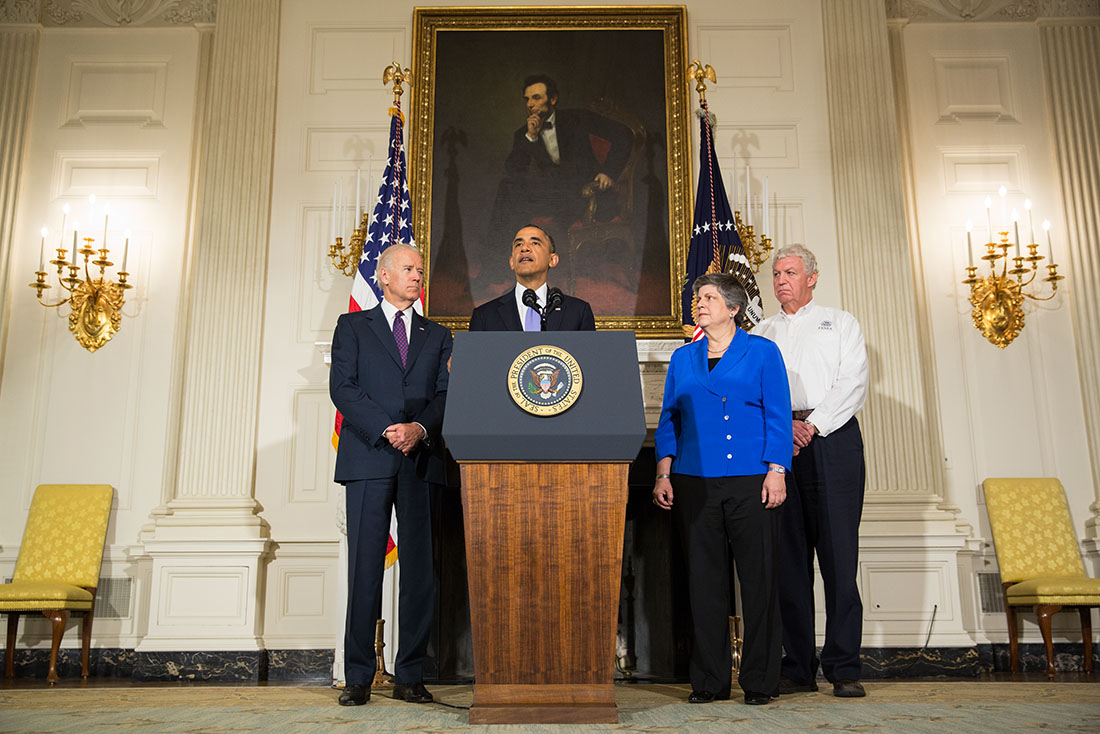 Update 3: As response and recovery efforts continue on the ground in Oklahoma, the Department of Homeland Security announced this afternoon that Secretary Janet Napolitano will travel to the area tomorrow to meet with state and local officials and ensure first responders are receiving the assistance they need to help those affected by the tornadoes.

Update 2: This morning, President Obama delivered a statement on the devastating tornadoes and severe weather that impacted Oklahoma. He described the response efforts underway, and assured the people of Moore and all the affected areas that they "would have all the resources that they need at their disposal."

For there are homes and schools to rebuild, businesses and hospitals to reopen, there are parents to console, first responders to comfort, and, of course, frightened children who will need our continued love and attention. There are empty spaces where there used to be living rooms, and bedrooms, and classrooms, and, in time, we’re going to need to refill those spaces with love and laughter and community.

"Americans from every corner of this country will be right there with them, opening our homes, our hearts to those in need," President Obama said. "Because we're a nation that stands with our fellow citizens as long as it takes. We've seen that spirit in Joplin, in Tuscaloosa; we saw that spirit in Boston and Breezy Point. And that’s what the people of Oklahoma are going to need from us right now."

Watch the full statement below or read the remarks here.

Update 1: The President continued to receive updates overnight from his team on the ongoing response to the devastating tornados and severe weather that impacted Oklahoma Sunday night and Monday. Last night, following his call to Governor Mary Fallin, the President also spoke with Congressman Tom Cole to express his concern for those who had been impacted and his deep condolences for the many who have lost loved ones as a result of the horrible tornados. The President praised the brave first responders, and made clear that the country would stand behind the people of Oklahoma as they continued to respond and recover. 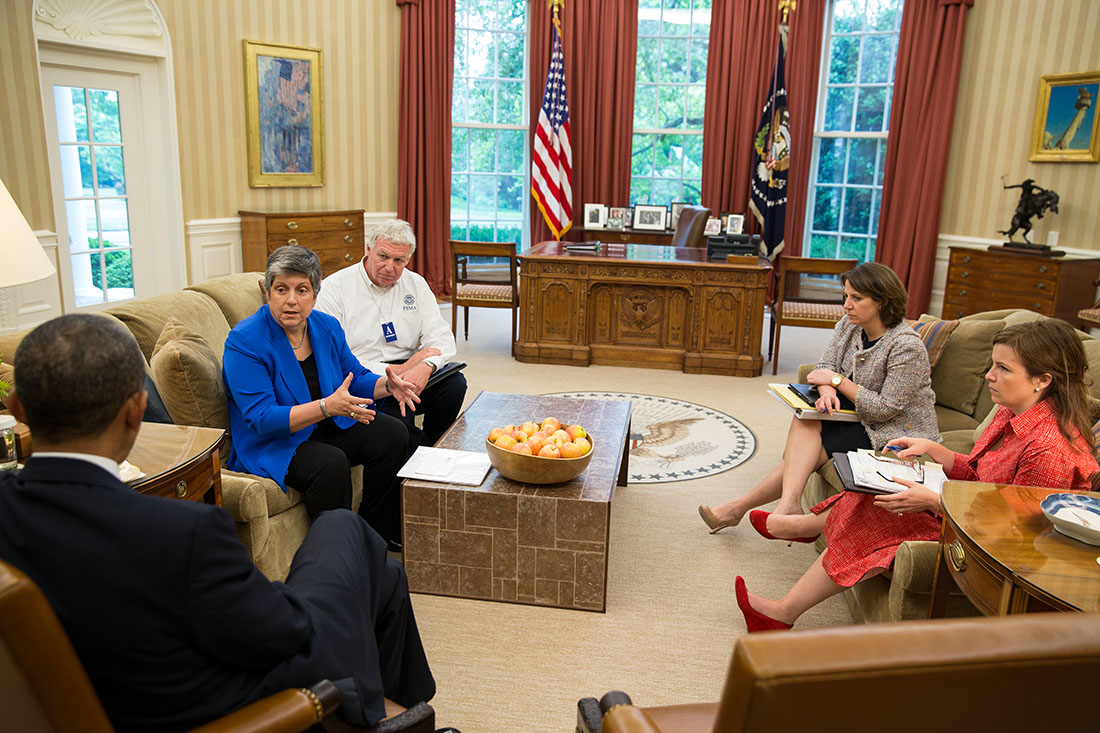 President Barack Obama receives a briefing on the ongoing response to the devastating tornadoes and severe weather that impacted Oklahoma, in the Oval Office May 21, 2013. The President meets with, from left: Homeland Security Secretary Janet Napolitano; Richard Serino, FEMA Deputy Administrator; Lisa Monaco, Assistant to the President for Homeland Security and Counterterrorism; and Alyssa Mastromonaco, Deputy Chief of Staff for Operations. (Official White House Photo by Pete Souza)

This evening, the President spoke with Oklahoma Governor Mary Fallin to express his concern for those who have been affected by the tornadoes last night and continuing today. 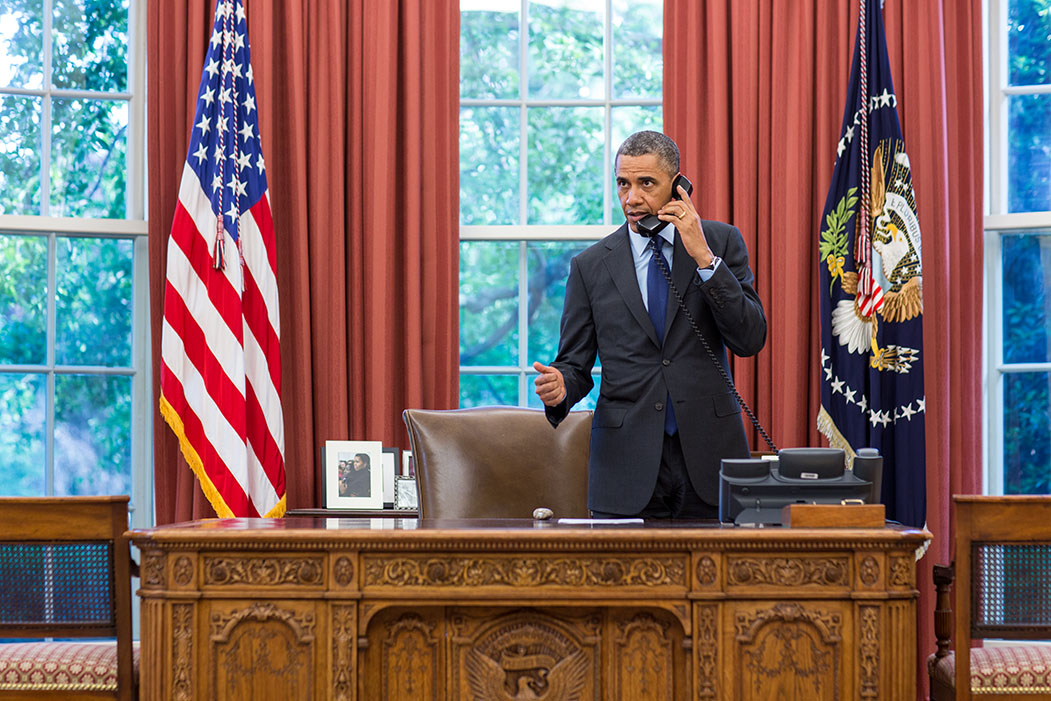 President Barack Obama talks on the phone with Oklahoma Governor Mary Fallin in the Oval Office, May 20, 2013. The President spoke with Gov. Fallin to express his concern for those who have been affected by the severe weather beginning last night and continuing today. (Official White House Photo by Pete Souza)

As the President told Governor Fallin tonight, the administration — through FEMA — is committed to providing all the assistance it can to Oklahoma as the response effort unfolds. Already, FEMA has deployed an Incident Management Assistance Team, Urban Search & Rescue Teams, and an Medical Emergency Response Support Team to provide resources to hard-hit areas in Oklahoma.

FEMA is urging those in impacted areas to listen carefully to instructions from local officials, and to take the recommended protective measures. Residents should monitor local radio or TV stations, or the National Weather Service at www.weather.gov.

As the response effort develops, here is a list of resources for those affected: