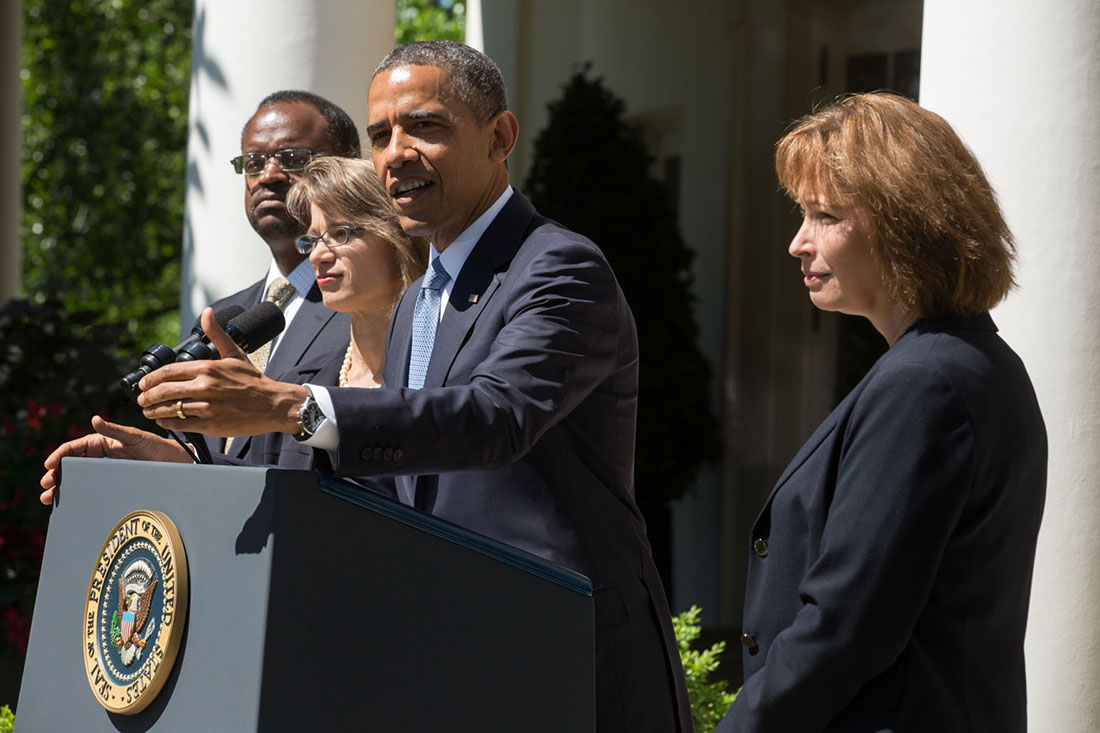 President Barack Obama delivers a statement announcing the nomination of three candidates for the U.S. Court of Appeals for the District of Columbia Circuit, in the Rose Garden of the White House, June 4, 2013. Nominees from left are: Robert Leon Wilkins, Cornelia "Nina" Pillard, and Patricia Ann Millett. (Official White House Photo by Chuck Kennedy)

Today, President Obama announced that he is nominating three candidates for the United States Court of Appeals for the District of Columbia Circuit: Patricia Millett, Nina Pillard and Robert Wilkins.

As the President explained, one of his most important responsibilities is nominating qualified men and women to serve as judges on the federal bench. And the Senate has a constitutional duty to promptly consider judicial nominees for confirmation.

“Throughout my first term as President, the Senate too often failed to do that,” President Obama said. “Time and again, congressional Republicans cynically used Senate rules and procedures to delay and even block qualified nominees from coming to a full vote.

“As a result, my judicial nominees have waited three times longer to receive confirmation votes than those of my Republican predecessor.”

In fact, Caitlin Halligan, who President Obama nominated in 2010 to serve on the D.C. Circuit Court, waited more than two and a half years without being confirmed by the Senate – so long that she asked the President to withdraw her nomination.

“The D.C. Circuit is known as the second highest court in the country, and there’s a good reason for that,” the President said. “The judges on the D.C. Circuit routinely have the final say on a broad range of cases involving everything from national security to environmental policy; from questions of campaign finance to workers’ rights. In other words, the court’s decisions impact almost every aspect of our lives.”

And, of the 11 seats on the D.C. Circuit Court, President Obama explained today, there are currently three vacancies. "If we want to ensure a fair and functioning judiciary, our courts cannot be short-staffed,” he said.

An essential part of our democracy is the separation of powers. The executive, the legislative, and the judiciary each have a role to play.  And when it comes to judicial nominees, my responsibility is to put forward qualified individuals. These are three of the most qualified individuals you'll ever meet.  The Senate's responsibility, in turn, is to promptly give them an up or down vote.

So today, I'm doing my part. I hope in the coming months that the Senate does its part, because I assure you, when these three outstanding individuals are on the bench, they will do their part. That’s what the Constitution demands.  It's what the American people expect.  And I look forward to years of outstanding service by these outstanding lawyers of incredible integrity.