Our patent system — as enshrined in our Constitution — is meant to encourage innovation and invention. It was designed to reward Americans for their hard work, risk-taking and genius. It has spurred progress that has driven economic growth and transformed the way we live, work, communicate, and stay healthy. But in recent years, there has been an explosion of abusive patent litigation designed not to reward innovation and enforce intellectual property, but to threaten companies in order to extract settlements based on questionable claims.

There are a growing number of companies, commonly called “patent trolls,” who employ these litigation tactics as a business model — costing the economy billions of dollars and undermining American innovation. In the last two years, the number of lawsuits brought by patent trolls has nearly tripled, and account for 62% of all patent lawsuits in America. All told, the victims of patent trolls paid $29 billion in 2011, a 400% increase from 2005 — not to mention tens of billions dollars more in lost shareholder value.

Today we are releasing a study on the issue that documents the significant toll this issue is taking on our economy and on innovation, and we are excited to announce both Executive actions the Obama Administration is taking, and the legislative measures that we are calling on Congress to pass to protect American innovators.

Last February during his Fireside Hangout, the President explained that patent trolls (known more formally as Patent Assertion Entities, or PAEs) “don’t actually produce anything themselves. They’re just trying to essentially leverage and hijack somebody else’s idea and see if they can extort some money out of them.” This type of abusive patent litigation is a major problem.

It’s also important to know what we’re not talking about here. We aren’t trying to make it harder to pursue legitimate intellectual property rights, or vigorously defend valid patents. Indeed, the United States has the best intellectual property protections in the world, and our system rightly ensures that these innovators are compensated for their creativity. The problem is when rogue companies make a business model out of exploiting and abusing the system, using it not to protect invention but to bring frivolous lawsuits to extract settlements from companies trying to serve American consumers. Bad patents in the system (such as those issued with broad or vague language) only compound the problem, and the issue extends far beyond any one industry.

This is a problem we’re hearing a lot about, from multinational corporations and venture capitalists to garage innovators and small-town café owners. Businesses of any size are vulnerable to these tactics, whether you’re a software giant designing complex applications or a mom-and-pop store using a technology product you purchased over the counter.

How big of a problem are patent trolls? Consider this: last year we estimate that patent trolls sent out over 100,000 demand letters, threatening everyone from Fortune 500 companies to corner coffee shops and even regular consumers to pay a settlement or face a day in court. The number of these suits has exploded in recent years. 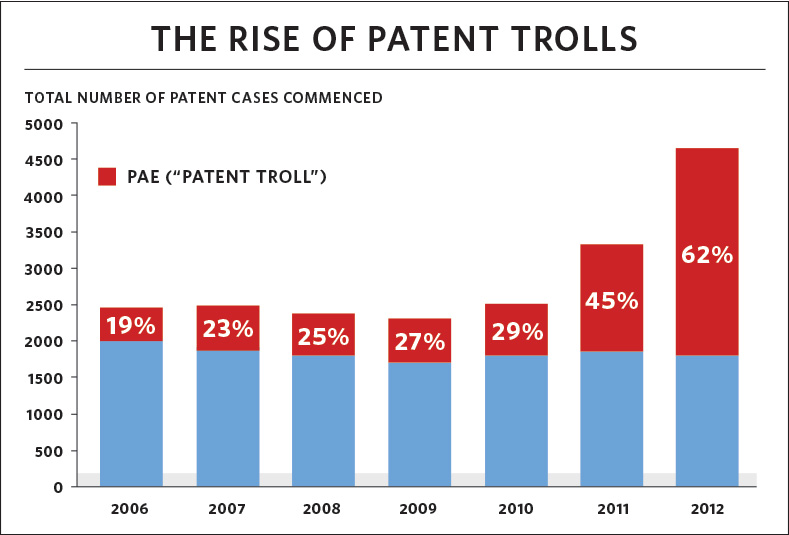 But this is about more than just the company bottom-line: when businesses need to constantly worry about abusive patent litigation they are able to put less of their efforts into creating new products and serving customers. Today, some of the largest innovators in high-tech spend more money on patent litigation and acquisition than they do on research and development for new products. Smaller companies are getting hit just as hard, and 40% of technology startups targeted by patent trolls reported a significant impact on their business operations due the suit or threat thereof.

It’s clear that the abuse of the patent system is stifling innovation and putting a drag on our economy. The trolling has gotten out of control, and it’s time to act.

We are excited to announce these steps to give innovators a fair fight in the legal battle against patent trolls, bring clarity to the high-tech patent space, and protect the everyday citizen against their abusive tactics. We look forward to, with your support and the input of everyone affected by this issue, helping make America an even better place to innovate.

[Addendum: In March 2016, the Administration released an addendum to this report, which is available at https://obamawhitehouse.archives.gov/sites/default/files/microsites/ostp/PatentReportAddendumMarch2016.pdf.]