Good News: Americans Saved Billions Thanks to the Affordable Care Act – And Medical Loss Rebates Are On the Way

According to a new report, Americans buying individual market health insurance saved $1.2 billion in 2011 and $2.1 billion in 2012 because law has begun to hold insurance companies accountable.

Under the Affordable Care Act, insurance companies are required to spend 80 to 85 percent of premium dollars on medical care and health care quality improvement, rather than on administrative costs. If they don’t, the insurance companies must provide a rebate to their customers. Last year, over 13 million consumers received $1.1 billion in rebates – the average consumer rebate was around $151.

Today a new analysis from the Kaiser Family Foundation provides the most complete look yet at the benefits of the policy. In addition to rebates from insurers who are charging more for overhead than care (those with medical loss ratios below 80 percent), the report estimates the savings that resulted from insurers exceeding 80 percent, who provided more value for each consumer dollar than history shows they otherwise would have.

And the 2012 rebates for consumers are on their way. While final rebate totals are still being tallied, some States are reporting early results. According to the Los Angeles Times, so far, insurers in California will provide rebates totaling $44.5 million by August. For example, Blue Shield of California will provide $24.5 million in rebates to 29,000 small businesses with 90,000 enrollees. Kaiser Permanente will provide $2.7 million to 66,000 enrollees in the individual market

In addition to these rebates, consumers are also seeing the type of premium savings that the Kaiser report describes. According to The Tennessean, Blue Cross Blue Shield of Tennessee provided its enrollees with rebates of $8.6 million for 2011 because its medical loss ratio was 76.6 percent for individual policy holders. However, in 2012, it improved its medical loss ratio to 83.1 percent – providing significantly more health care and quality for their consumers’ dollars.

In the coming month, the Department of Health and Human Services will report on the final rebates for 2012 which insurers must provide by August 1, 2013. And later this summer, we’ll add to the early results of health care law’s rate review policy that requires insurers to justify double-digit rate increases: according to data from the beginning of the year, the proportion of proposed rate increases of 10 percent or more dropped from 75 percent in 2010 to 14 percent in 2013. Meanwhile, today’s report is yet another reminder of how the health care law is working to lower health care costs for American people. 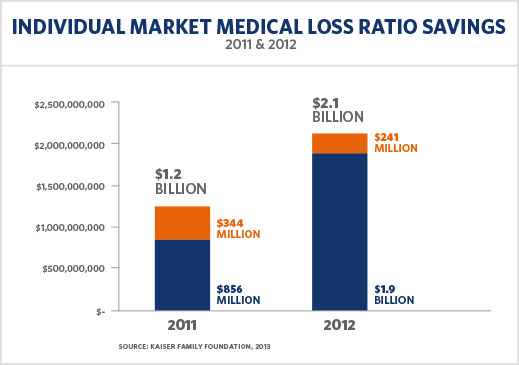