June 7, 2013 at 9:30 AM ET by Alan Krueger, Alan B. Krueger
Twitter Facebook Email
Summary:
Today’s report from the Bureau of Labor Statistics (BLS) indicates that private sector businesses added 178,000 jobs last month. Total non-farm payroll employment rose by 175,000 jobs in May. The economy has now added private sector jobs every month for 39 straight months, and a total of 6.9 million jobs has been added over that period.

Today’s report from the Bureau of Labor Statistics (BLS) indicates that private sector businesses added 178,000 jobs last month. Total non-farm payroll employment rose by 175,000 jobs in May.  The economy has now added private sector jobs every month for 39 straight months, and a total of 6.9 million jobs has been added over that period. So far this year, 972,000 private sector jobs have been added.

The household survey showed that the unemployment rate ticked up to 7.6 percent in May from 7.5 percent in April. However, the labor force participation rate also rose by 0.1 percentage point to 63.4 percent in May, as 182,000 more unemployed workers reentered the labor force in May than in April, a sign that more workers felt encouraged to search for a job.

With the recovery gaining traction, now is not the time for Washington to impose self-inflicted wounds on the economy. The Administration continues to urge Congress to replace the sequester with balanced deficit reduction, while working to put in place measures to create middle-class jobs, such as by rebuilding our roads and bridges and promoting American manufacturing.  The President will continue to press Congress to act on the measures he called for in his State of the Union address to make America a magnet for good jobs, help workers earn the skills they need to do those jobs, and make sure their hard work leads to a decent living.

According to the establishment survey, in May employment rose notably in professional and business services (+57,000, of which +25,600 were in temporary help services), bars and restaurants (+38,100), retail trade (+27,700), and education and health services (+26,000).  Construction added 7,000 jobs and has grown in 11 of the last 12 months, adding 189,000 jobs over that period. Government jobs fell by 3,000, with the Federal government (excluding postal) losing 9,400 jobs. Local government added 13,000 jobs, and with revisions has now expanded for three months in a row, a welcome sign that the unprecedented job losses in the local government sector may be nearing an end. 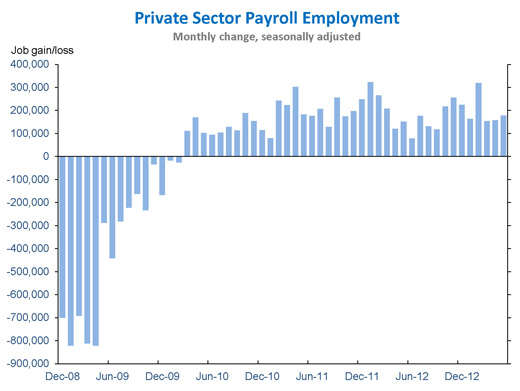 Alan B. Krueger is Chairman of the Council of Economic Advisers