Ansel Adams and My Dad: No Picture Taken 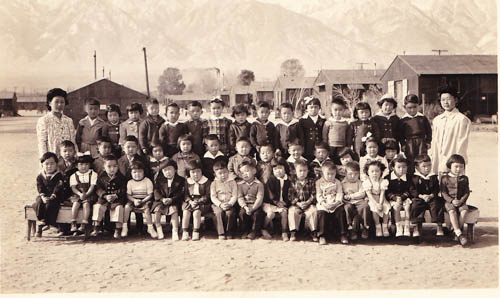 Ms. Francis’ pre-school class at the Manzanar War Relocation Center in Manzanar, California in 1942. Ms. Francis is in the front row. (by Personal Francis Family Photo)

Years ago, I showed my father a book of photos taken by Ansel Adams, the well-known naturalist photographer. These photos were taken by Adams during World War II, when he was working for the federal government. His job was to take pictures for the U.S. government to show the outside world that the 125,000 Japanese and Japanese American individuals and families placed in internment camps throughout the country by the U.S. government were being treated decently. When I showed the book to my father, he recalled the time that he himself met Ansel Adams in Manzanar, California, the camp that I knew as home for three years.

In the early days of Manzanar, there was little meat available for the roughly 10,000 camp internees, so a group asked the Administration if they could build a facility from spare wood to raise pigs. As my father struggled to build such a facility in the broiling sun and dusty desert surrounded by barbed wire on three sides and the Sierra Nevada range on the fourth side, a young man with a camera approached him and asked permission to take a photo of my father hard at work. My father was surprised by the sight of a camera (since they were forbidden when he first arrived in Manzanar) and also by the young man’s courtesy in asking permission before taking a photo. He inquired about his name and why he would want his picture taken in these difficult circumstances. The young man said his name was Ansel Adams, and that my father should want his picture taken, as it would last for posterity.

My father considered the request and told Adams that he did not want to be remembered by future generations and in the history books as an imprisoned man in the middle of the desert, working in these conditions so his wife, children, and other inmates could have a bit more to eat. He said that Adams absorbed the message, thanked him, and respected my father’s perspective. No photo of my father was taken by Ansel Adams.

I enjoy sharing my father’s story as an important part of my family’s history. In spite of the forced relocation and internment, the loss of his business, and the uncertainty of his future, my father refused to lock those dreadful circumstances into permanence – even if it were only a picture to be taken by an unknown, young government photographer named Ansel Adams. My father’s response reflected the attitude of so many immigrants I knew in my community as well as new immigrants to this country: a firm conviction that tomorrow will be a better day, even when the reality was that life in the United States could be almost unbearably difficult simply because they looked so different from others.

At a time when the country did not see him as the citizen he was, my father maintained his dignity and his love of country. Similar to the millions of immigrants who make up the landscape of our great nation, my father proved his American spirit through acts of courage and persistence. This was a small act of courage, but it remains an important part of our family history, along with the memorable young man with the unusual name of Ansel Adams. No photo remains, but this story is the legacy my father left for me, my brother, and our entire family.

Frances E. Francis is a member of the President’s Advisory Commission on Asian Americans and Pacific Islanders. Ms. Francis is currently an attorney and Of Counsel with Spiegel & McDiarmid LLP, a Washington DC law firm.