Supreme Court Strikes Down the Defense of Marriage Act

Today, the Supreme Court struck down Section 3 of the Defense of Marriage Act. In a statement released shortly after the Court’s ruling was announced, President Obama applauded the decision.

This was discrimination enshrined in law. It treated loving, committed gay and lesbian couples as a separate and lesser class of people. The Supreme Court has righted that wrong, and our country is better off for it. We are a people who declared that we are all created equal – and the love we commit to one another must be equal as well.

This ruling is a victory for couples who have long fought for equal treatment under the law; for children whose parents’ marriages will now be recognized, rightly, as legitimate; for families that, at long last, will get the respect and protection they deserve; and for friends and supporters who have wanted nothing more than to see their loved ones treated fairly and have worked hard to persuade their nation to change for the better.

So we welcome today’s decision, and I’ve directed the Attorney General to work with other members of my Cabinet to review all relevant federal statutes to ensure this decision, including its implications for Federal benefits and obligations, is implemented swiftly and smoothly.

On an issue as sensitive as this, knowing that Americans hold a wide range of views based on deeply held beliefs, maintaining our nation’s commitment to religious freedom is also vital. How religious institutions define and consecrate marriage has always been up to those institutions. Nothing about this decision – which applies only to civil marriages – changes that.

The laws of our land are catching up to the fundamental truth that millions of Americans hold in our hearts: when all Americans are treated as equal, no matter who they are or whom they love, we are all more free.

Aboard Air Force One en route to Africa, the President called Edie Windsor, the plaintiff in the court case against the Defense of Marriage Act. President Obama congratulated Windsor on the victory, and told her he was heartened by the decision so that loving, committed couples could enjoy full equality under the law. 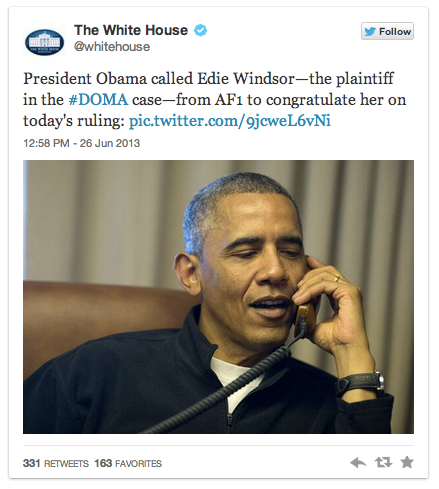