June 29, 2013 at 2:05 PM ET by First Lady Michelle Obama
Twitter Facebook Email
Summary:
We brought together students here in South Africa with students across the U.S. for a lively town hall about the importance of education.

Today, through the wonders of technology, we brought together students here in South Africa with students across the U.S. who joined us through a Google+ Hangout for a lively town hall about the importance of education.  Singer and songwriter John Legend – who’s passionate about improving education – joined us from Los Angeles.  And singer and actress, Victoria Justice – who works with an organization called Girl Up that empowers girls around the world – beamed in from Houston. 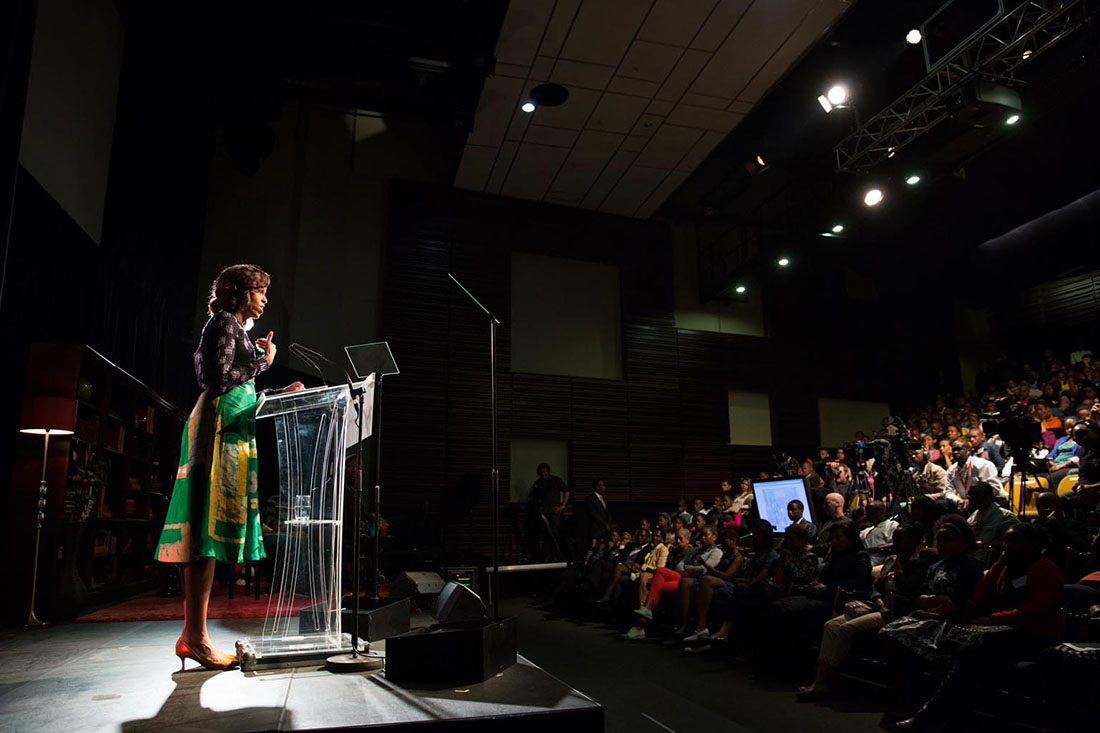 I kicked off this event by talking about how, in both the U.S. and South Africa, young people have always played such a vital role in shaping our history.  I then gave two examples – the Soweto Uprising here in South Africa, and the plight of the Little Rock Nine here in the U.S. – to illustrate that point.  In both cases, young people risked their lives to get a better education for themselves and for kids all across our two countries.  I also talked about President Mandela and how, if he could endure being confined to a tiny prison cell for nearly three decades, but still hold tight to his vision for his country’s future, then surely, we can all work hard to make the most of the opportunities he fought for.

After I spoke, I turned things over to our moderator, South African MTV  Base VJ Sizwe Dholomo, who opened up the floor to the students – and let me tell you, they blew me away!  We heard from students in South Africa including:

We also heard from kids in the U.S., including kids at the YMCA in New York City who travel around the world as part of a Global Teen Program; girls in Houston who are part of Girl Up; and kids in Kansas City and Los Angeles as well.

These young people are amazing! With their commitment to education, I know they'll change the world. -mo pic.twitter.com/mTWtBQMJyJ

These young people live halfway around the world from each other, but over the course of our conversation, it was clear that they all have so much in common: their commitment to getting a good education; their passion for serving their communities; their desire to step up and play a part in shaping history just like generations of young people before them.

That is the power of technology: to make the distance of an ocean disappear with the touch of a button, connecting us across continents so that we can listen to each other, learn from each other, and see how much we all have in common.  That is so important, because I want young people like you to think of yourselves as citizens of the world.  So I hope you’ll use technologies like Google+ Hangouts, Twitter, Instagram, Facebook and others to continue this conversation and keep on learning from – and being inspired by – kids all across the globe.