July 5, 2013 at 9:30 AM ET by Alan Krueger, Alan B. Krueger
Twitter Facebook Email
Summary:
Today’s report from the Bureau of Labor Statistics indicates that private sector businesses added 202,000 jobs last month and total non-farm payroll employment rose by 195,000 jobs in June. The economy has now added private sector jobs for 40 consecutive months, and a total of 7.2 million jobs has been added over that period.

Today’s report from the Bureau of Labor Statistics (BLS) indicates that private sector businesses added 202,000 jobs last month (see first chart below). Total non-farm payroll employment rose by 195,000 jobs in June. The economy has now added private sector jobs for 40 consecutive months, and a total of 7.2 million jobs has been added over that period. In spite of monthly volatility, over the past three years the pace of job growth has increased each year (see second chart below). So far this year, 1.23 million private sector jobs have been added.

The household survey showed that the unemployment rate remained at 7.6 percent in June down from 8.2 percent a year ago. The labor force participation rate rose by 0.1 percentage point for the second month in a row to 63.5 percent in June.

In the four years since the recession ended in June 2009, the economy has added 5.3 million jobs, thanks to the resilience of the American people and policies like the Recovery Act, which helped bring the recession to an end and put us on the path to recovery. With the recovery gaining traction, now is not the time for Washington to impose self-inflicted wounds on the economy. The President will continue to press Congress to act on the proposals he called for in his State of the Union address to make America a magnet for good jobs, help workers obtain the skills they need for those jobs, and make sure that honest work leads to a decent living. 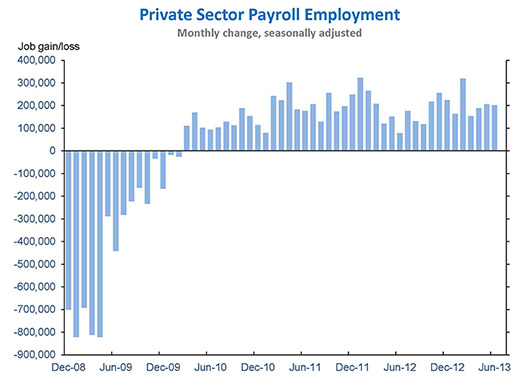 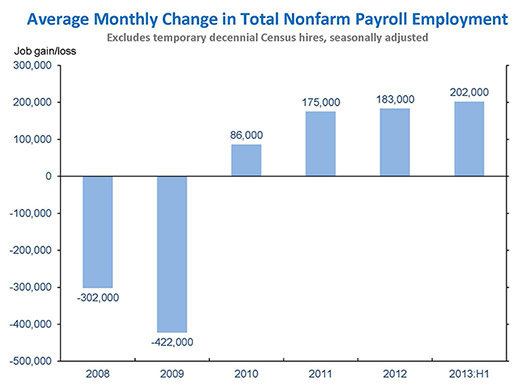