The Economic Benefits of Fixing Our Broken Immigration System

July 10, 2013 at 1:20 PM ET by Cecilia Muñoz, Gene Sperling, Alan Krueger, Sylvia Mathews Burwell
Twitter Facebook Email
Summary:
A new report highlights the extensive economic benefits of comprehensive immigration reform – and the significant costs to our country and our economy of failing to act at this critical time. 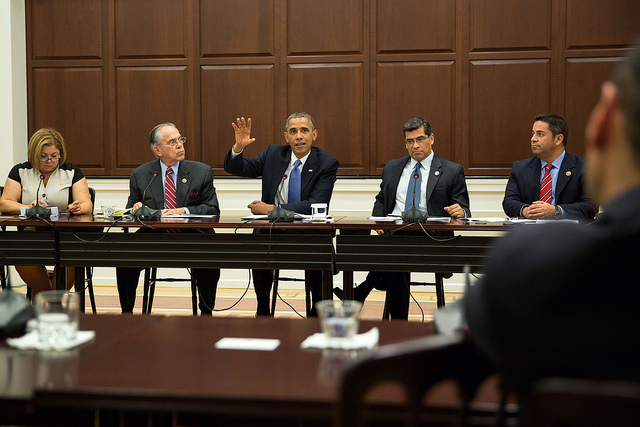 America has always been a nation of immigrants, and throughout the nation’s history, immigrants from around the globe have kept our workforce vibrant, our businesses on the cutting edge, and helped to build the greatest economic engine in the world. However, America’s immigration system is broken and has not kept pace with changing times. Today, too many employers game the system by hiring undocumented workers and there are 11 million people living and working in the shadow economy. Neither is good for the economy or the country.

The Senate’s Border Security, Economic Opportunity and Immigration Modernization Act (S. 744) represents the best chance that our country has had in years to modernize our immigration system. The President urges the House of Representatives to take action and move this bill or similar legislation forward, and stands willing to work with all parties to make sure that commonsense immigration reform becomes a reality as soon as possible.

During a meeting with the Congressional Hispanic Caucus this morning, the President released a White House report highlighting the extensive economic benefits of comprehensive immigration reform – and the significant costs to our country and our economy of failing to act at this critical time.

Economists, business leaders, and American workers agree – we must take advantage of this historic opportunity to fix our broken immigration system.  At stake is a stronger, more dynamic, and faster growing economy that will foster job creation, higher productivity and wages, and entrepreneurship. 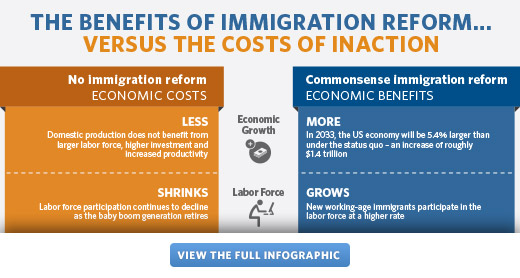 Commonsense immigration reform fosters innovation and encourages more job creation and job growth in the U.S. The bipartisan Senate bill makes meaningful improvements to the existing employment-based green card system and strengthens the United States’ ability to attract and retain highly-skilled talent from around the world. Recent studies have shown that immigrants promote productivity and innovation, both directly and indirectly through positive spillover effects on American workers.

Commonsense immigration reform would reduce the federal deficit, balance out an aging population, and strengthen Social Security.  According to CBO, the additional taxes paid by new and legalizing immigrants would much more than offset the estimated costs of the bill-- enacting the bill would actually improve the federal budget outlook in both the short- and long-term.  Additional immigration would help balance out an increase in retirees-per-worker as the baby boom generation retires, providing essential financial support for U.S. social insurance programs.

Comprehensive immigration reform will contribute to our housing market recovery and strengthen the technology, agriculture, and tourism industries, among others. In addition to the benefits described above – increasing total economic growth, boosting worker productivity, increasing innovation, and strengthening our fiscal health – the bipartisan Senate bill would bring specific benefits to a range of economic sectors.