The Game of Change Comes to the White House

Today, President Obama met with members of the 1963 Loyola University Chicago Ramblers championship team, and celebrated the 50th anniversary of their Division I basketball title. 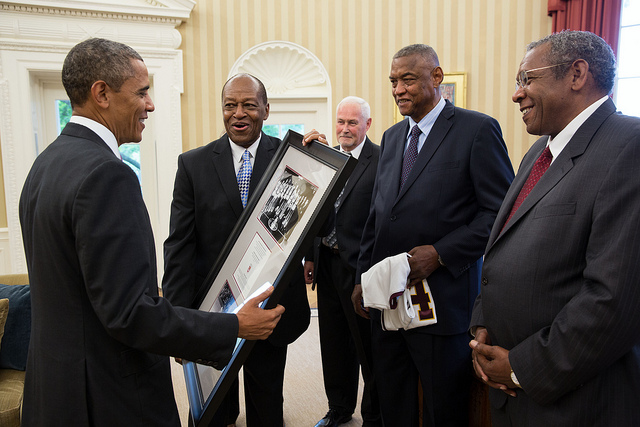 On March 15, 1963, the Ramblers played Mississippi State in a regional semifinal game known as the Game of Change.

The year: 1963, right in the midst of the Civil Rights movement. The team: The Loyola Ramblers, coached by George Ireland. The controversy: The Ramblers started four African-American players on the “Iron Five” lineup, even though the unwritten rules of college basketball allowed only two African-American players to start, and an unwritten law in Mississippi wouldn’t allow play against integrated teams.

Earlier in the year, the Ramblers had won 20 consecutive games and earned a tournament berth. The Game of Change took place in East Lansing, Michigan. The all-white Mississippi State team snuck into Michigan in defiance of an injunction issued by the Governor of Mississippi that was intended to prohibit the game.

Judy Van Dyck, the daughter of the Head Coach, George Ireland, accompanied the team today. She told me that she remembered her father saying, with tears in his eyes, that the time had come for change, that these were his kids, and he wanted to make a difference so that no other kids would have to go through what they went through.

And that’s just what happened.

The Ramblers went on to eventually win the 1963 NCAA Championship, by beating the Cincinnati Bearcats in overtime, 60-58, denying the Bearcats their third consecutive national title.

All nine players from the 1963 Ramblers graduated from Loyola, and many went on to excel in graduate studies. And this November, the Ramblers will become the first team to be inducted into the National Collegiate Basketball Hall of Fame.

Their induction coincides with several major 50th year anniversaries of the Civil Rights movement—from the murder of Medgar Evers, to the bombing of the 16th Street Baptist Church, to the Children’s March, to the Stand in the Schoolhouse Door in Alabama, to the March on Washington and Reverend Martin Luther King Jr.’s “I Have a Dream” speech.

The Ramblers broke barriers by refusing to give in to prejudice, and simply playing their best. As I watched President Obama speak with the players in the Oval Office, I thought of just how far we’ve come.

In 1963, a governor refused to let them play. But today, a President welcomed them to the White House with open arms.