America's Commitment to Volunteerism and Service 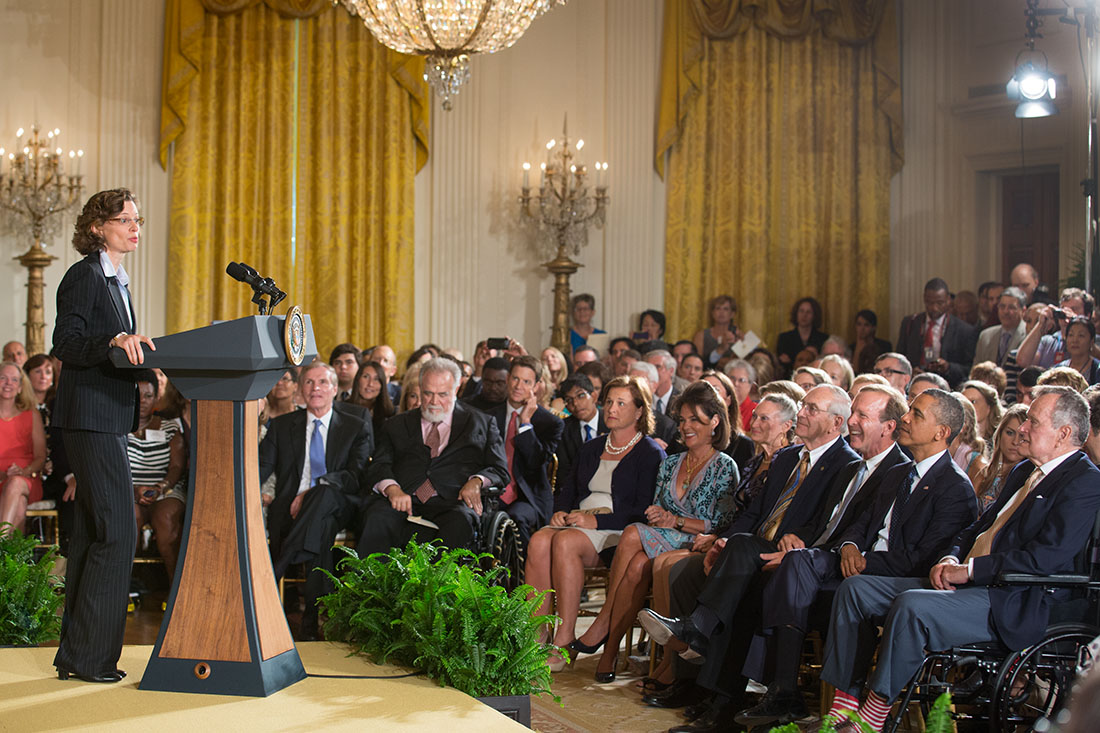 Michelle Nunn, the CEO of Points of Light, delivers remarks during an event to honor Outreach Inc. co-founders Floyd Hammer and Kathy Hamilton, winners of the 5,000th Daily Point of Light Award, in the East Room of the White House, July 15, 2013. (Official White House Photo by Chuck Kennedy)

The first immigrants to America came seeking freedom, but they survived -- and, in time, came to thrive -- because of their determination and because of each other. They valued self-reliance, but in times of strife they also knew could rely on neighbors, friends, sometimes even strangers to offer a helping hand.

That neighbor-helping-neighbor spirit is woven into the DNA of the American spirit. It defines in a very real sense who we are as a people.

It also unites us.

That unity was on vivid display this Monday when President Obama welcomed the man who launched the modern service movement, President George H. W. Bush, back to the White House to honor the recipients of the 5,000th Daily Point of Light award. Together, they lauded Kathy Hamilton and Floyd Hammer of Union, Iowa for stepping up to fight hunger and improve the lives of children worldwide.

Nearly 10 years ago, Hamilton and Hammer participated in a volunteer mission to Tanzania to help renovate an HIV/AIDS hospital there. Startled by the starvation they saw, the couple started Outreach, Inc., which has engaged thousands of volunteers in packaging and distributing 230 million free meals to children in more than 15 countries, including the United States.

Their story is a simple one: Two people decided that they simply had to do something. Telling that story, day in and day out, is what the Daily Point of Light Award is all about.

President Bush was the first president in U.S. history to institute a daily presidential recognition program from the White House, conferring 1,020 Daily Point of Light Awards between 1990 and 1993. And President Bush helped launch a nonprofit – Points of Light – that has become the largest organization in the world dedicated to volunteer service.

While he didn't originate the notion of helping our fellow man, he reasserted it as a national priority and insisted that "there can be no definition of a successful life that does not include service to others."

President Obama built on this commitment to service when he signed the Edward M. Kennedy Serve America Act in 2009, which will increase the size of AmeriCorps from 75,000 volunteers to 250,000 by 2017. In 2012, the President created the FEMA Corps program, which established a FEMA-dedicated unit of AmeriCorps members to work solely on disaster preparedness, response and recovery efforts -- and he launched the Serve.gov platform to make it easier for Americans to find and post local volunteer opportunities.

On Monday, the White House also announced plans to establish an interagency task force led by the Corporation for National and Community Service to develop strategies to expand national service to meet national needs through collaboration with other Federal agencies.

This historic event, then, brought together two Presidents and families united in their commitment to expand volunteerism and service – an issue with a long history of strong bipartisan support. While other critical issues can be attended by sharper debate, that bipartisan support for service is durable and enduring.

Today, America faces both challenges and opportunities in forming "a more perfect Union," but that same spirit of selflessness which has sustained us from our earliest days is as strong as ever.

As Kathy Hamilton and Floyd Hammer show in such a wonderful and compassionate way, you don't have to be a President to be a leader -- and you don't have to be a First Lady to make a difference in the life of your fellowman. All you have to do is open your heart to the need around you, and then do something about it.

Valerie Jarrett is a Senior Advisor and Assistant to the President for Intergovernmental Affairs and Public Engagement. Neil Bush is the Chairman of Points of Light. Michelle Nunn is the CEO of Points of Light