July 16, 2013 at 9:00 AM ET by Nick Sinai and Ryan Panchadsaram
Twitter Facebook Email
Summary:
Today, we’re excited to share a sneak preview of a new design for Data.gov, called Next.Data.gov. The upgrade builds on the President’s May 2013 Open Data Executive Order that aims to fuse open-data practices into the Federal Government’s DNA. Next.Data.gov is far from complete (think of it as a very early beta), but we couldn’t wait to share our design approach – knowing that we need your help to make it even better.

Last week, President Obama talked about the importance of opening government data to the American people, so entrepreneurs and business owners can use those troves of information to create jobs and solve problems that government can’t solve by itself. In remarks last Monday, he noted many examples of the Administration’s progress toward making that happen, saying:

“At Data.gov, you can search through and download more than 75,000 data sets – data on everything from what different hospitals charge for different procedures, to credit card complaints, to weather and climate measurements.”

Today, we’re excited to share a sneak preview of a new design for Data.gov, called Next.Data.gov. The upgrade builds on the President’s May 2013 Open Data Executive Order that aims to fuse open-data practices into the Federal Government’s DNA. Next.Data.gov is far from complete (think of it as a very early beta), but we couldn’t wait to share our design approach and the technical details behind it – knowing that we need your help to make it even better.  Here are some key features of the new design: 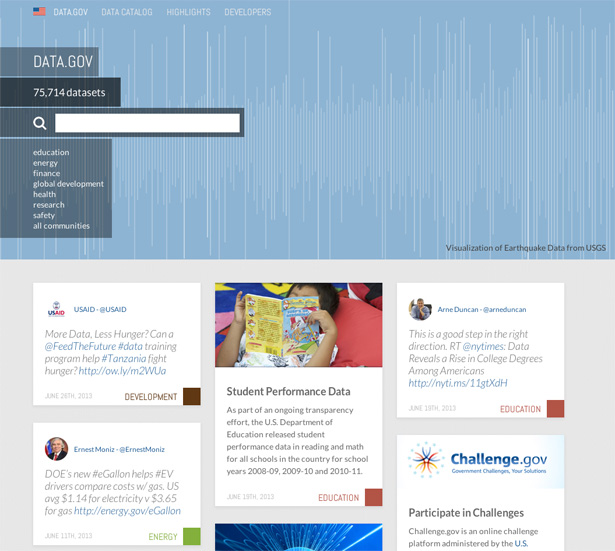 Leading with Data: The Data.gov team at General Services Administration (GSA), a handful of Presidential Innovation Fellows, and OSTP staff designed Next.Data.Gov to put data first. The team studied the usage patterns on Data.gov and found that visitors were hungry for examples of how data are used. The team also noticed many sources, such as tweets and articles outside of Data.gov featuring Federal datasets in action. So Next.Data.gov includes a rich stream that enables each data community to communicate how its datasets are impacting companies and the public.

In this dynamic stream, you’ll find blog posts, tweets, quotes, and other features that more fully showcase the wide range of information assets that exist within the vaults of government.

Powerful Search: The backend of Next.Data.gov is CKAN and is powered by Solr—a powerful search engine that will make it even easier to find relevant datasets online. Suggested search terms have been added to help users find (and type) things faster. Next.Data.gov will start to index datasets from agencies that publish their catalogs publicly, in line with the President’s Open Data Executive Order. The early preview launching today features datasets from the Department of Health and Human Services—one of the first Federal agencies to publish a machine-readable version of its data catalog.

Rotating Data Visualizations: Building on the theme of leading with data, even the  masthead-design for Next.Data.gov is an open-data-powered visualization—for now, it’s a cool U.S. Geological Survey earthquake plot showing the magnitude of earthquake measurements collected over the past week, around the globe.

This particular visualization was built using D3.js. The visualization will be updated periodically to spotlight different ways open data is used and illustrated. 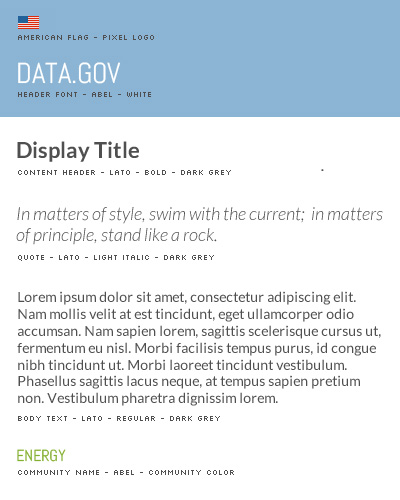 The font for Data.gov and community headings is Abel, a modern interpretation of a flat-sided sans serif. Historically used for newspaper headlines and posters, Abel works great for the headers in the new Data.gov. Lato, the font used for content on Data.gov, is a semi-rounded sans serif that works well for body text. The font is balanced, fresh and welcoming.

Responsive Design: Pull up Next.Data.Gov on your smartphone or tablet and you will see the core content sections adapt to your screen size.

Scalable and Open Source: Next.Data.Gov was built using new tools. This project tapped into two very active open source projects: WordPress and CKAN. The content and community sections of Next.Data.Gov are powered by WordPress. The data catalog is powered by CKAN.

Building Next.Data.Gov Together: The Next.Data.gov interface launching today is an early peek at the future Data.gov experience. Because many of you depend on Data.gov for critical functions, Data.gov will be maintained in its current form and will remain fully accessible while the Data.gov team continues to iterate and improve upon Next.Data.Gov. Going forward, expect regular design and software updates.

We encourage you to collaborate in the design process by creating pull requests or providing feedback via Quora or Twitter.

Nick Sinai is U.S. Deputy CTO and Ryan Panchadsaram is Senior Advisor to the U.S. CTO