President Obama Lays Out a Better Bargain for the Middle Class

July 24, 2013 at 5:31 PM ET by Megan Slack
Twitter Facebook Email
Summary:
President Obama kicks off a series of speeches about his vision for rebuilding an economy that puts the middle class -- and those fighting to join it – front and center.

Today President Obama returned to Knox College in Illinois to kick off a series of speeches about his vision for rebuilding an economy that puts the middle class -- and those fighting to join it – front and center.

In his remarks, President Obama laid out the progress we’ve made together in the five years since the start of the recession that cost millions of Americans their jobs, their homes, and their savings

Thanks to the grit and resilience and determination of the American people -- of folks like you -- we’ve been able to clear away the rubble from the financial crisis. We started to lay a new foundation for stronger, more durable economic growth.

As a country, we’ve recovered faster and gone further than most other advanced nations in the world. With new American revolutions in energy and technology and manufacturing and health care, we're actually poised to reverse the forces that battered the middle class for so long, and start building an economy where everyone who works hard can get ahead. 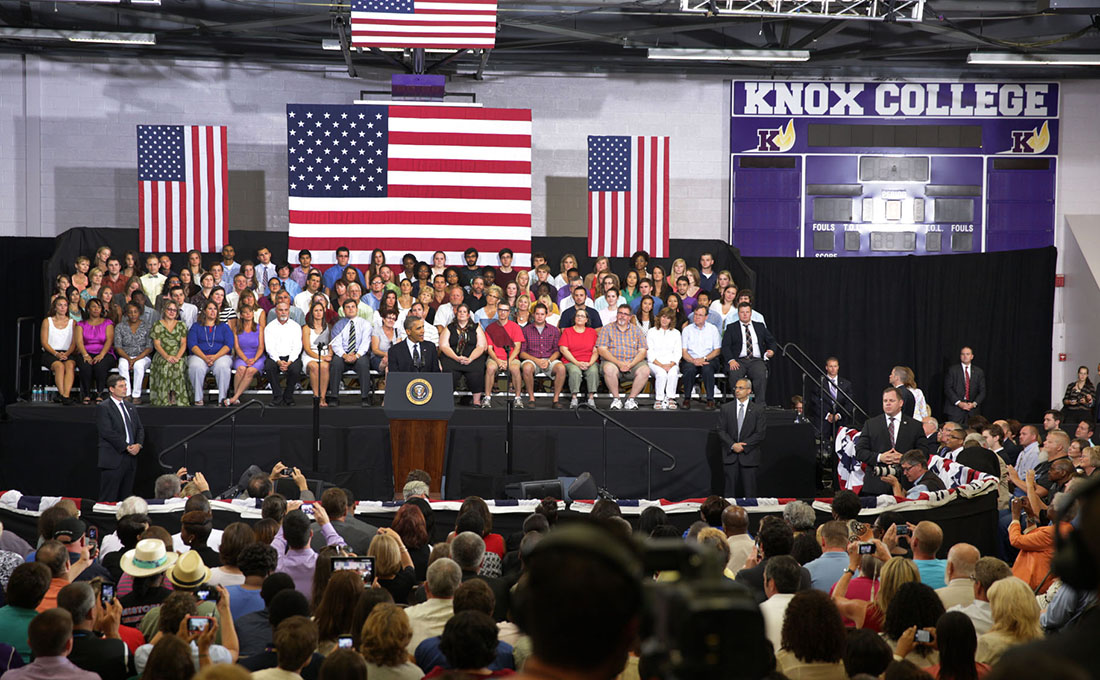 But, he said, “I’m here to tell you today that we're not there yet.”

“As Washington prepares to enter another budget debate, the stakes for our middle class and everybody who is fighting to get into the middle class could not be higher,” he said.

“And that’s why, over the next several weeks, in towns across this country, I will be engaging the American people in this debate.”

I'll lay out my ideas for how we build on the cornerstones of what it means to be middle class in America, and what it takes to work your way into the middle class in America: Job security, with good wages and durable industries. A good education. A home to call your own. Affordable health care when you get sick. A secure retirement even if you’re not rich. Reducing poverty. Reducing inequality. Growing opportunity. That’s what we need.

A better bargain for the middle class -- an economy that grows from the middle out, not the top down, the President explained. “That's where I will focus my energies not just for the next few months, but for the remainder of my presidency.”

Following his speech in Illinois, President Obama traveled to University of Central Missouri to continue making his case, highlighting the importance of preparing our students and workers for the global economy of the 21st century. "If we don’t invest in American education, then we’re going to put our kids, our workers, our countries, our businesses at a competitive disadvantage," he said.

"So what do we need to do on education? Number one, it’s got to start in the earliest years. And that means working with states to make high-quality preschool available for every four-year-old in America," the President explained. " We’ve got to rethink our high schools so that our kids graduate with the real-world skills that this new age demands. We’ve got to reward the schools that forge partnerships with local colleges and businesses, and that focus on the fields of the future like science and technology and math and engineering."

The University of Central Missouri is a perfect example of this type of partnership, President Obama said.

What's happened at UCM is you've partnered with the Lee’s Summit School District, with the Metropolitan Community College, with local health care, engineering, energy, and infrastructure firms -- all industries that are going to drive job growth in the future -- and everybody is now working together to equip students with better skills, allow them to graduate faster with less debt, and with the certainty of being able to get a job at the other end. That's a recipe for success over the long term.