July 24, 2013 at 4:47 PM ET by Katie Dowd and Karrie Pitzer
Twitter Facebook Email
Summary:
Today, at a private meeting in the West Wing of the White House, US Chief Technology Officer Todd Park, Deputy US Chief Technology Officer Jen Pahlka, and other senior Obama Administration officials specializing in science, technology, engineering, and math (STEM), met with five inspiring young women to discuss academic and career pathways in STEM—and barriers to the involvement of girls in those fields. 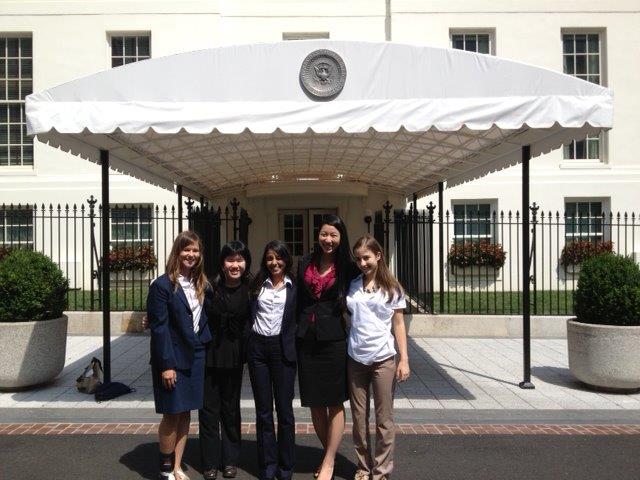 Today, at a private meeting in the West Wing of the White House, US Chief Technology Officer Todd Park, Deputy US Chief Technology Officer Jen Pahlka, and other senior Obama Administration officials specializing in science, technology, engineering, and math (STEM), met with five inspiring young women to discuss academic and career pathways in STEM—and barriers to the involvement of girls in those fields. The students were past winners and current finalists of the annual Google Science Fair—an online science competition open to high-school-aged students that solicits “ideas that will change the world.”

Since the earliest days of his Administration, President Obama has made it a top priority to provide students with the skills they need to excel in the well-paying and highly rewarding STEM fields, with a particular focus on women and girls. He understands that increasing the number of women engaged in STEM is essential to our Nation’s ability to out-build, out-educate, and out-innovate future competitors.

The young participants in today’s meeting embody that potential. At the meeting, the students each described their breakthrough science projects, their career aspirations, and shared their views on what barriers could be overcome to help further increase the participation of girls in STEM studies.

Floridian Brittany Wenger, Grand Prize winner of the 2012 Google Science Fair, talked about her groundbreaking “Global Neural Network Cloud Service for Breast Cancer,” which supports a data-driven platform for breast cancer diagnosis based on information from minimally-invasive biopsies, as opposed to traditional and more painful surgical biopsies. The platform has thus far proven to be remarkably accurate and is now being pilot tested for use in diagnosing leukemia and other cancers. Brittany conducted most of the research for her project—including running more than 7 million trials of her computer program—from her bedroom at home.

Valerie Ding, a high school junior from Oregon, is passionate about renewable energy and is a current finalist in this year’s Google Science Fair. For her research project, Valerie created new algorithms to dramatically increase the efficiency of high-tech "quantum dot (QD)" solar cells -- nearly doubling their efficiency and showing tremendous promise for the future of harnessing renewable energy from the sun. While still unsure what she'll be studying once in college, Valerie said she is sure there is a lot that can be done to make solar cells more efficient than they are today, and she fully intends to pitch in to make that happen.

After experiencing the impact of respiratory illness in her own family, Oregonian Naomi Shah launched a project to explore the effects of indoor air quality on lung health. She performed breath tests on more than 100 volunteers and measured air quality inside the subjects’ homes and workplaces. Based on that information, she developed a mathematical algorithm that can predict lung health based on certain indoor air quality parameters. In her own community, she founded a computer science camp for middle school girls called FACT (Females Advancing Computing and Technology) – to help get more young women involved in STEM. Naomi was the 2011 Google Science Fair winner in the 14-15 year old bracket.

Current Google Science Fair finalist Lizzie Zhao, from Oregon, has called science “real-world magic.” She developed an algorithm for diagnosing melanoma with 80% accuracy, based on uploaded images of moles and other skin lesions. Lizzie explained that her research was based on common knowledge in medicine that melanoma can almost always be treated if caught in its earliest stages. Her project promotes earlier diagnosis by allowing people to get initially diagnosed from the comfort of their own homes.

Lauren Hodge, from Pennsylvania, took on a project that hits close to home—and kitchens—for many Americans. After reading about a lawsuit and learning that the charring on grilled chicken can contain dangerous carcinogens, Lauren examined the effect of five different common marinade ingredients on the level of the potentially harmful chemicals in the resulting meal. Her research showed that using more acidic marinades—like lemon juice—when grilling chicken reduced the formation of carcinogens by up to 97%. Lauren is a 2011 Google Science Fair winner in the 13-14 year old bracket and is headed to college this fall, at the age of 16.

In more than thirty minutes of open discussion between the students and Administration officials about opportunities and barriers for girls pursuing STEM, key emerging themes included the importance of local research mentors, robust STEM-peer networks, and better access to laboratory facilities, lab equipment, scientific literature, and open data. The students also pointed out that opportunities to present research alongside peers—from county-level science fairs to National-scale events like the White House Science Fair—are excellent platforms for building academic and career networks and helping to get more girls excited about STEM.

Increasing girls’ STEM participation; working hard to boost the percentage of scientists and engineers who are women; giving a greater voice to strong STEM role models; and continuing to support incredible young women like Brittany, Elizabeth, Naomi, Lauren, and Valerie is not just the right thing to do, but the smart thing to do for our Nation.

Learn more about what the Administration is doing to promote women in STEM.

Karrie Pitzer is Executive Assistant to the Director of OSTP