Global Investment is Important to the American Economy

July 25, 2013 at 11:30 AM ET by Secretary Penny Pritzker
Twitter Facebook Email
Summary:
Secretary of Commerce Penny Pritzker recounts her participation in the White House Forum on Global Investment, which highlighted the Obama Administration's support for foreign investment in the United States.

Ed Note: This is a cross post from the blog of commerce.gov. You can find the original post

Since I was confirmed as Secretary of Commerce, I’ve been meeting with business leaders, entrepreneurs, and foreign leaders to let them know that America is “open for business.” The United States is one of the most desirable places to do business; our $16 trillion economy, with its productive workforce and diverse consumer base, could not do what it does without domestic as well as foreign investment. Yesterday, I participated in the White House Forum (Forum) on Global Investment to highlight the administration’s support for, and benefits of, foreign direct investment (FDI) in the United States. 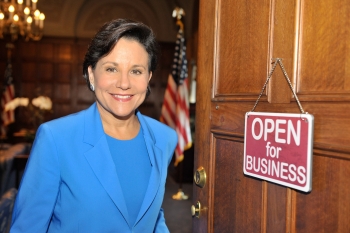 For the meeting, I was joined by Acting Deputy Secretary of Commerce Pat Gallagher, Under Secretary of Commerce for International Trade Francisco Sánchez, Assistant Secretary of State for Economic and Business Affairs Jose Fernandez, and 21 foreign ambassadors and representatives to highlight the United States’ whole-of-government approach to attracting foreign direct investment.

Part of our discussion focused on the growth of FDI in sectors such as manufacturing, machinery, and scientific and technical services. In fact, FDI in the United States totaled nearly $168 billion last year. And just recently, the consulting firm A.T. Kearney published its annual FDI Confidence Index, with the United States ranked #1 on this list for the first time since 2001.

Two years ago, the president launched SelectUSA within the Department of Commerce to support foreign companies’ efforts to invest, remain, expand, or return to the U.S. As part of this effort, we’re working to educate firms about working in the U.S. In addition, our Foreign Commercial and State Service officers around the world are not only helping U.S. companies export, but now; they’re also helping foreign companies invest in the U.S.

Creating jobs – whether for a U.S. company or a subsidiary of a foreign firm – is a win-win, which strengthens our commercial and economic ties. It’s with that in mind that the Commerce Department will host the first ever SelectUSA 2013 Investment Summit in Washington, D.C., from October 31 – November 1. The summit is an opportunity for domestic and international investors to learn all about why the United States is a great place to invest.

FDI not only helps create closer economic ties between nations, but it is an important part of the United States’ economic growth, and already supports 5.6 million American jobs.

At President Obama’s direction, the Commerce Department will continue to be the lead in coordinating all available U.S. government resources to help both foreign and domestic businesses find investment opportunities in the United States, the world’s largest and most dynamic economy.

Success means more jobs for American workers, and that is worth fighting for.