July 31, 2013 at 9:30 AM ET by Alan Krueger, Alan B. Krueger
Twitter Facebook Email
Summary:
The Bureau of Economic Analysis released a comprehensive revision to the National Income and Product Accounts showing that the recovery from the Great Recession has been slightly faster than previously reported, with real gross domestic product (GDP) expanding by a cumulative 8.5% from 2009:Q2 to 2013:Q1, compared to the previous estimate of 8.1% growth over that period.

This morning the Bureau of Economic Analysis released a comprehensive revision to the National Income and Product Accounts, covering the full history of data since 1929. The revision showed that the recovery from the Great Recession has been slightly faster than previously reported, with real gross domestic product (GDP) expanding by a cumulative 8.5% from 2009:Q2 to 2013:Q1, compared to the previous estimate of 8.1% growth over that period. Including the advance estimate for 2013:Q2, real GDP has risen by 9.0% since the business-cycle trough in 2009:Q2 (see chart). In addition, real GDP surpassed its pre-recession peak in 2011:Q2, two quarters sooner than was reported prior to the revision, and is 4.4% higher than it was at the business-cycle peak in 2007:Q4.

The revision also showed that while the contraction during the Great Recession was slightly less severe than previously reported, it remains the largest decline since quarterly data became available in 1947. Cumulatively, real GDP fell by 4.3% during the recession, less than the 4.7% drop previously reported. The steep drop in economic activity caused by the recession makes it imperative that more work is done to raise economic growth and speed job creation.

The comprehensive revision to the national accounts, which is the first since July 2009, includes additional source data received by the Bureau of Economic Analysis, as well as methodological changes designed to better reflect the evolving nature of the U.S. economy. For instance, the GDP data released today incorporates input-output tables derived from the once-every-five-years Economic Census, and adopts an expanded definition of business investment that includes spending on research and development (R&D) and the creation of original works of art like movies. All told, these and other changes raised the level of GDP in the first quarter of 2013 by $551 billion at an annual rate (or 3.4%), from $16.0 trillion to $16.5 trillion.

While the annual rate of real GDP growth over the 83 years since 1929 was revised up just 0.1 percentage point to 3.3%, a handful of recent quarters were subject to large revisions. For example, real GDP growth in 2011:Q1, which previously had been reported at 0.1% at an annual rate, was revised down to -1.3%. The earthquake and tsunami that occurred in Japan in March 2011 disrupted critical supply chains, likely subtracting from growth in that quarter. In contrast, real GDP growth in 2010:Q2 and 2012:Q1 were both revised up by 1.7 percentage points to annualized rates of 3.9% and 3.7%, respectively.

Since the beginning of 2009, the average absolute revision from the advance quarterly estimate of real GDP growth to the latest data was 1.3 percentage points. The magnitude of these changes highlights that real-time economic data can be highly volatile and subject to substantial revision. Therefore, it is important not to read too much into any one report, and it is informative to consider each report in the context of other data that are available.

The Bureau of Economic Analysis also reported today that real GDP increased 1.7 percent at an annual rate in the second quarter of 2013, according to the advance estimate. Among the various components of GDP, exports grew 5.4% at an annual rate, the fastest increase since 2011:Q3, and real residential investment posted its eleventh consecutive quarter of growth, the longest streak since 2002-2005. State and local government spending edged up slightly for the first time in a year, and just the second time since 2010.

Components subtracting from GDP growth in the second quarter included imports, which rose at their fastest rate since 2010:Q3, and federal government spending, which fell for the seventh time in the last eight quarters. Removing the influence of overall government spending, the private components of real GDP grew 2.2% at an annual rate.

The fact that declining federal spending continues to be a drag on economic growth is another reminder that now is not the time for Washington to impose self-inflicted wounds on the economy. The Administration continues to urge Congress to replace the sequester with balanced deficit reduction, and promote the investments our economy needs to put more Americans back to work, such as by rebuilding our roads and bridges. 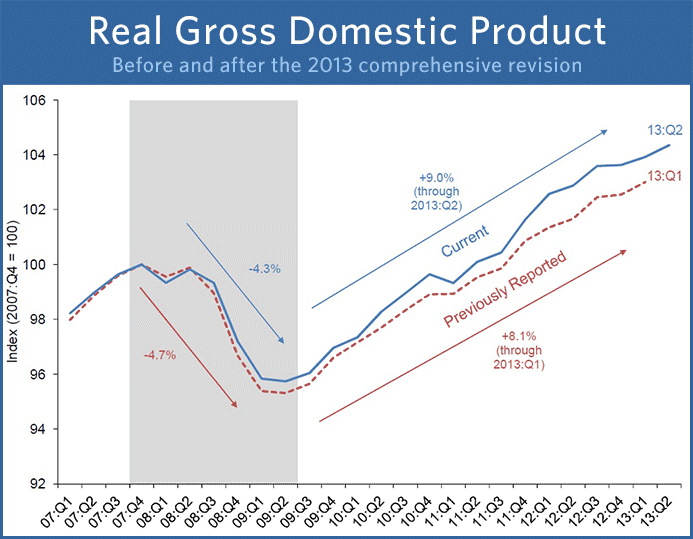