New Citizens and the American Dream

July 31, 2013 at 7:04 PM ET by Valerie Jarrett, Valerie B. Jarrett
Twitter Facebook Email
Summary:
Yesterday, I had the privilege of speaking at a naturalization ceremony for newly naturalized citizens of the United States of America.

Yesterday, I had the privilege of speaking at a naturalization ceremony for newly naturalized citizens of the United States of America.

There were over 700 representatives from 92 countries across 6 continents who became Americans. From the Philippines, to Germany, El Salvador, to Peru, to Australia, and every other corner of the globe, they embodied not just the face of the world, but the face of America. 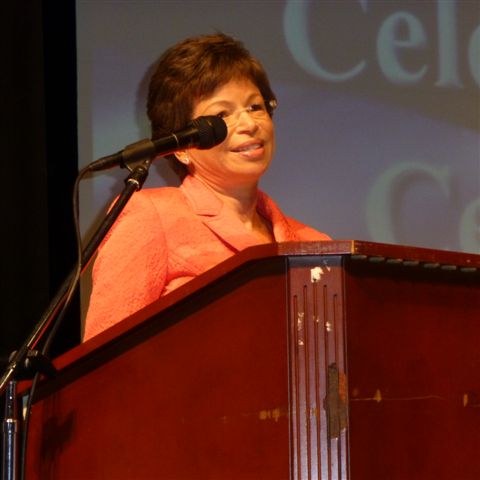 Valerie Jarrett speaks at a naturalization ceremony in Alexandria, Virginia, on July 30, 2013 (Photo by USCIS).

Their presence is a testament to the promise of the American Dream. It’s the dream that says no matter who you are, where you came from, what your last name is, what you believe, or who you love, if you come here, and work hard, if you believe in yourself, if you embrace the spirit of limitless possibilities, then in this great country, you can make it if you try.

All Americans have the same dream—receive a good education, have a job, the ability to afford a home, send their kids to college, health care so they don’t have worry about going broke if they get sick, or are in an accident, and the ability to retire with a little money in their pocket.

Our newest Americans came here in pursuit of that dream. And in so many ways, they are already woven into the fabric of our great country. They’ve gone to school here, worked here, been active in our communities, served, and defended our country through active military service, and made our nation stronger, safer, and better.

When the newest Americans stood tall, and faced our American flag, and pledged allegiance to the country they now official call home, my eyes swelled with tears, knowing that they were accepting both the privilege, and responsibility of citizenship in our great country. And they reminded me of how precious our citizenship is – of how much it is worth, why we should never take it for granted, and why it is worth protecting.

Simply put, they belong here. And they remind us again of the importance of fixing our immigration system, so that aspiring Americans can take the pathway that they have taken, and become full-fledged citizens.

That’s why President Obama has made immigration reform one of his top priorities this year. Last month, the Senate passed an historic piece of legislation in an overwhelming bipartisan vote.  Now it’s time for the House to take action.

Immigration reform is necessary because it speaks to our values as a country—a nation of laws, and a nation of immigrants. It’s the right thing to do because our system is broken.  And we also know that economic costs of inaction are simply too high to delay.

If the Senate bill were passed, our economy’s GDP would grow nearly five and a half percent more over the next two decades, resulting in massive job creation.

We would see real wages will rise, federal deficits will fall by $850 billion, and our debt will shrink as a share of the economy.

We would see a stronger housing recovery, thanks to stronger demand and higher prices for homes in neighborhoods hardest hit by the recession.

We would see foreign-born students educated in American universities stay in our country, and create jobs.

And according to a White House report released on Monday, if immigration reform passes, we’d have a more stable agriculture workforce that industry needs in order to remain competitive with other nations and maintain our abundant food supply. For millions of farmworkers who live in the shadows, the bill will provide an opportunity to earn citizenship by continuing to contribute to America's agriculture economy.

These are real impacts that would benefit everyone.  And this is our best chance in a long time to finally get this done. We owe it to our heritage, to our country’s future, and to the next generation, to fix our broken system, today. After all, America’s strength has always come from the rich diversity, and core decency of our people.