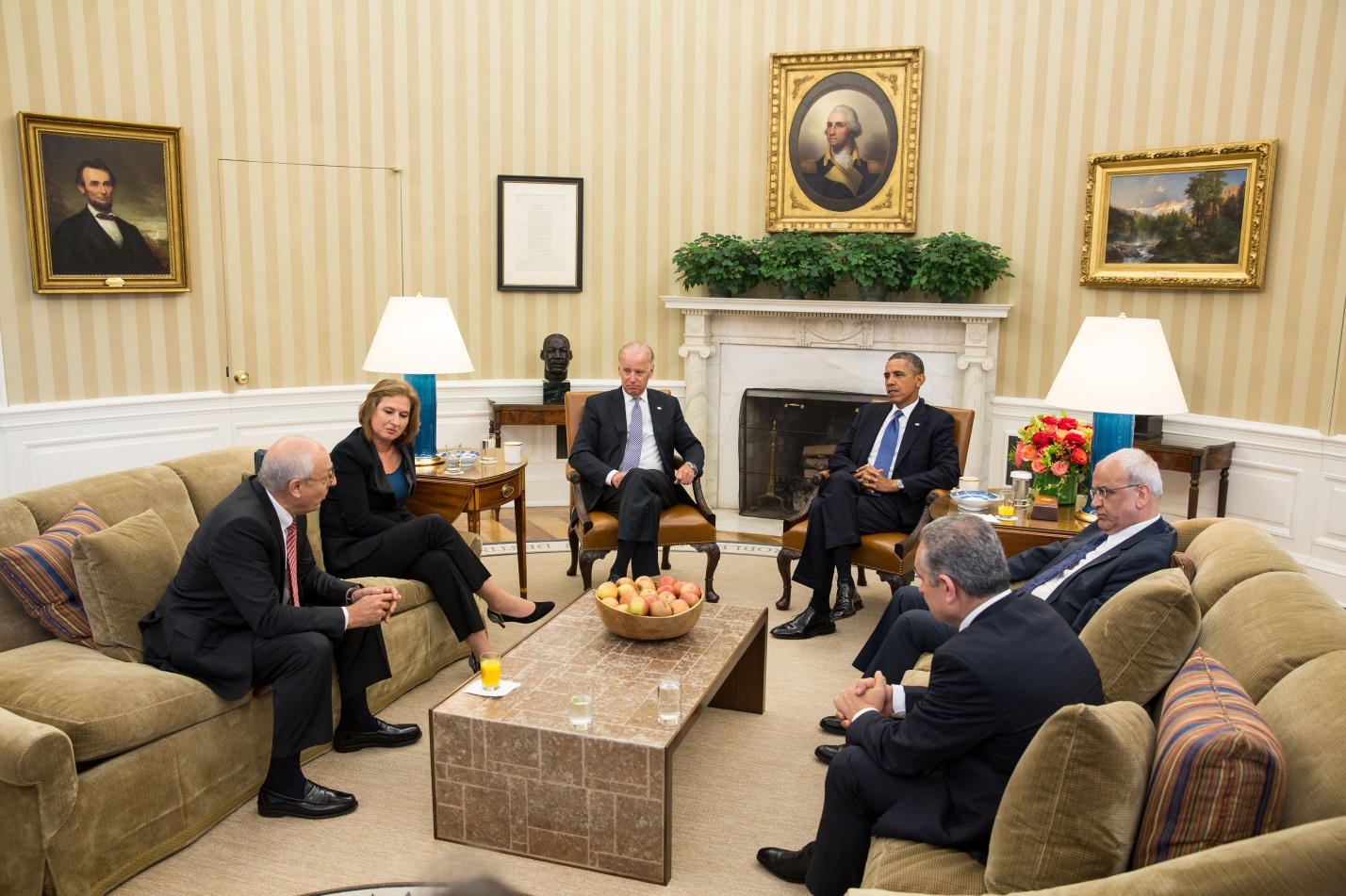 As the negotiations got underway on Monday, President Obama offered his support, noting:

“The most difficult work of these negotiations is ahead, and I am hopeful that both the Israelis and Palestinians will approach these talks in good faith and with sustained focus and determination. The United States stands ready to support them throughout these negotiations, with the goal of achieving two states, living side by side in peace and security.”

On Tuesday morning, President Obama and Vice President Biden met with the negotiators at the White House.  The President conveyed his appreciation to both sides for the leadership and courage they have shown in coming to the table, and to directly express his personal support for final status negotiations towards the goal of achieving two states living side by side in peace and security.

This resumption of talks began in Washington on Monday night with an Iftar dinner hosted for the negotiators by Secretary Kerry at the U.S. Department of State, and also attended by the newly appointed U.S. Special Envoy  for Israeli-Palestinian Negotiations, Ambassador Martin Indyk. 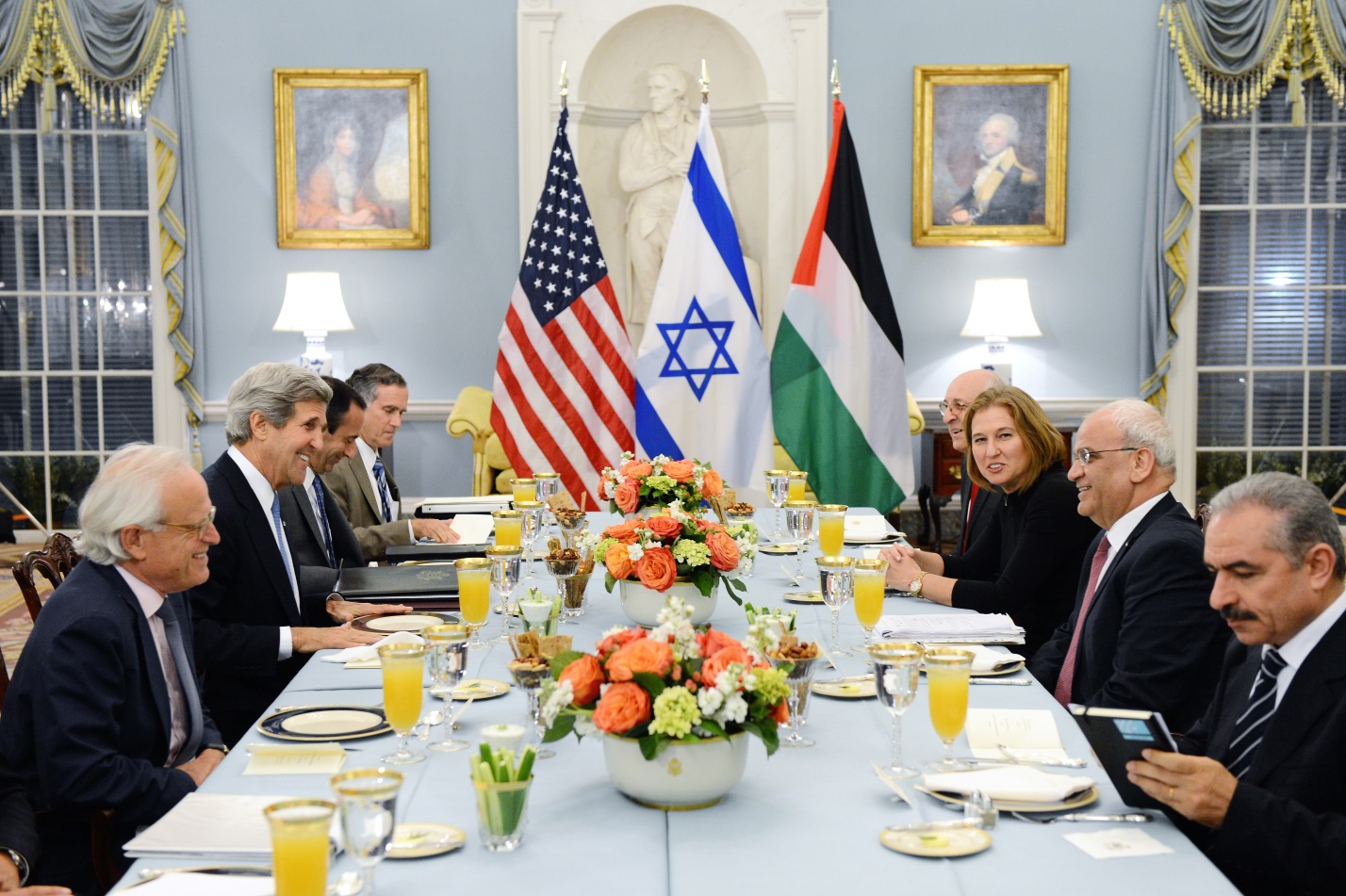 Negotiations continued on Tuesday and concluded with a press conference at which Secretary Kerry emphasized that the goal of the negotiations is to reach a final status agreement over the course of the next nine months. He also announced that the parties will meet again within the next two weeks either in Israel or the Palestinian Territories.

“I think everyone involved here believes that we cannot pass along to another generation the responsibility of ending a conflict that is in our power to resolve in our time,” said Secretary Kerry in his remarks on Tuesday. “So while I understand the skepticism, I don’t share it and I don’t think we have time for it. . . .  A viable two-state solution is the only way this conflict can end, and there is not much time to achieve it, and there is no other alternative.”

In his remarks, Kerry reiterated the U.S. commitment to Israel’s security:

“Our commitment to Israel’s security is why President Obama’s Administration has done more than any before it to strengthen our unshakeable bond and why General John Allen is on the ground working to ensure Israel’s security needs will be met. . . .”

He also underscored the benefits of peace, stating:  “We can also envision a day when Israelis actually can truly live in peace – not just the absence of conflict, but a full and a lasting peace with Arab and Muslim nations, an end once and for all to the pernicious attacks on Israel’s legitimacy. . . .  And we cannot forget that the security of Israel will also benefit Palestinians next door.”

In her remarks, Justice Minister Livni thanked President Obama for his dedication to the peace process, recalling his historic trip to Israel in March, which served to jump-start the process that led to this week’s meetings:

“I also want to thank President Obama for his personal commitment to peace and to Israel’s security.  The powerful impression left by the President’s last visit to Israel still remains in the hearts of the Israeli people,” said Minister Livni.

In his remarks, Chief Negotiator Erekat expressed his appreciation to the President and Secretary Kerry:

“I would like to extend our deepest appreciation to President Barack Obama and to you, Secretary Kerry, for your relentless efforts and unwavering commitment to achieve a just, comprehensive, lasting peace between Palestinians and Israelis.”

Matt Nosanchuk is an Associate Director of the White House Office of Public Engagement.