August 2, 2013 at 9:30 AM ET by Alan Krueger, Alan B. Krueger
Twitter Facebook Email
Summary:
Today’s report from the Bureau of Labor Statistics (BLS) indicates that the unemployment rate declined from 7.6 percent to 7.4 percent in July, reaching its lowest level since December 2008, and the establishment survey showed that private sector employers added 161,000 jobs last month.

With the recovery entering its fifth year, we need to build on the progress we have made so far and now is not the time for Washington to impose self-inflicted wounds.  The across-the-board budget cuts known as the sequester continue to be a drag on the economy now and in the future.  The Administration continues to urge Congress to replace the sequester with balanced deficit reduction, and promote the investments our economy needs to put more Americans back to work, such as by rebuilding our roads and bridges.

According to the establishment survey, in July employment increased notably in retail trade (+46,800), bars and restaurants (+38,400), professional and business services (+36,000), financial activities (+15,000). Construction lost 6,000 jobs due to declines in the nonresidential sector, but has grown in 11 of the last 14 months, adding 178,000 jobs in that period. Local governments added 6,000 jobs, and have now expanded for five months in a row, after losing 560,000 jobs in the previous 48 months.  Manufacturing employment rose by 6,000 jobs, with motor vehicles and parts adding 9,100 jobs.  Compared to last month when it gained 19,100 jobs, the amusements, gambling, and recreation industry lost 4,800 jobs. 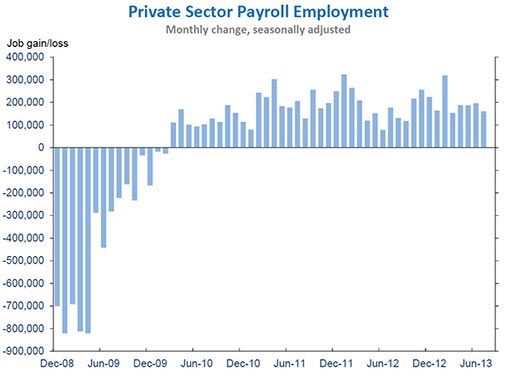