August 20, 2013 at 5:15 PM ET by Tyler Holden
Twitter Facebook Email
Summary:
On August 20, President Obama welcomed the 1973 Super Bowl Champion Miami Dolphins to the White House to celebrate their accomplishment. It did not become common practice for Super Bowl champions to visit the White House until after 1980, and President Obama was able to take advantage of past presidents’ missed opportunity. 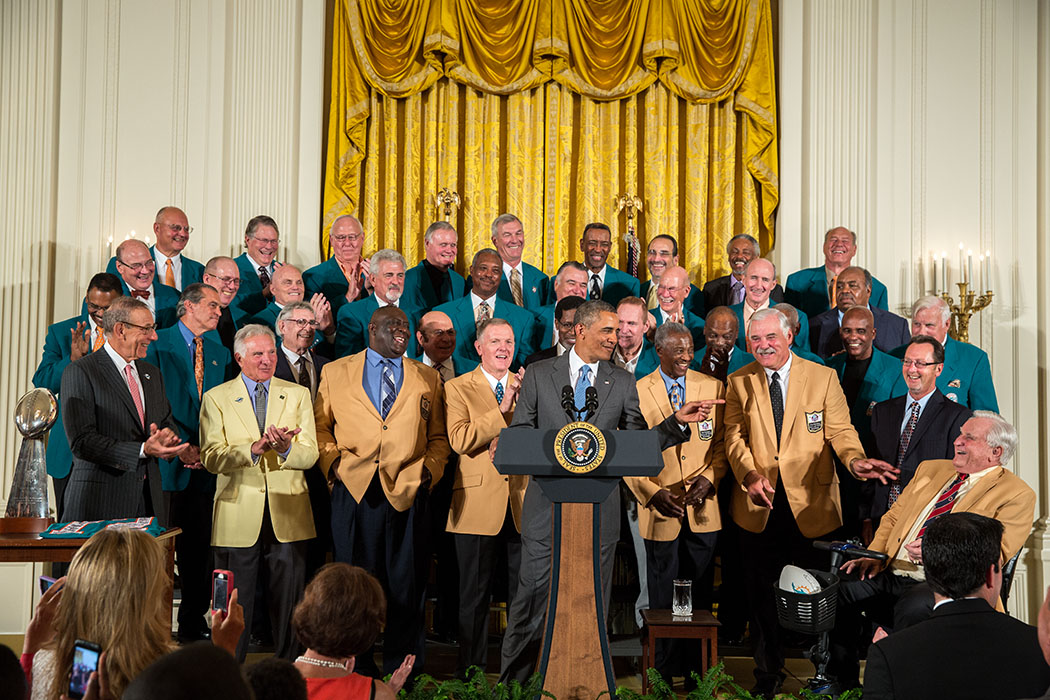 When the Miami Dolphins took to the field at the Los Angeles Coliseum on January 14, 1973, history was on the line. After winning every game so far in the season, that Super Bowl Sunday, the Dolphins swept past the Washington Redskins in Super Bowl VII with a 14-7 victory to clinch the championship. With two touchdowns and extra point conversions, the Dolphins became the first team in the NFL to have a perfect season. Now, 40 years after the Dolphins first donned their Super Bowl rings, they remain the only undefeated team in NFL history.

“I know that some people may be asking why we’re doing this after all these years.  And my answer is simple:  I wanted to be the young guy up here for once,” President Obama joked.

But beyond simply feeling young amidst NFL veterans, President Obama emphasized the significance of the 1973 Super Bowl Champions on both sports history and their communities:

Nobody can argue with this record.  Nobody can argue with what all of you have gone on to do after you hung up the shoulder pads for the last time.  Players from this team have gone on to become a minister, a mayor, a doctor, a state senator, a high school counselor, many successful businessmen … So these are all men of accomplishment and character, and it showed on the field and off the field as well. We want to congratulate all of them, and we want to make sure that they’re remembered for not only the history that sports fans will always remember, but also for all the countless contributions that they’ve made in their community as well.

For more on the Dolphins' visit to the White House, check out their Instagram photos below: