August 29, 2013 at 3:58 PM ET by Doug Rand, Tim Raftis
Twitter Facebook Email
Summary:
Last month, at a DC-based startup campus called 1776, 16 startup accelerators gathered—but with an unusual twist. Instead of pitching to profit-motivated investors, the accelerators pitched to a group of foundations to make the case for why these philanthropic organizations should expand their support for services aimed at helping new startups.

Teams of entrepreneurs often come together in programs known as “startup accelerators” to learn from mentors, hone their products, and ultimately make pitches to investors—whose early support can make all the difference between a company’s successful launch and a good idea gone unfunded. Last month, at a DC-based startup campus called 1776, 16 startup accelerators gathered—but with an unusual twist. Instead of pitching to profit-motivated investors, the accelerators pitched to a group of foundations to make the case for why these philanthropic organizations should expand their support for services aimed at helping new startups.

A joint project of the U.S. Small Business Administration (SBA) and the Global Accelerator Network (GAN), this Accelerator Demo Day was just the latest example of the Obama Administration’s commitment to an all-hands-on-deck approach to supporting startups as a key element of growing the American economy. The event provided a great opportunity for a range of startup accelerators focused on education, healthcare, retail, and other industries to forge relationships with an expanded set of potential partners. And it highlighted the great economic potential that startup accelerators in general can help to nurture in cities and states across the country.

In her opening remarks at the event, SBA Administrator Karen Mills talked about the important role that startup accelerators play in the entrepreneurial ecosystem:

The accelerators here today are playing a critical role in stimulating entrepreneurship – many doing so outside of traditional startup hubs. And that is critical to accelerating economic growth, job creation, and America’s long-term global competitiveness. What we’re focused on at the SBA, and across the Administration, is how we make sure that entrepreneurs can better plug into accelerator networks – and that accelerators, like the ones we will hear from today, have the resources, best practices and relationships to support more successful startups.

President Obama is no stranger to startup accelerators, and paid a visit to one—the Capital Factory—during his trip to Austin, Texas, in May. There he announced an Executive Order directing that government-held data be made more accessible to the public and to entrepreneurs, to be available as fuel for innovation and economic growth. He was clearly inspired by what he saw at that accelerator: “Everywhere you turn, somebody has a got a new idea,” he said. “They’re all thinking big. They’re taking risks. It’s exciting.”

You can watch a short video of the President’s visit here. 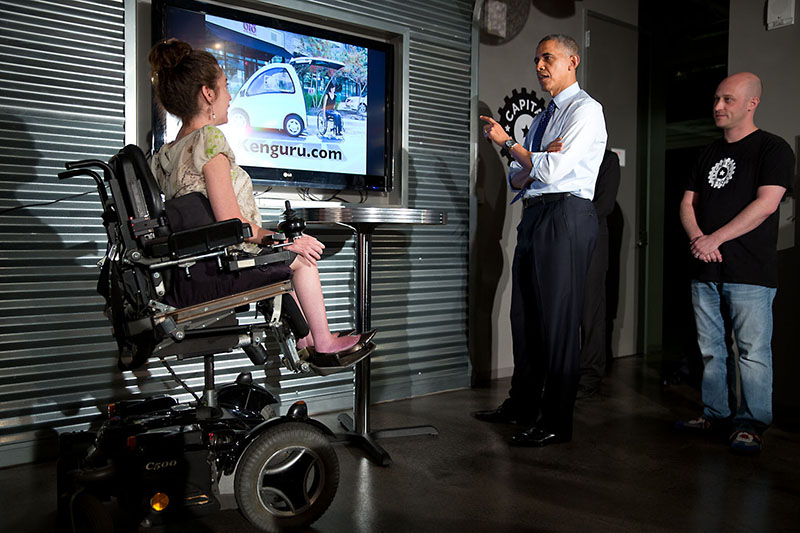 President Barack Obama listens to a presentation about a new car that you can drive a wheelchair into, at Capital Factory in Austin, Texas, May 9, 2013. (Official White House Photo by Pete Souza)

As part of the Startup America initiative that was launched to accelerate high-growth American entrepreneurship, the Obama Administration has supported startup accelerators across the country, through competitive programs like the i6 Challenge and the Jobs and Innovation Accelerator Challenge.  The Department of Veterans Affairs provided crucial early funding for VETransfer, an accelerator that focuses on startups founded by military veterans.  To expand these efforts, the President has proposed an additional $5 million in competitive funding for exceptional startup accelerators in his FY14 budget request.

In addition to attracting promising entrepreneurs from all over the Nation, startup accelerators are often the first port of call for foreign entrepreneurs who want to create jobs and become Americans over time. Unfortunately, too many find that current immigration laws prevent them from starting companies here. This is one more reason why the Nation needs commonsense immigration reform—so the United States can continue to attract the best and brightest immigrant entrepreneurs from around the globe to grow local economies and enhance American competitiveness.