September 11, 2013 at 10:50 AM ET by Ambassador Michael McFaul
Twitter Facebook Email
Summary:
Despite a packed G-20 schedule filled with meetings on economic issues and the situation in Syria, President Obama also took the time while in St. Petersburg to meet with representatives of Russia’s civil society.

Despite a packed G-20 schedule filled with meetings on economic issues and the situation in Syria, President Obama also took the time while in St. Petersburg to meet with representatives of Russia's civil society. He holds such meetings in nearly every country he visits, because, as he told these leaders, he believes that "a country's strength ultimately comes from its people and that as important as government is -- and laws -- what makes a country democratic and effective in delivering prosperity and security and hope to people is when they've got an active, thriving civil society." These engagements are an opportunity not only to hear candid views about the country in which these representatives live, but also about the United States.

The meeting in St. Petersburg was no exception. The President, National Security Advisor Susan Rice, and I met with a fascinating group of activists that included Boris Pustyntsev, Ivan Pavlov, Yevgeniya Chirikova, Yana Yakoleva, Dmitry Makarov, Igor Kochetkov, Yelena Milashina, Olga Lenkova, and Pavel Chikov. The group represented a broad cross-section of Russian NGOs and activists who work on issues such as human rights, the environment, media freedom, rights of business entrepreneurs, LGBT rights, and fighting corruption, racism, and discrimination. 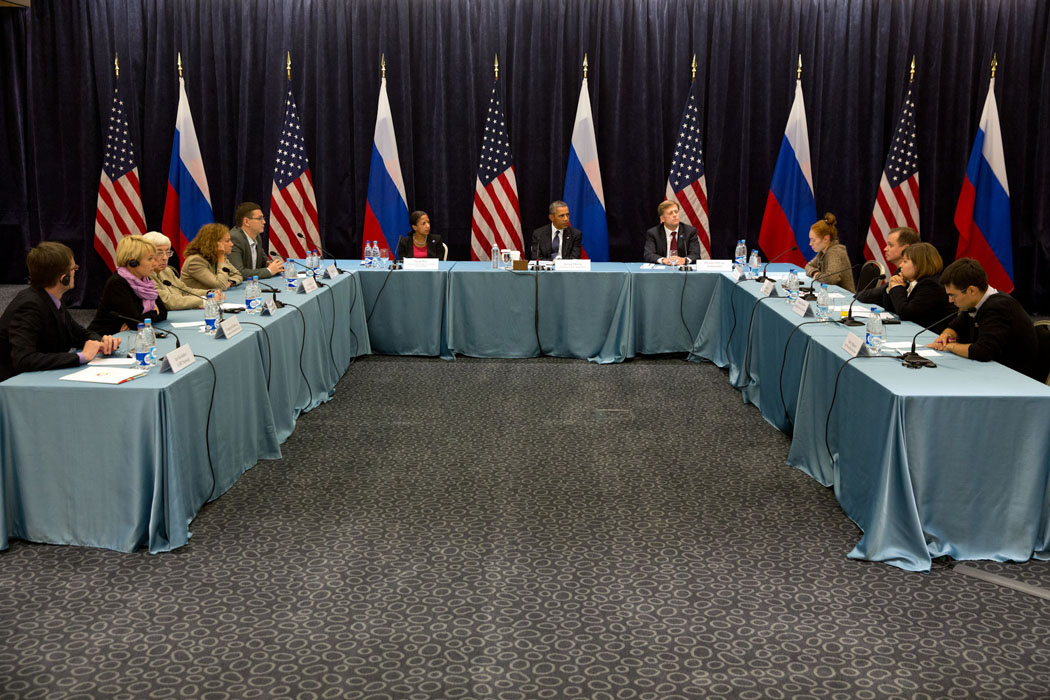 Our colleagues gave President Obama a strong sense of the challenges facing civil society leaders in Russia today, especially new laws that place restrictions on foreign-funded NGOs and discriminate against the LGBT community. Like others around the world, the President has been following with particular concern the increased climate of intolerance and violence that have accompanied the new law affecting the LGBT community, and he had the chance to hear from two courageous LGBT activists from St. Petersburg who described the challenging environment for their work. Participants urged him to keep human rights, including LGBT rights, on his agenda; to correct mischaracterizations of American policy and laws (especially the false analogy between Russia's "foreign agent" law and U.S. legislation on lobbying); to empower multilateral organizations to pressure the Russian government to meet its international commitments; and to stand up against discrimination and for freedom of assembly and expression.

The President learned not only about the situation in Russia but also how the Administration's policies on the environment, whistle-blower protections, and Syria affect the work of civil society activists in Russia. President Obama acknowledged the complexities of balancing national security and individual rights on a variety of issues, but he also expressed faith in the power of American democratic institutions, including a free press, to provide the proper context for resolving specific issues and ultimately to make the American system more democratic. President Obama gave particular attention to the role of civil society in making governments more representative and accountable. He noted his own background as a community organizer, highlighting the significant and important role civil society plays in bettering the lives of ordinary people.

President Obama carefully took notes and responded to all of the questions raised during the meeting. He was clearly energized intellectually and inspired. A meeting planned for forty minutes turned into almost an hour-and-a-half interactive discussion. The President pledged to consider every concrete proposal and later tasked me to follow up on some practical ideas proposed by our roundtable participants.

In the car ride to the Air Force One after the event, the President commented on the articulate, passionate, and practical presentations these leaders had made, and we had a very wide-ranging discussion about civil society in Russia, civil society and human rights around the world, and democracy more generally. After two long days at the G-20, I was struck by how invigorated the President seemed after the discussion.

I thank our Russian participants for such a stimulating session and, like the President, applaud their courageous and important efforts in Russia.