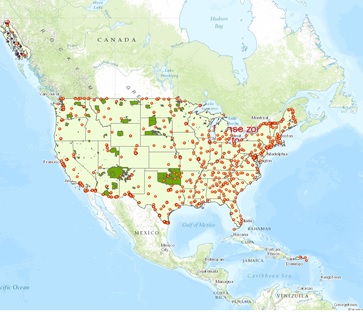 This interactive map displays Federally owned buildings and lands, with point of contact information, where a commercial antenna installation might be sited. The map also contains several layers of data useful to broadband deployment. The map layers offers visibility into, for example, the location of National parks, protected wilderness areas, and lands of tribal significance. (Screenshot from 9/16/13)

These are just a few examples of advances resulting from the Working Group’s efforts over the past year to identify challenges in deploying broadband infrastructure and develop solutions to improve the process.
While much work remains ahead, the Obama Administration is committed to continued collaboration across all levels of government and with the private sector and general public to help accelerate broadband deployment and drive meaningful community outcomes.
Ron Hewitt is the Director for the Office of Emergency Communications at the U.S. Department of Homeland Security and Martha Benson is the Public Buildings Service Assistant Commissioner at the General Services Administration’s Office of Real Property Asset Management. Ron Hewitt and Martha Benson are the Co-Chairs of the Broadband Deployment on Federal Property Working Group.