America’s Uninsured: Progress and Prospects for 2014

September 17, 2013 at 1:30 PM ET by Chris Jennings
Twitter Facebook Email
Summary:
The Census Bureau released estimates of the number of Americans who lacked health insurance in 2012, and the Department of Health and Human Services (HHS) estimated that nearly 6 out of 10 uninsured Americans could be able to access low-cost, high value health insurance for under $100 per person per month starting in 2014.

Earlier today, the Census Bureau released estimates of the number of Americans who lacked health insurance in 2012, and the Department of Health and Human Services (HHS) estimated that nearly 6 out of 10 uninsured Americans could be able to access low-cost, high value health insurance for under $100 per person per month starting in 2014. The numbers indicate that the President’s policies are making progress in expanding access to affordable health care – progress that will accelerate in the months ahead, as the Affordable Care Act creates simple new ways for every American to get the secure health care coverage they deserve. 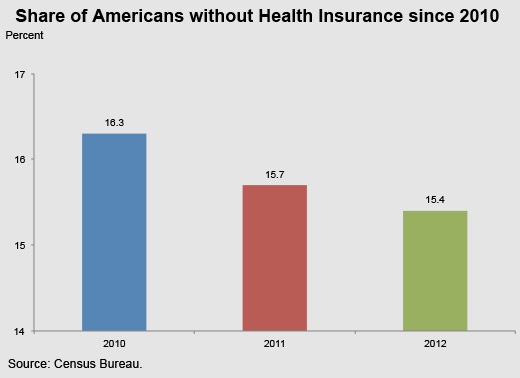 The declines in uninsurance were especially large for young adults ages 19-25. From 2011 to 2012, the share of young adults in this age group without insurance declined by 0.5 percentage points to 27.2 percent, which tied the largest drop for any age group in 2012 and which comes on the heels of a sharp 3.7 percent decline from 2009 to 2011. Research has found that most of the recent coverage gains in this age group can be attributed to the ACA’s provision allowing young adults to remain on their parents’ health insurance plans through age 25.

Stepping back, the Census data also highlight the progress we have already made in ensuring that children have access to health insurance. In 2012, the share of children under 18 without health insurance fell to 8.9 percent, substantially lower than the overall uninsurance rate of 15.4 percent. This rate of uninsurance among children is the lowest since the Census Bureau implemented its current method for measuring insurance status in 1999, and very likely the lowest since Census began collecting data on children’s insurance status in 1987 (after adjusting for methodological changes). It is the fruit, in part, of more than two decades of bipartisan effort to expand access to care for children through the Medicaid program and the Children’s Health Insurance Program, most recently via the Children’s Health Insurance Reauthorization Act of 2009, which President Obama signed into law in one of his first acts as President in February 2009. 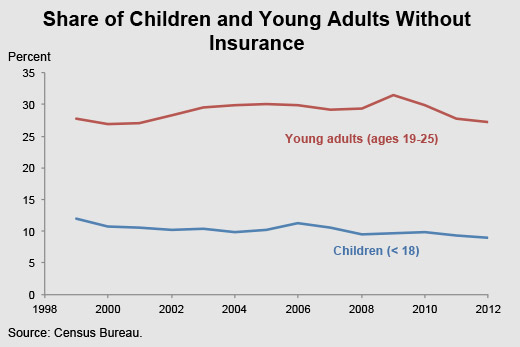 And contrary to the claims of ACA opponents that the ACA would accelerate the disappearance of employer coverage, the Census data showed a continued stabilization in the share of Americans with private insurance. The share with private insurance was stable in 2012, while the share with insurance through their employer declined 0.2 percentage points, considerably smaller than the 1 percentage point annual rate of decline in private and employer-provided coverage from 2000 to 2010. 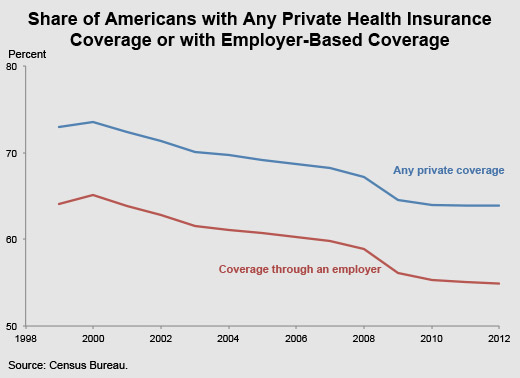 HHS, using another data set from the Census Bureau, estimates that nearly 6 out of 10 uninsured Americans – more than 20 million people -- will qualify for health coverage that costs less than $100 per month per person, including tax credits and Medicaid. This shows that competition, holding insurance companies accountable, and premium assistance for those that need it have great potential to deliver affordable health care insurance options to Americans.

Nearly 8 out of 10 uninsured Americans – more than 30 million people -- would have qualified for health coverage at less than $100 per month per person if all states had expanded Medicaid. In short, over 2 out of 10 uninsured Americans will not qualify for Medicaid in 2014 due to States’ declining to expand Medicaid – even though federal funds would finance 100 percent of the costs of covering this population in 2014.

So today’s news gives us proof that the Affordable Care Act can and will reverse the trends that have led to an increasing number of uninsured Americans, especially among young people.  It gives us confidence that affordable health coverage will be easily in reach for the majority of uninsured Americans in 2014. This majority would soar to 8 out of 10 uninsured Americans if all Governors followed the lead of the Republican Governors in States like Pennsylvania, Michigan, Arizona, and North Dakota. As more Governors prioritize their citizens’ health, their health care infrastructure, and their economy over fighting old political battles, we can together ensure that health care is affordable and accessible to all Americans, providing greater economic opportunity and security for middle class families.