A Nation of Immigrants: Welcoming New Americans to the United States 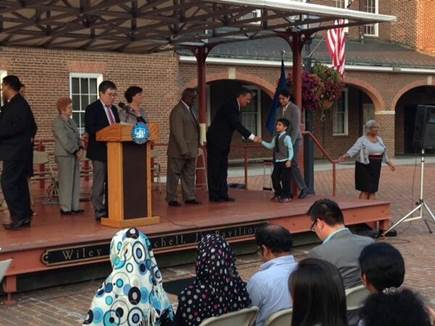 “We are a proud Nation of immigrants, home to a long line of aspiring citizens who contributed to their communities, founded businesses, or sacrificed their livelihoods so they could pass a brighter future on to their children. Each year on Citizenship Day, we welcome the newest members of the American family as they pledge allegiance to our Constitution and join us in writing the next chapter of our national story.”

Last week, I had the honor of joining Mayor Bill Euille in welcoming twenty-five new Americans from fourteen countries during a naturalization ceremony at Alexandria City Hall.  Each participant in the ceremony is a testament to the promise of the American dream that says no matter who you are, where you came from, what your last name is, or what you believe, if you come to America and work hard then you can make it if you try.

I witnessed proof of that dream in Alexandria, a city that just like every other city in America was made great by the immigrants that built businesses, schools and homes and struggled for a better life.

I also saw proof of that limitless possibility looking back at me from the front row in the face of Zofia Dubicka. Zofia came to the United States from Germany at age 3, but only discovered that she was not a U.S. citizen this year, 64 years later.  Her family left Poland at the end of World War II and her parents became naturalized citizens when she was a teenager, but they never filed for Zofia’s citizenship.  Becoming a citizen of the United States, she said, was “to know how my father felt when he experienced becoming a citizen; to be proud, as always, to have been able to live here.”  You can read more about Zofia’s story here.

What this ceremony reminded me is that we are the greatest nation in the history of the world because we are a nation of immigrants.  The story of our wealth and our prosperity is the story of those immigrants who came to our shores and made us stronger, by creating and striving and doing their jobs better than anyone else in the world.

I look forward to seeing what each of our newest citizens writes into the next chapter of the great American story.