President Obama on the Navy Yard Shooting: “We Can’t Accept This”

September 23, 2013 at 11:23 AM ET by Megan Slack, Megan Slack
Twitter Facebook Email
Summary:
On Sunday, President Obama spoke at a memorial service to honor the victims of the Navy Yard shooting, and to thank first responders for their work. President Obama also spoke about the need to prevent future tragedies like the one at the Navy Yard, reiterating that we cannot become complacent. “We can’t accept this,” he stated.

On Sunday, President Obama spoke at a memorial service to honor the victims of the Navy Yard shooting, and to thank first responders for their work.

“We know that no words we offer today are equal to the magnitude, to the depths of that loss,” the President told the families of the victims. “But we come together as a grateful nation to honor your loved ones, to grieve with you, and to offer, as best we can, some solace and comfort.”

President Obama explained that this is the fifth time since taking office that he’s grieved with communities ripped apart by gun violence:

And so, once again, we remember our fellow Americans who were just going about their day doing their jobs, doing what they loved -- in this case, the unheralded work that keeps our country strong and our Navy the finest fleet in the world. These patriots doing their work that they were so proud of, and who have now been taken away from us by unspeakable violence.

Once more we come together to mourn the lives of beauty and to comfort the wonderful families who cherished them. Once more we pay tribute to all who rushed towards the danger, who risked their lives so others might live, and who are in our prayers today, including Officer Scott Williams. Once more our hearts are broken. Once more we ask why. Once more we seek strength and wisdom through God's grace. 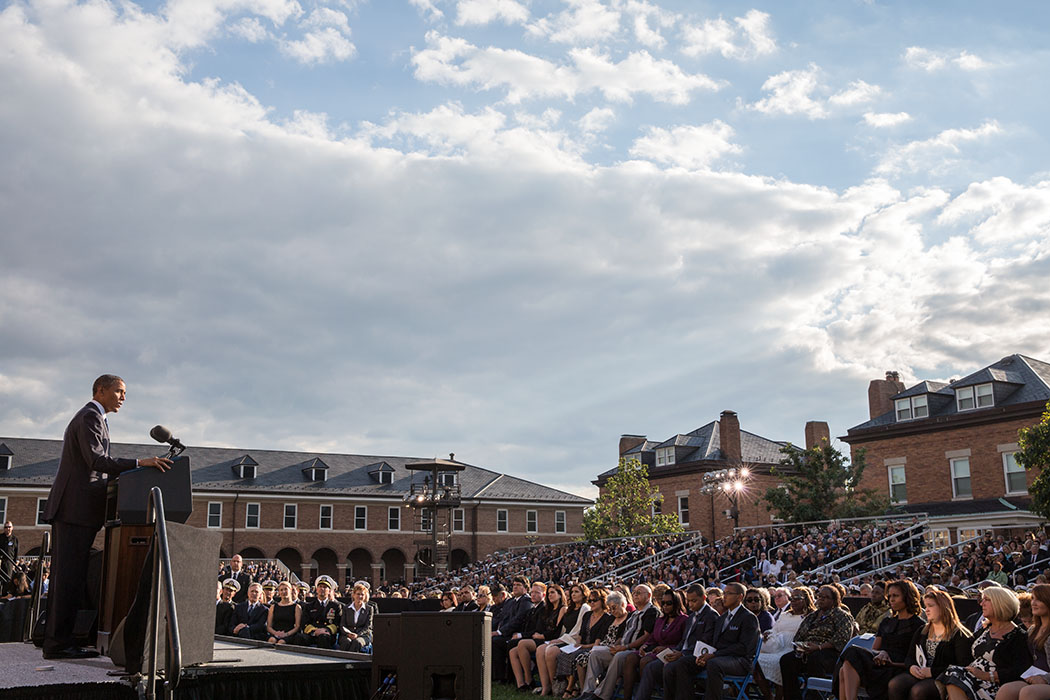 President Obama also spoke about the need to prevent future tragedies like the one at the Navy Yard, reiterating that we cannot become complacent. “We can’t accept this,” he stated.

I do not accept that we cannot find a common-sense way to preserve our traditions, including our basic Second Amendment freedoms and the rights of law-abiding gun owners, while at the same time reducing the gun violence that unleashes so much mayhem on a regular basis. And it may not happen tomorrow and it may not happen next week, it may not happen next month -- but it will happen. Because it's the change that we need, and it's a change overwhelmingly supported by the majority of Americans.

By now, though, it should be clear that the change we need will not come from Washington, even when tragedy strikes Washington. Change will come the only way it ever has come, and that’s from the American people. So the question now is not whether, as Americans, we care in moments of tragedy. Clearly, we care. Our hearts are broken -- again. And we care so deeply about these families. But the question is, do we care enough?

Our tears are not enough. Our words and our prayers are not enough. If we really want to honor these 12 men and women, if we really want to be a country where we can go to work, and go to school, and walk our streets free from senseless violence, without so many lives being stolen by a bullet from a gun, then we're going to have to change. We're going to have to change.