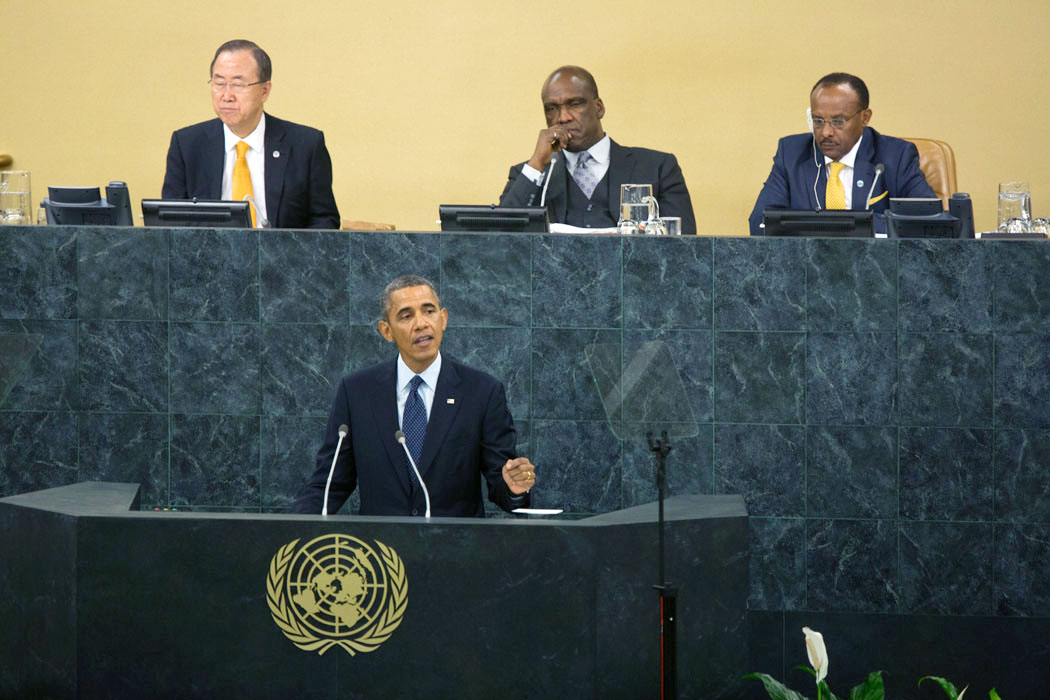 Speaking to the United Nations General Assembly this morning, President Obama expressed optimism at the prospects for diplomacy in solving a range of long-simmering conflicts across the globe.

"For decades, the United Nations has in fact made a difference -- from helping to eradicate disease, to educating children, to brokering peace," he said. "But like every generation of leaders, we face new and profound challenges, and this body continues to be tested. The question is whether we possess the wisdom and the courage, as nation-states and members of an international community, to squarely meet those challenges; whether the United Nations can meet the tests of our time."

Specifically, he focused his remarks on three themes -- the civil war in Syria and the use of chemical weapons by the Assad regime, the potential for diplomatic engagement with Iran, and a revival of peace talks between Israelis and Palestinians.

"The Syrian government took a first step by giving an accounting of its stockpiles," he said. "Now there must be a strong Security Council resolution to verify that the Assad regime is keeping its commitments, and there must be consequences if they fail to do so."

The President also told the General Assembly that he has hopes for a diplomatic solution to Iran’s pursuit of nuclear weapons -- despite decades of mistrust.

"I don’t believe this difficult history can be overcome overnight -- the suspicions run too deep," he said. "But I do believe that if we can resolve the issue of Iran’s nuclear program, that can serve as a major step down a long road towards a different relationship, one based on mutual interests and mutual respect."

Finally, the President urged the entire international community to rally behind the pursuit of peace between Palestinians and Israelis.

"Friends of Israel, including the United States, must recognize that Israel’s security as a Jewish and democratic state depends upon the realization of a Palestinian state, and we should say so clearly," he said. "Arab states, and those who supported the Palestinians, must recognize that stability will only be served through a two-state solution and a secure Israel. All of us must recognize that peace will be a powerful tool to defeat extremists throughout the region, and embolden those who are prepared to build a better future."