We the People is Two Years Old

This week, We the People, the White House petitions platform, turned two years old. And through the past 24 months, it's kept us pretty busy.

We've already issued official responses to more than 200 petitions -- and we've got more on the way. Even those of us who thought this program would be successful weren't expecting this.

Ultimately, We the People has become an incredible way to hear from people about the issues that they care about -- something we've seen again and again in the last year. 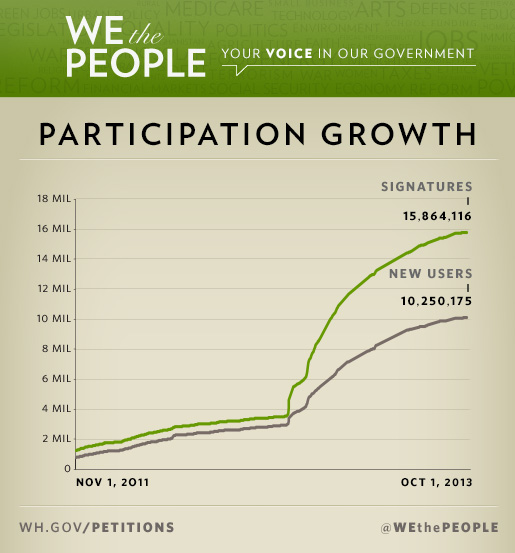 After the tragedy in Newtown, more than 300,000 people wrote in to tell us what they thought about gun violence, and President Obama issued his first video response to a petition. Throughout the year, we've gone back to those signers with updates -- sharing information about executive actions and the legislative process.

More than 114,000 signed a petition asking us to support unlocking cellphones, giving consumers the right to take their phones to different cellular providers -- and we agreed. We kicked off a policy process to evaluate the rule and issued our response, and as legislation works its way through Congress we've taken other action as well: Last week the National Telecommunications and Information Administration asked the FCC to issue new regulations.

We even made some news when we explained why we disagreed with some of our petition signers on other issues. And in one of our most popular responses ever, we explained that we weren't going to build a Death Star, but shared some amazing work in space technology from NASA and DARPA.

For a look at how the policy process for a petition response works, make sure you check out this video.

Since the day we launched, we've worked to make We the People more open and useful. In June, we launched a Read API that makes our public data available to developers who want to build new tools and draw lessons from the platform. We've hosted a number of hackathons to help us improve the API as well as engage with the tech community.

Now we're hard at work on a Write API to give individuals the ability to host White House petitions on their own applications and websites.