October 21, 2013 at 5:45 PM ET by Chris Jennings
Twitter Facebook Email
Summary:
Ohio announces it will join the majority of states and move forward with expanding the Ohio Medicaid program, as called for by the Affordable Care Act. As a result, nearly 270,000 previously uninsured Ohio residents are estimated to gain coverage through Medicaid next year.

As a native Ohioan and former staff member to Senator John Glenn, I’m thrilled that my home state announced today they will join the majority of states and move forward with expanding the Ohio Medicaid program, as supported by the Affordable Care Act.  As the 26th state to expand, Governor Kasich will join a number of other Republican governors in putting aside partisan politics, and recognizing the practical and economic benefits of supporting Medicaid expansion. This is great news for the 270,000 previously uninsured residents, the State’s health care providers, and Ohio economy who will benefit from this expansion.

Leaders across the country are looking at the numbers, and coming to the same conclusion – Medicaid expansion makes sense.  In Ohio, for example, the Health Policy Institute of Ohio estimated, in a joint study with Ohio State University, Urban Institute and Regional Economic Models, Inc., that even after taking into account any increased Medicaid cost for the state, the Medicaid expansion on balance would create between $1.8 – $1.9 billion in net state budget gains over the next 9 years. And, Medicaid expansion will affect Ohio residents in other ways.  The Institute’s analysis finds that Ohio expansion would create more than 27,000 jobs, reduce health care costs for Ohio employers and residents by $285 million and $1.1 billion, respectively, and reduce the number of uninsured by more than 450,000 Ohio residents over the next 9 years.

Ohio is joining a trend we’re seeing across the country where both Republican and Democratic governors and state lawmakers are moving past political rhetoric, and enacting common-sense health policies that provide residents with quality, affordable coverage, reducing the burden of uncompensated care, reducing the population of uninsured, and injecting significant resources into the local economy. States ranging from Arizona to Kentucky to New Jersey are acknowledging the unmistakable reasons for supporting Medicaid expansion. Already, thanks to the opening of the new Health Insurance Marketplaces, and the efforts of states to expand Medicaid, we know that 6 in 10 currently uninsured Americans will have access to health coverage for $100 per month or less next year. And, if every state expanded Medicaid, that number would rise to 8 in 10 Americans.

Today, Ohio has taken an important step to ensure all its residents can benefit from the security of quality health insurance. I am proud of the Buckeye State. 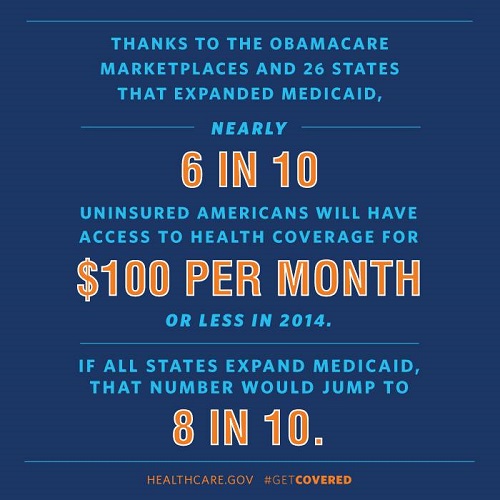