Economic Activity During the Government Shutdown and Debt Limit Brinksmanship

October 22, 2013 at 5:16 PM ET by James H. Stock
Twitter Facebook Email
Summary:
A new report released today by the Council of Economic Advisers attempts to estimate the actual impact of the shutdown and default brinksmanship on economic activity and finds that a range of eight economic indicators are consistent with a 0.25 percentage point reduction in the annualized GDP growth rate in the fourth quarter and a reduction of about 120,000 private sector jobs in the first two weeks of October.

The government shutdown and debt limit brinksmanship have had a substantial negative impact on the economy. A new report released today by the Council of Economic Advisers (CEA) attempts to estimate the actual impact of the shutdown and default brinksmanship on economic activity as measured by eight different daily or weekly economic indicators. Overall it finds that a range of eight economic indicators in what we call a “Weekly Economic Index” are consistent with a 0.25 percentage point reduction in the annualized GDP growth rate in the fourth quarter and a reduction of about 120,000 private sector jobs in the first two weeks of October (estimates use indicators available through October 12th). These estimates very likely understate the full economic effects of the episode because of its effects that continued, and will continue, past October 12th.

The shutdown directly affected the economy by withdrawing government services for a sixteen day period, which not only had direct impacts but also had a range of indirect effects on the private sector. For example the travel industry was hurt by the closing of national parks, businesses in oil and gas and other industries were hurt by the cessation of permits for oil and gas drilling, the housing industry was hurt by the cessation of IRS verifications for mortgage applications, and small businesses were hurt by the shutdown of Small Business Administration loan guarantees. In addition, a reduction in consumer confidence and an increase in uncertainty associated not just with the shutdown but also the brinksmanship over the debt limit affected consumer spending, investment and hiring decisions as well.

The CEA report analyzes eight different indicators including two measures of retail sales, two measures of consumer confidence, two measures of labor market activity, one measure of production, and one measure of housing market activity.  All these series are available on a daily or weekly basis and were released during the shutdown.  Although each is potentially a noisy indicator, together they tell a clear story of a slowdown in consumer sales growth, a worsening in labor markets, a large reduction in consumer confidence, and a worsening housing market all in the first two weeks of October.

To understand what this means for overall economic activity CEA combined these indicators into a “Weekly Economic Index” that is scaled to match the overall growth rate of economic activity. This “Weekly Economic Index” is designed to extract the main common “signal” from the noise of these different indicators. This index measures economic growth, and it is scaled so that its matches the mean and standard deviation of 4-quarter GDP growth from 2008 through the second quarter of 2013.  The index is plotted in Figure 1 below. As discussed in today’s Report, this Weekly Economic Index was designed to estimate the co-movements among these eight indicators, not to predict any particular monthly data series.  Nevertheless, the Weekly Economic Index turns out to be highly correlated with standard monthly measures of economic activity, notably changes in employment (as can be seen in Figure 1) and the growth of industrial production—which is the basis for the estimate that the contraction through October 12th is consistent with a 0.25 percentage point reduction in the annualized GDP growth rate for Q4 and 120,000 fewer jobs created in October. 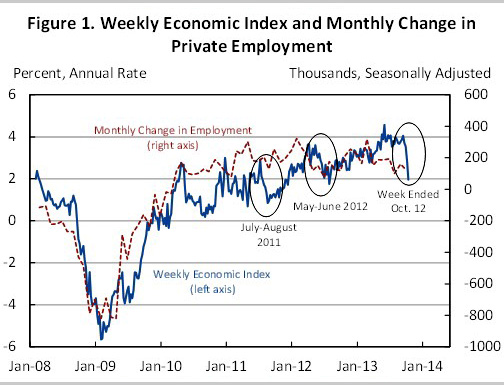