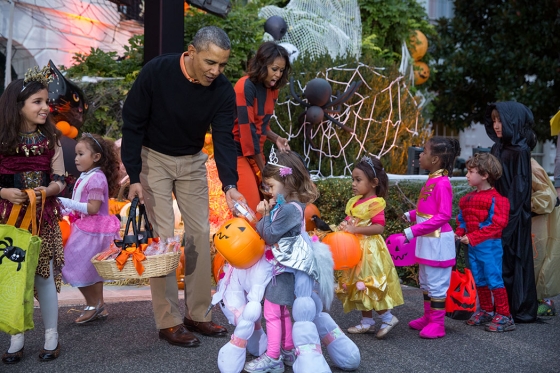 After holding a closed press roundtable with military spouses yesterday afternoon, First Lady Michelle Obama celebrated Halloween by inviting military parents and their children to trick-or-treat at the White House. The White House, adorned with giant spiders and cobwebs, glowed orange while the President and First Lady passed out packages of candy, dried fruit and White House cookies to the children.

Yesterday’s activities were a chance to show military kids how much the country appreciates the sacrifices they make while their parents are serving. As the First Lady has said, their strength and resilience is amazing and an inspiration to us all. To show support and thank our nation’s youngest heroes, Mrs. Obama has made inviting military children to participate in festivities a tradition at the White House.

“When we talk about how our men and women in uniform sacrifice so much and serve this country so bravely, we’re not just talking about your parents,” said Mrs. Obama. “We’re talking about our military kids and our military families, because we know that when your parents are called to serve, you all serve right alongside them.”

On average, most military children will attend six to nine different school systems in their lives from kindergarten to 12th grade. These moves can make it difficult to transfer records, secure spaces in courses, stay included in extra-curricular activities, and complete required testing on time. On top of this, many children experience frequent, multiple deployments of their parents. Despite these challenges, the selflessness and courage of military children are a shining example of service to our country.