November 8, 2013 at 10:08 AM ET by Jason Furman
Twitter Facebook Email
Summary:
Today we learned that total nonfarm payroll employment rose by 204,000 in October. America’s resilient businesses have added jobs for 44 consecutive months, with private sector employment increasing by a total of 7.8 million over that period.

The upward revisions to job growth in August and September, combined with solid third quarter GDP growth reported yesterday, suggest that the economy was gaining traction in the months leading up to the government shutdown. There should be no debate that the shutdown and debt limit brinksmanship inflicted unnecessary damage on the economy in October. The employment report shows differing accounts, with the more reliable payroll survey recording strong job growth and the much noisier household survey showing an increase in the unemployment rate and a large drop in employment. But the mission for Congress remains clear: to take steps that increase certainty, speed growth, and boost job creation.

1. America’s resilient businesses have added jobs for 44 consecutive months, with private sector employment increasing by a total of 7.8 million over that period. Today we learned that total nonfarm payroll employment rose by 204,000 in October, due entirely to a 212,000 increase in private employment. Private sector job growth was revised up for August (to 207,000) and September (to 150,000) so that for the third quarter, private sector employment rose by an average of 152,000 per month (compared to the 129,000 per month average pace estimated in last month’s jobs report). 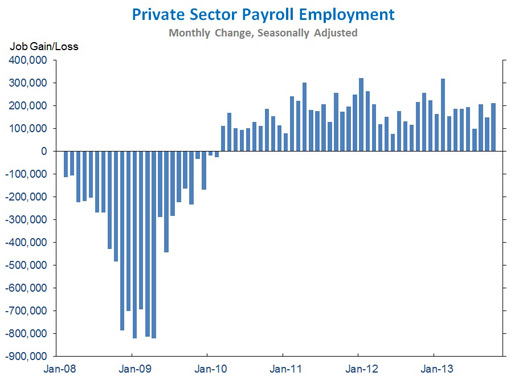 2. Federal employees impacted by the shutdown appeared in two places in the household survey: some reported being on temporary layoff and were counted as unemployed, while others reported being absent from work and were counted as employed. Prior to the release of the data, the Bureau of Labor Statistics said the proper classification for furloughed federal workers was unemployed due to temporary layoff; furloughed federal workers who reported being absent from work were misclassified as employed. As BLS Commissioner Groshen noted today, “Such a misclassification is an example of nonsampling error and can occur when respondents misunderstand questions or interviewers record answers incorrectly. According to usual practice, the data from the household survey are accepted as recorded. To maintain data integrity, no ad hoc actions are taken to reassign survey responses.” While the BLS practice of accepting data as recorded is critical for the consistency and impartiality of our nation’s economic statistics, it is notable that during the survey this month, only a portion of the roughly 400,000 furloughed federal employees were correctly counted as unemployed. 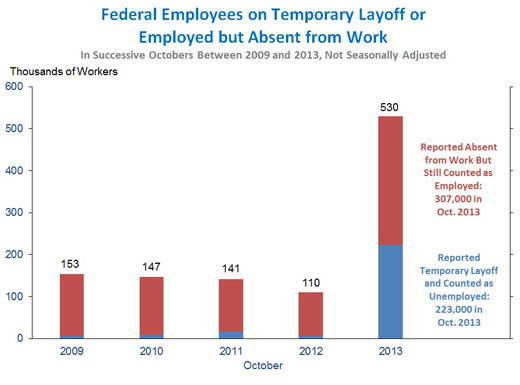 3. One distinctive feature of today’s report is the unusually large divergence between job growth measured in the establishment survey and the decrease in employed workers in the household survey. While nonfarm payroll employment rose by 204,000 in October, household survey employment fell by 735,000. The 939,000 gap between the two surveys is the largest since 1981 (excluding the effect of population control adjustments that can lead to outsize swings in the December-to-January change in the household survey). Until this month’s striking divergence, both surveys had told a similar story over a longer time horizon. As of September 2013, total nonfarm payrolls had risen 2.3 million over the preceding twelve months, while household survey employment (adjusted to be comparable to the concepts used in the establishment survey) rose by a similar 1.9 million. Although the October data disrupted this pattern, history suggests that both surveys will track each other over the long term.

4. Construction employment rose by 11,000 in October and is up 185,000 over the past year, but remains 1.9 million jobs below its previous peak, underscoring the importance of continued strengthening in housing markets and investments in infrastructure. Of the 185,000 increase in construction employment over the past year, the bulk (104,000) is in residential construction, while 65,000 are in non-residential construction, and 16,000 are in heavy and civil engineering construction. The gains in residential construction are consistent with the recovery we have seen unfolding in the housing sector, but additional steps still must be taken to create a more durable and fair system that promotes responsible homeownership. Moreover, the fact that employment in non-residential and heavy and civil engineering construction has grown slowly is an important reminder that we should also be looking for opportunities to invest in America’s roads, bridges, and schoolhouses. . 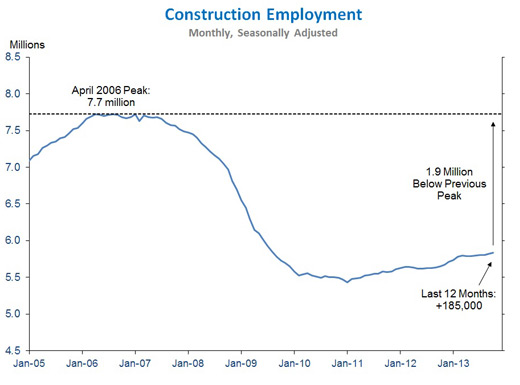 5. Ahead of Veterans Day on Monday, we acknowledge the tremendous debt of gratitude owed to all our nation’s veterans, and the urgency of helping those who recently served find work when they return. The overall unemployment rate for veterans is typically lower than for non-veterans, but this fact masks a large degree of variation depending on the period of service, with the unemployment rate for post-9/11 veterans substantially higher than the unemployment rates for veterans of earlier periods and non-veterans. Directly comparing the employment situation of veterans from different service periods and non-veterans can be difficult because these groups differ substantially on characteristics that are correlated with employment and unemployment rates in the general population. The light blue line shows the hypothetical unemployment rate for non-veterans once adjustments are made so that their gender, age, and education characteristics are comparable to post-9/11 veterans. The lingering gap between the light blue line and the actual unemployment rate for post-9/11 veterans shows that while we have made progress, more must be done to help these veterans find work when they return. Through the Joining Forces campaign led by First Lady Michelle Obama and Dr. Jill Biden, companies have already hired or trained 290,000 veterans and military spouses, with pledges to hire or train another 400,000 more. This Veterans Day, we must all reaffirm our commitment to serving those who have already served and sacrificed on our behalf. 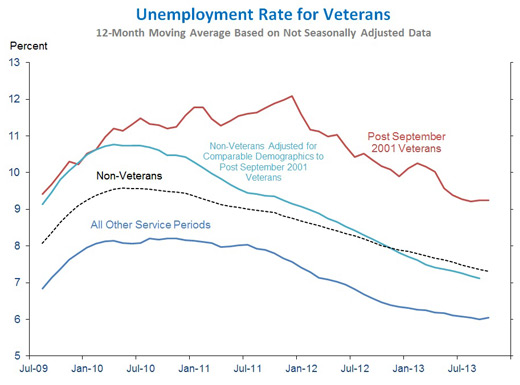