November 12, 2013 at 12:26 PM ET by Zara Rahim
Twitter Facebook Email
Summary:
On Veterans Day, the President honored those, past and present, who put on the uniform and put their lives on the line.

This Veterans Day, the President honored those, past and present, who put on the uniform of the United States military and put their lives on the line. 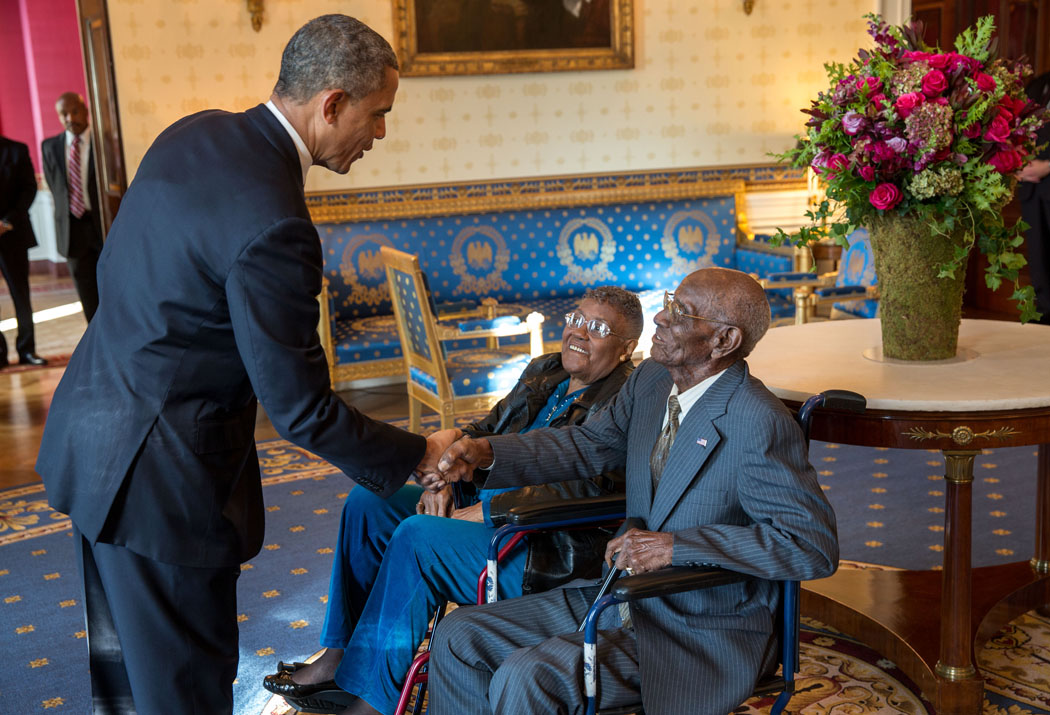 On Monday morning, the President hosted a breakfast in the East Room of the White House for veterans and their families. In attendance was Richard Overton from Austin, Texas. Richard is the oldest living World War II veteran. The President honored the veteran in his remarks at Arlington National Cemetery, and thanked Richard for his selfless dedication and his courage when he faced adversity.

That’s what we owe veterans like Richard Overton, who served in the Army in World War II. He was there at Pearl Harbor, when the battleships were still smoldering. He was there at Okinawa.  He was there at Iwo Jima, where he said, “I only got out of there by the grace of God.”

When the war ended, Richard headed home to Texas to a nation bitterly divided by race.  And his service on the battlefield was not always matched by the respect that he deserved at home.  But this veteran held his head high.  He carried on and lived his life with honor and dignity.

The President, joined by the Vice President, the First Lady, and Dr. Biden, also participated in a wreath-laying ceremony at Arlington National Cemetery, where he spoke of the devoted service that our veterans have given us, meeting every mission this country has asked of them.

In the life of our nation, across every generation, there are those who stand apart.  They step up, they raise their hands, they take that oath.  They put on the uniform and they put their lives on the line.  They do this so that the rest of us might live in a country and a world that is safer, freer, and more just.  This is the gift they’ve given us.  This is the debt that we owe them.

President Obama also reminded Americans that our obligation to our troops isn’t only supporting them during wartime, but it is also up to us to care for them when they finally come home. “This is how we’ll be judged.  Not just by how well we care for our troops in battle, but how we treat them when they come home -- and by the America we build together; by what we do with the security and peace that they have helped grant us; by the progress that allows citizens from Richard Overton to Jacare Hogan to play their part in the American story.

Watch the President's full Veterans Day remarks below or on YouTube: