November 12, 2013 at 4:40 PM ET by Eric K. Shinseki
Twitter Facebook Email
Summary:
Our gratitude for Veterans should not be a one day a year event, but an abiding commitment on every day of every year.

Ed. note: This is cross-posted from the Department of Veterans Affairs blog. See the original post here.

Last month, President Obama awarded the Medal of Honor to former Captain William D. Swenson, United States Army, for heroism and gallantry above and beyond the call of duty in the Battle of the Ganjgal Valley on September 8, 2009. 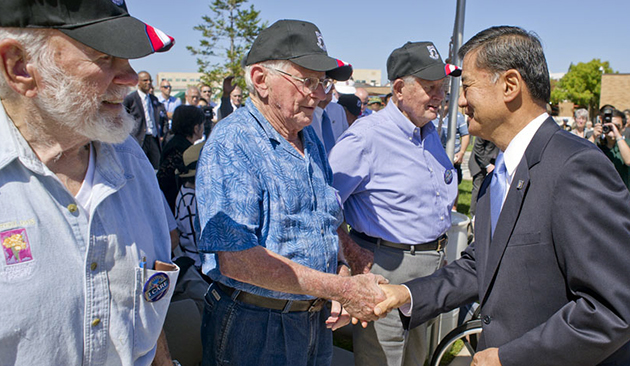 During 6 hours of intense combat, Captain Swenson did everything expected of leaders and more—keeping his ambushed unit fighting effectively, directing available fires, evacuating the wounded, and leading by example in repeatedly risking his personal safety to retrieve wounded Soldiers and Marines, Afghan allies, and fallen comrades.

Captain Will Swenson would tell you that there were many more heroes in the Ganjgal that day.

In the President’s words, “[In] moments like this, Americans like Will remind us of what our country can be at its best—a Nation of citizens who look out for one another; who meet our obligations to one another, not just when it is easy, but also when it’s hard.  Maybe, especially when it’s hard.”

At the Department of Veterans Affairs (VA), we are honored to walk amongst, as well as work with, such heroes every day.

Today, less than 1% of our population shoulders the responsibilities of our national defense through their service in uniform, and just over 7% of all living Americans are Veterans.  Veterans Day presents the opportunity to ask ourselves, “For their selfless service and willing sacrifice, what do Veterans need and deserve?”

What Veterans deserve is access to high quality and safe healthcare, benefits and services that buoy them against the rigors of military service, education that prepares them fully for their next success, safe and affordable housing, and meaningful and satisfying employment. At VA, we are privileged to deliver on the promises of the American people to those from whom we ask everything.

In the last 5 years, we have enrolled more than two million Veterans into VA healthcare.  Since March of this year, we have reduced the backlog in compensation claims from a record high of 611,000 to about 400,000, a decrease of 211,000 claims in 230 days—while increasing the accuracy of claims we process. We will eliminate the backlog in compensation claims in 2015.

We also committed to ending Veterans homelessness in 2015.  Between 2009 and 2012, during a period of prolonged economic recovery, we have reduced the number of homeless Veterans by 17%, breaking previous patterns of increased homelessness during difficult economies. More needs to be done, but we have achieved a remarkable reversal.  We expect another decrease this year.

Our gratitude for Veterans should not be a one day a year event, but an abiding commitment on every day of every year. There must be no question that this large and powerful country will meet its obligations to them with the same urgency, skill, and determination as it deploys them on critical missions when our Nation calls.

On this Veterans Day, every Veterans Day hereafter, and every day between them, Veterans must know that this Nation will keep Lincoln’s promise to care for those “who shall have borne the battle” and their families.

I am honored to serve with the dedicated people of VA, and we are all privileged to serve with a President who has provided over a 56% increase to our budget requests so we can provide for the 7% of Americans, who are Veterans, what they need, deserve, and have earned. They answered their calls to duty; let us continue to answer ours.