Here's Why Today's Filibuster Rule Change is a Big Deal

November 21, 2013 at 4:19 PM ET by Lindsay Holst
Twitter Facebook Email
Summary:
Today, a majority of senators voted to change the way the filibuster works -- and the President spoke about exactly why that change is so important.

Something big happened in the Senate today: A majority of senators voted to change the way the filibuster works. (You can read more about what a filibuster does here.)

Under today's rule change, all executive branch and judicial nominees -- except to the Supreme Court -- can be confirmed with a simple up-or-down vote rather than the previously required 60-vote supermajority.

Speaking from the White House Press Briefing Room today, the President supported the change and provided context for why it's especially pertinent right now:

All too often, we've seen a single senator or a handful of senators choose to abuse arcane procedural tactics to unilaterally block bipartisan compromises, or to prevent well-qualified, patriotic Americans from filling critical positions of public service in our system of government.

Now, at a time when millions of American have desperately searched for work, repeated abuse of these tactics have blocked legislation that might create jobs. They've defeated actions that would help women fighting for equal pay. They've prevented more progress than we would have liked for striving young immigrants trying to earn their citizenship. Or it's blocked efforts to end tax breaks for companies that are shipping jobs overseas. They've even been used to block common-sense and widely supported steps to protect more Americans from gun violence, even as families of victims sat in the Senate chamber and watched.  And they've prevented far too many talented Americans from serving their country at a time when their country needs their talents the most.

As the President went on to note, in the six decades before he took office, only 20 presidential nominees to executive positions had to overcome filibusters. "But in just under five years since I took office, nearly 30 nominees have been treated this way," the President said.

In other words, half of all filibusters waged against nominations in our country's history have been waged under President Obama. And of the 23 district court nominees that have been filibustered in U.S. History, 20 of them have been Obama nominees. 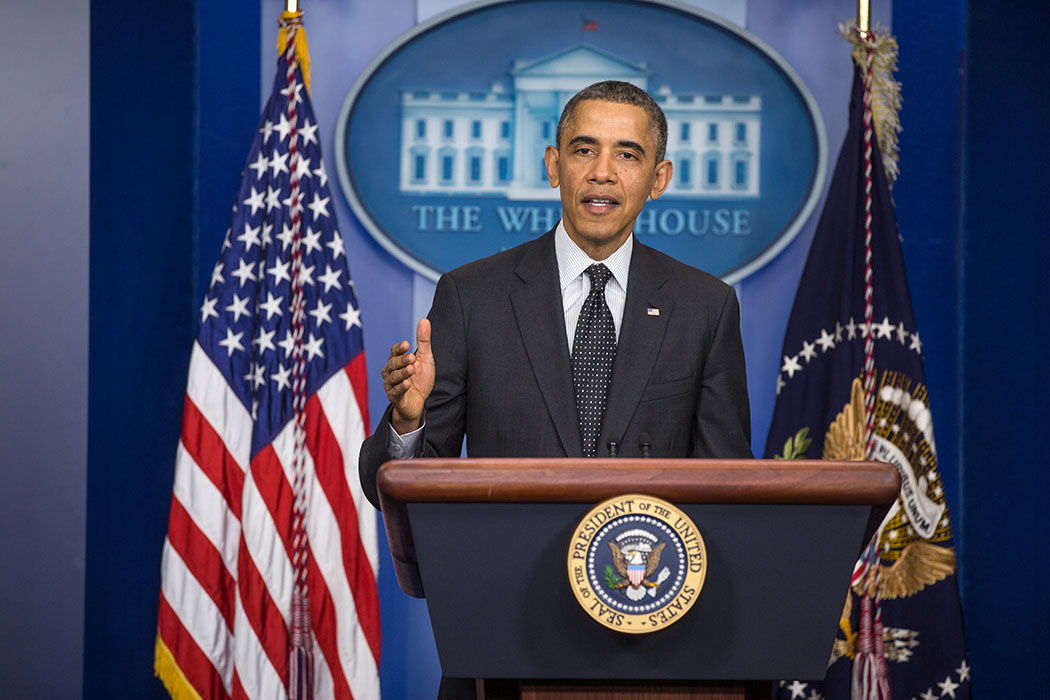 And so, the President said, "Enough is enough."

The American people's business is far too important to keep falling prey, day after day, to Washington politics.

I'm a former senator.  So is my Vice President.  We both value any Senate's duty to advise and consent.  It's important, and we take that very seriously.  But a few now refuse to treat that duty of advise and consent with the respect that it deserves.  It's no longer used in a responsible way to govern.  It's rather used as a reckless and relentless tool to grind all business to a halt.  And that's not what our Founders intended, and it's certainly not what our country needs right now.

And I just want to remind everybody, what's at stake here is not my ability to fulfill my constitutional duty. What's at stake is the ability of any President to fulfill his or her constitutional duty. Public service is not a game.  It is a privilege. And the consequences of action or inaction are very real. The American people deserve better than politicians who run for election telling them how terrible government is, and then devoting their time in elected office to trying to make government not work as often as possible.

Earlier this week, Deputy Senior Advisor David Simas sent an email to the White House list about all of the important national measures Congress could be taking action on right now -- if only they'd let these measures come to a vote.

These are measures that mean very real things for our economy and millions of Americans: from reforming our immigration system to confirming qualified individuals to lead critical organizations and sit on important courts.

And today's vote could mean that we start seeing real action on some of them.