November 21, 2013 at 9:22 AM ET by Connor Schmidt
Twitter Facebook Email
Summary:
In September, after beating out thousands of contestants from around the globe, Eric Chen, Ann Makosinski, Viney Kumar, and Elif Bilgin were triumphantly presented large, LEGO-made trophies as winners of the 2013 Google Science Fair. I recently asked the four winners about their experience at the Fair, plans for the future, and importance of science, technology, engineering, and mathematics (STEM) education. 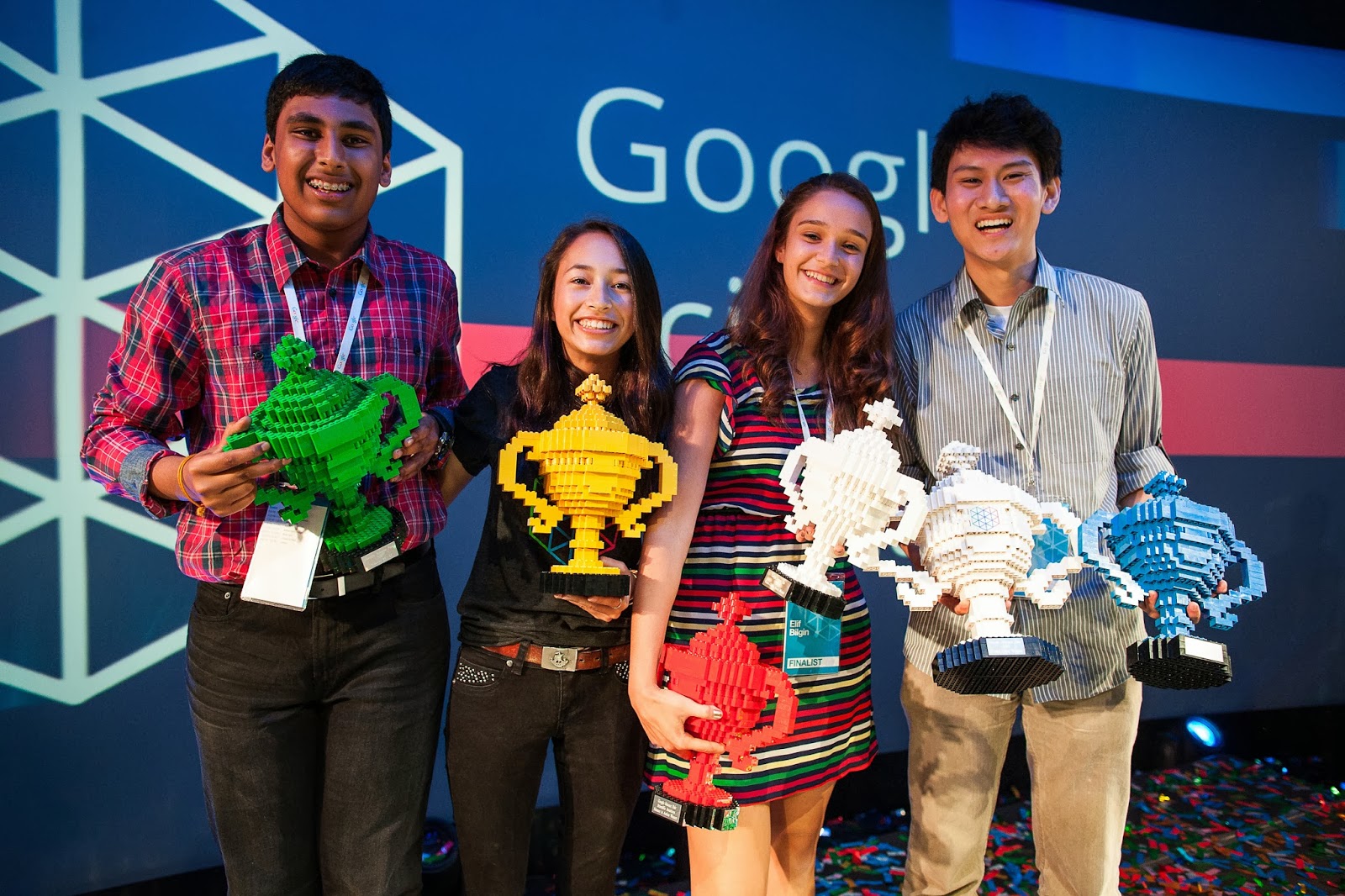 In September, after beating out thousands of contestants from around the globe, Eric Chen, Ann Makosinski, Viney Kumar, and Elif Bilgin were triumphantly presented large, LEGO-made trophies as winners of the 2013 Google Science Fair. Sponsored by Google, LEGO, the Geneva-based European research organization CERN, National Geographic, and Scientific American, the Google Science Fair gives young scientists a platform without borders to showcase their ideas and work. A panel of international judges — including astronauts, professors, journalists, and more — selected winners in three age categories, while the Internet community picked a Voters’ Choice Award winner. I recently asked the four winners about their experience at the Fair, plans for the future, and importance of science, technology, engineering, and mathematics (STEM) education.
Eric Chen from San Diego, CA, was both the Grand Prize and 17-18 Age Group winner, selected for his new approach to discovering anti-flu medicine. His reward for winning the Fair? A ten-day expedition to the Galápagos Islands with National Geographic; college scholarship; trip to one of the sponsoring organizations; and, for his school, a grant from Google and digital access to Scientific American’s archives. Eric agreed to guest-blog for OSTP about his project and involvement in the STEM community:
My project combined computer modeling and simulation with biological testing to speed up the discovery of new anti-flu medicine. I was asking a biological question, but used a computational approach to help answer it. With a supercomputer, I was able to do virtual screening of a large number of chemicals instead of actually testing all of them on the bench, saving a lot of time and effort. Many times innovation comes from outside the field, and I believe that interdisciplinary collaboration is the future for science.
At international science fairs, I have been able to meet amazing young competitors as well as some of the top scientists from all over the globe, and hearing their stories has really shown me countless examples of how innovative thinking can lead to solutions to real world problems. Our future will need more scientists and engineers to help tackle tough problems on the horizon, from the growing population to environmental issues. I have been performing STEM outreach, hoping to encourage younger students to become more interested in the sciences, and having the Google Science Fair prize as a platform has really helped me do this—I have been able to reach out to many students and show them that they have the potential to change the world through research. I hope that bringing bright minds into the field will lead us to a better tomorrow.
Eric’s enthusiasm for working with other young scientists highlights the importance of events such as the Google Science Fair in promoting collaboration around the globe. His feelings were shared by the other winners, especially Viney Kumar, the 13-14 Age Group winner from Australia, who developed a signaling system to alert drivers when Emergency Response Vehicles (ERVs) are in traffic behind them. Meeting international students was critical, he thought, because “we realized we could complement each other’s skills and maybe build something greater than we could individually, and this definitely changed my outlook.”
Ann Makosinksi, the 15-16 Age Group winner from Canada, was similarly encouraged by such cooperation, saying: “if young scientists like us can do it, so can other scientists and politicians.” Her project won for the development of a flashlight powered solely by the heat from a human hand. In fact, all the winners had a desire to improve the world around them, because, as Ann said, “the most inspiring part of it all is that science benefits all of humanity.” This concern for others shows why “everyone should get a level of science education,” according to Elif Bilgin, the Voter’s Choice Winner for her project creating environmentally friendly bioplastics from banana peels, “because not only does it raise awareness in preventing or fighting problems we may have (such as diseases or environmental problems) but it also helps us know more about ourselves and the world we live in.”

As for the future, the young scientists plan to keep improving their projects. Viney hopes to work with Google to implement his alert system at a local level in Australia, Ann wants to make her flashlight as bright as commercial ones, and Elif is working on patenting her plastics. Plus they have to handle all the daily pressures that come regardless of scientific achievement — like college applications!

Events such as the Google Science Fair highlight the incredible accomplishments that can be achieved by young scientists in conjunction with continued dedication towards STEM funding and education from both the private sector and Federal Government. President Obama has continually demonstrated commitment to strengthening STEM education in America, and has committed to producing 10,000 new, high-quality STEM teachers and aid existing ones with $100 million in funding. “Leadership tomorrow depends on how we educate our students today—especially in science, technology, engineering and math," the President said in 2010, while honoring science teaching and mentoring award winners. Considering Eric, Ann, Viney, and Elif, it looks like we’re off to an inspiring start. OSTP congratulates the winners on their projects and wishes them all the best for the future.

Learn more about the Google Science Fair at: https://www.googlesciencefair.com/

Connor Schmidt is a Student Volunteer on the OSTP Communications Team